Entrepreneur Amanda Peyton has always been “the friend that’s good with money,” whether as the treasurer of her high school at age 16 or today as the founder of Braid, a company that wants to make shared wallets more mainstream among consumers.

“People are terrified by money, so I need to lean into it so it will never become scary for me,” she told TechCrunch. “That’s when I had this lightbulb moment: All financial products are either built for individuals or businesses, and so all social money interactions that we have are built around individual accounts.” The resulting separation can amplify stress around money, especially when one person has to become the CFO of a household, family, or friend group.

Founded in 2019, group-financing platform Braid is trying to make transactions work for various entities, from shared households to side hustles to creative projects. It recently launched a new twist on consumer payment links: People can set up a Braid Pool around any effort — a fund for this summer’s Italy trip, shared car gasoline expenses, or a kitty to put toward monthly book club snacks — and then send a link to friends who want to put cash in. The money then goes directly into the wallet and the creator can either manage it solo or together with participants.

Over 90,000 pools have been created since Braid first beta-tested the product in January.

“The guiding question for us has always been, ‘How do we make sharing money not suck?’” Peyton said.

Despite the rise of services like Cash App, Venmo, Zelle, and Splitwise, as well as smaller multiplayer fintechs like Zeta, Braid doesn’t think shared wallets exist in a mainstream way yet. It is built specifically to help groups of people pay for the next thing they do together, not split the money after a meal or gather money for a present that one person is going to go out and buy.

Money is complicated, so I’ll put it this way: While some costs only need one person to put their card down, others, such as an ongoing savings fund to splurge on the bachelorette trip, could benefit from multiple people having the power to “spend” from a pool.

Crowdfunding gives the semblance of pooling money, but has its own type of silos, Peyton said.

“After we raise all this money on GoFundMe, you’ve gotta send it somewhere else, and usually that is someone’s bank account — so there’s no spending the money together,” Peyton said. “As far as I know, there’s no debit card to spend the money.” Braid wants to be the place that you collect, manage, and spend out of. 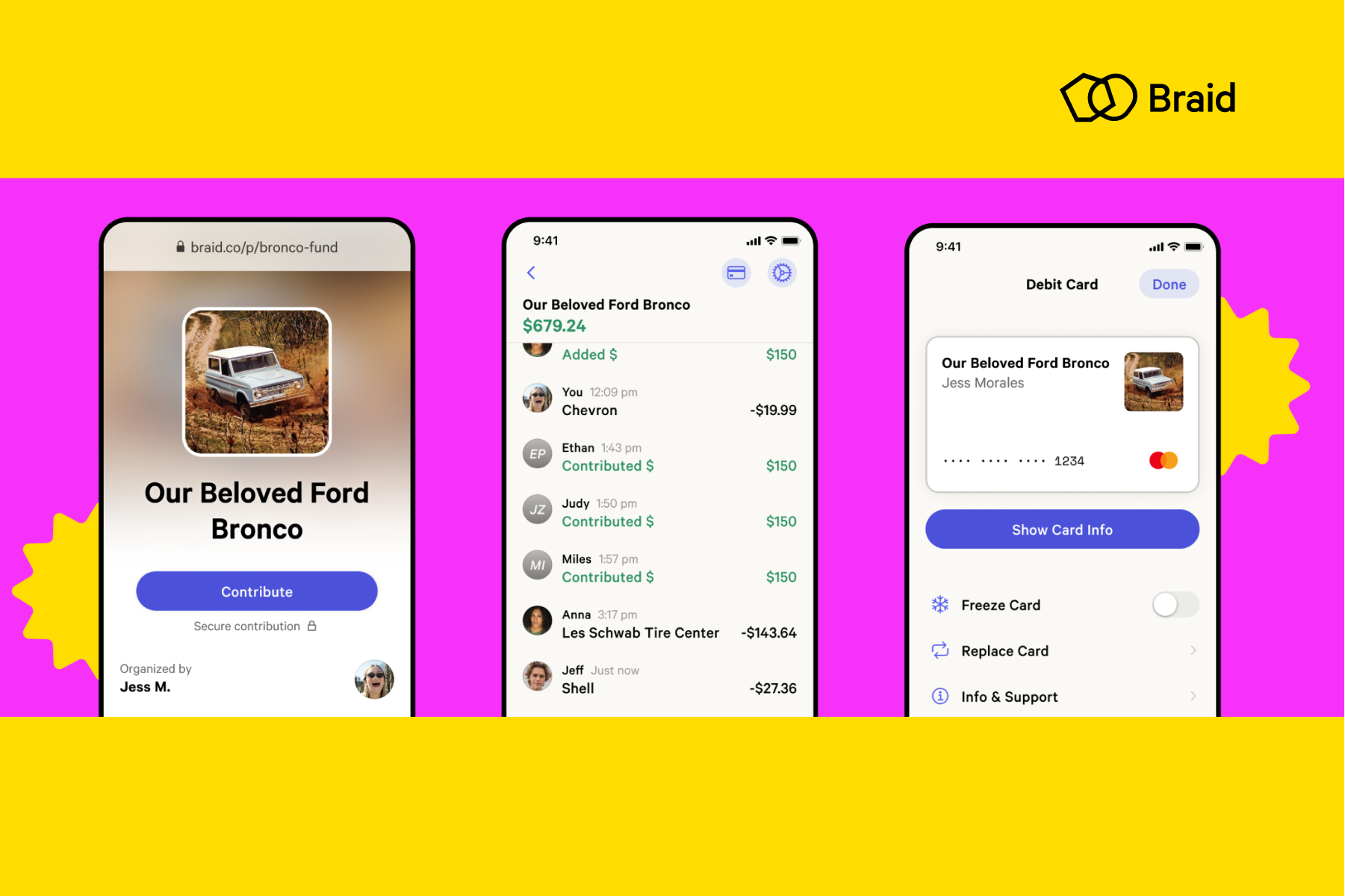 Peyton explained that she hopes her company can be the middle ground between the friend that is always on top of splitting the bill at the end of dinner and the one who gets overwhelmed at calculating and dividing up the tip. Ease of use is important: Each pool has its own account number and banking number, so participants can directly deposit a portion of their paycheck into a pool each month. Each pool also comes with its own physical or digital debit card — and interchange fees are where Braid makes its main source of revenue.

Transparency into money goals and boundaries is a side effect of using Braid, which is important to the founder, and, in her view, missing from the general fintech landscape right now.

There are, of course, technical challenges with grouping people’s money together.

Fintech Roundup: Fintechs and banks are getting cozier

As it scales, money gets more complicated. How do you get a cohort of people to trust each other if all have access to the same pool of money? What happens if someone takes the money raised for charity and spends it on a new car? Or consider maybe a less fraudulent, more awkward scenario: You and your friends are pooling money for a trip. You discover that they all have a secret group chat set up to make fun of you. Needless to say, you want to pull your cash (and your loyalty, too).

Braid is starting by helping friends, not strangers, pool money together — a focus that has maybe saved them from some of these tensions.

“We’re processing at this point, like seven figures a month in payment volume and it is not as much of a problem as I thought because I think the social consequences of taking money that’s not yours is so dire,” she said. “You can take all the money, but you will lose all your friends.”

Still, the founder noted that bad actors could become more of an issue as the company scales. Shared money creates myriad challenges: regulatory constraints, technical dynamics of how to move money, and, of course, aforementioned consumer behavior. Braid, in anticipation, has set up specific features to address some concerns, such as creating options to limit individual contributor spending limits, access to a debit card, and visualization of spending history for everyone to see.

This nuance is why she thinks companies like Venmo and others can’t afford to do social fintech as a bolt-on. “I’m not interested in a super app; I’m not interested in becoming a top-of-wallet primary card right? We want to serve these use cases of people who need to do stuff with money together.”

While Venmo may not start building a group financing app, the idea of decentralized and community-owned power has grown thanks to crypto. It’s also been checked: A decentralized autonomous organization, or DAO, raised millions of dollars — and then a bug allowed a thief steal $50 million in virtual currency.

Peyton thinks that crypto mania is still largely good news for Braid, even though the fintech doesn’t put itself in the web3 category.

Amira Yahyaoui wants Mos to be a ‘radical’ fintech startup

“I’m so thrilled honestly that there is such a kind of mindshare getting dedicated toward how can we help people do more in groups, and in the most general sense, how can we make interacting and collaborating easier and more powerful?” she said. In the future, Braid wants users to be able to fund their pools with any type of capital. For now, Peyton doesn’t see any benefit in branding Braid as a web3 company.

“I don’t know if this is a controversial viewpoint or not but DAOs are everywhere, right? A firehouse, a DIY co-working space, a studio,” she said. “I don’t want to say traditional, although that’s what maybe they would call me, but I think that the mainstream consumer opportunities in payments are enormous.”

Notably, the company was first co-founded between Peyton and product engineer Todd Berman, who left in 2020 to join a marketing and advertising platform. That same year, Braid raised its first and only formal funding round to date, a $9 million seed round from investors including Index and Accel.

Join the tens of thousands of people who subscribe to Startups Weekly. Sign up here to get it in your inbox.