Apple may be changing how iOS subscriptions operate when price increases are involved. Recently, some developers noticed that the streaming service Disney+ was seemingly only informing users of upcoming price changes then automatically opting them in. This is different from how subscription price increases would typically be handled. In most other cases, a customer is presented with options to either agree to the new, higher price or visit the subscriptions management page to cancel the service. If customers ignore this warning without clicking the “agree” button, the subscription is automatically canceled on their behalf.

The discrepancy with how Disney+ was operating was recently discovered by developer Max Seelemann, who claimed to have received a notification about the streamer’s price increase that only offered a large “OK” button, with fine print that informed users if they wanted to cancel, they could click a link to review their subscription. There was some question as to whether this was a so-called “dark pattern” that essentially tricked users into agreeing to the price agree by clicking “OK,” or if Disney would actually auto-charge users the new, higher price even if “OK” wasn’t even pressed.

Seeleman believed it to be the latter because he had also received an email from Apple essentially informing him the pricing would soon change, and he would be opted in at the higher rate. While the original email was in German, he translated it as saying: “your subscription will be available from March 19 at the price of €8.99 per month until canceled.” The €8.99 was the new, higher rate.

iOS biz people… Subscription price increase as mere NOTICE instead of having to confirm, else subs expires.

Is this new behavior for everyone or exclusive to Disney+? pic.twitter.com/zt7c15QcTA

As the news circulated on Twitter, several other people responded that they, too, had noticed similar issues with pricing increases for their streaming subscriptions. Instead of having to opt in and agree to the price change, as usual, the new system required them to opt out if they didn’t want to pay the higher price.

Disney has tweaked prices for its streaming service over the past year, including a $1 increase for Disney+ announced in March 2021 in the U.S. The service then went from $6.99 per month to $7.99 per month, or from $69.99 to $79.99 for users on an annual subscription. Other international markets saw similar, smaller increases at different times.

While $1 is not a large or upsetting change, the concern is that unscrupulous developers could potentially use such a feature to raise prices by much higher amounts without users directly agreeing to the new charges.

It seems this change has largely flown under the radar because it’s not fully rolled out at this time — and because users likely don’t pay attention to small increases or emailed receipts from Apple.

David Barnard, an iOS developer and now developer advocate for subscription management startup RevenueCat, decided to test this change with help from a friend to see the new “automatic opt-in” system was available to all developers. But their tests indicated that when developers raised subscription prices, users were still presented with a screen that asks them to click a button to “Agree to New Price,” as is standard, he told TechCrunch. Another option allows users to “Manage Subscription,” which would take them to a screen where they could cancel, also as usual. (See below).

They did not have the ability to automatically opt in users to the price changes. 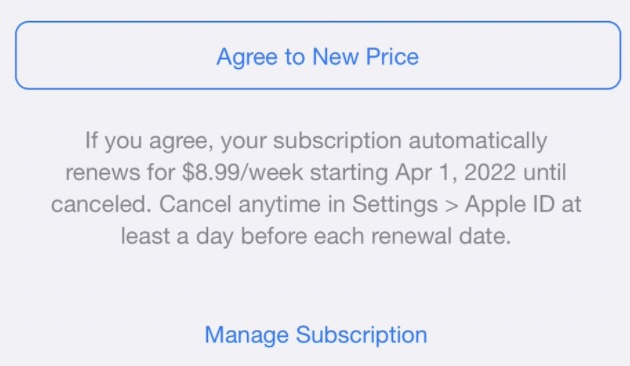 Image Credits: Screenshot from the test showing the standard experience

This appeared to be proof that Disney+ had a special agreement with Apple to operate differently when it came to price increases.

TechCrunch reached out to Apple to ask why Disney+ had a different system that was out of compliance with how in-app purchases should operate, per Apple’s own documentation.

An Apple spokesperson did not dispute the accuracy of the developers’ claims we presented and said this was part of a pilot test.

“We are piloting a new commerce feature we plan to launch very soon. The pilot includes developers across various app categories, organization sizes and regions to help test an upcoming enhancement that we believe will be great for both developers and users, and we’ll have more details to share in the coming weeks,” the spokesperson said.

This, of course, raises a number of questions — like how apps will qualify to use this commerce feature, who’s already in the pilot test group (raising their prices, perhaps unbeknownst to users), whether this has anything to do with the recent changes to “reader” apps and their ability to include external links, how Apple would police such a feature to ensure it was not used by bad actors and much more.

Apple declined to share more details beyond its statement.

That link describes how it works for everyone else, the user have to accept the new price or the subscription terminates. With Disney, the subscription will auto-renew at the higher price if the user doesn’t take action.

This situation also toes the line with regard to how some developers seem to receive special treatment. Despite Apple’s claims that its App Store is an even playing field where all developers play by the same rules, history has proven that this is not always the case — like when the House Antitrust Subcommittee discovered that Apple and Amazon had negotiated on a special deal for Amazon’s Prime Video app, or when Apple revealed how some developers had been allowed to participate in a program where they could offer in-app video rentals without paying commissions.

Of course, a pilot test isn’t the same thing as a behind-the-scenes corporate deal. But it’s unclear how long these “testers” have had the advantage of raising prices without the threat of automatic cancellations and how long this test will continue before other developers receive the same benefit.

The news of the pilot arrives at a time when Apple’s commission structure is under attack from lawmakers and regulators in global markets. Apple has already reduced commissions for smaller developers and news apps who agree to participate in Apple News. And it’s had to offer developers in South Korea and the Netherlands the option to use third-party payments due to new government requirements. Over time, as more laws like this roll out, Apple could become concerned over commission losses. The new program — which no longer automatically cancels subscriptions when users don’t agree to price changes — could help to shore up App Store revenue from further drops.