Apple CEO Tim Cook defended the company’s App Store commission structure in his sworn testimony before the House Antitrust Subcommittee on Wednesday. He claimed the majority of the apps pay no commission at all, with others paying either 15 or 30%, based on the specifics of their particular situation. He said developers were all treated equally and that Apple wouldn’t raise commissions, because it had to compete for developer interest in its platform as well.

But the documents shared by the House subcommittee as part of their investigation indicate that exceptions to Apple’s rules have been made — notably, with Amazon’s Prime Video app. In addition, Apple may have never raised commissions, but discussions weren’t off the table. It had once even considered raising commissions to 40% in particular situations.

The lawmakers had come to the hearing armed with internal Apple emails and interviews from App Store developers who argued that Apple doesn’t uniformly enforce its rules, and plays favorites. But their questioning of Cook over App Store fees, combined with a format that limited execs’ ability to respond at length, initially seemed to reveal little in terms of new information about Apple’s practices.

For instance, when asked directly about how the App Store worked, Cook simply restated the store’s published rules — that is, for app developers who have to pay commissions, they pay only 15 or 30%. The current guidelines require 30% for apps selling digital goods or services, with a drop to 15% in year two for subscription apps. The rules also document a carve-out for “reader” apps like audiobook apps, streaming services, news publications and other competitive products that have the option of forgoing in-app purchases. 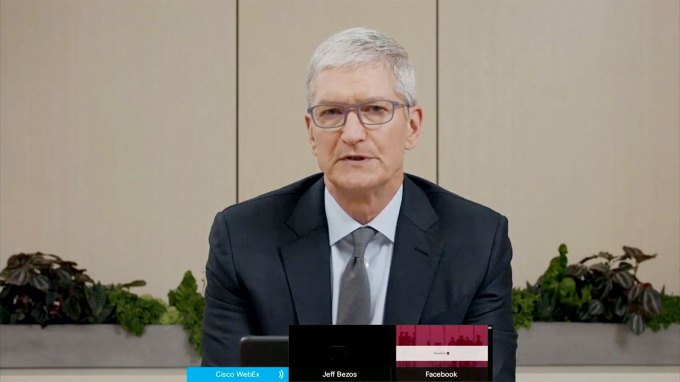 Cook also squeezed in a mention about how the vast majority of App Store apps, 84%, pay nothing to Apple in commissions. It’s the remaining 16% that pay, he noted.

And when asked if Apple was the sole gatekeeper as to what gets published on the App Store, Cook agreed that it was — given that the App Store was a “feature of the iPhone, much like the Camera and the chip is.” He clarified that Apple’s control over apps only extended to native software applications, not web apps, but denied Apple treated developers unfairly.

“We treat every developer the same. We have open and transparent rules,” Cook said, in his testimony. “It’s a rigorous process, because we care so deeply about privacy and security and quality. We do look at every app before it goes on,” he added.

But emails in 2016 between Apple SVP Eddy Cue and Amazon CEO Jeff Bezos, shared here on the House Judiciary Committee’s website, indicate that Apple, in fact, appears to have negotiated a special deal with Amazon over its Amazon Prime Video app for iOS and Apple TV. In an email dated November 2016 — before the 2017 launch of the Prime Video tvOS app — Apple agreed to take only a 15% revenue share for customers that signed up in the app using Apple’s payment mechanism. (Typically, subscription apps don’t drop from 30% to 15% until year two.)

Apple this April confirmed it had a special program for Prime Video and a small handful of other apps, which were subscription video entertainment providers. The program allowed those companies to rent or sell movies and TV shows to customers using the payment methods the companies already had on file, as well as more deeply integrate with Siri. But Apple hadn’t said that this special program would include a reduced commission on subscriptions or any other in-app upsells, as these emails confirm were points of discussion.

This wouldn’t be the first time Apple saw its commission structure as having some room to flex.

But in internal emails from 2011, Apple did discuss raising commissions — all the way to 40% for the first year of recurring subscriptions. “I think we may be leaving money on the table if we just asked for about 30% of the first year of sub,” Cue had written at the time.

Documents from the Hearing on “Online Platforms and Market Power: Examining the Dominance of Amazon, Apple, Facebook and Google” pic.twitter.com/42o2Ye13jI

Of course, Apple didn’t go so far as to actually make that change in the years that passed. But these emails indicate there’s more to Apple’s thinking — and its discussions around the commission structure — than the even playing field Cook testified to.