Sequoia has over the years made a name for itself for its early-stage bets on younger companies, many of which (Apple, Klarna and WhatsApp, to name a few) have gone on to become tech giants.

Now, as competition heats up among investors to work with the most promising startups earlier, and the field of the founders hoping to build and launch companies gets wider and wider, the firm is taking a new approach. Today, it is launching a new program called Arc, which it describes as a catalyst (not an accelerator, nor an incubator) that will seek out and then work with cohorts of about 15 startups in eight-week sessions, with the emphasis on “outlier” founders and startups from across Europe and the U.S.

Startups will get an upfront investment of $1 million from Sequoia; mentoring on company design from partners and operators affiliated with the firm (including founders and other key people from companies that it has backed); and a field trip to a legendary company to see it all in action. Sequoia has not yet disclosed which operators will work with the first cohort but said that the first on-site visit will be to Klarna, where startups will spend time with CEO Sebastian Siemiatkowski, CXO Camilla Giesecke, CMO David Sandstrom and CPO David Fock.

Those interested can apply from today until April 8, and the program will start May 23. Arc’s first cohort will be run out of London: one week in Sequoia’s offices in the city, then five weeks of working remotely wherever the startup is normally based, one week of working with another startup on-site, and then finally one week in Sequoia’s head office in Menlo Park, California. (Subsequent cohorts will do the same but start with the first week in Silicon Valley.)

Arc will be co-run by Jess Lee (below, left), a Sequoia partner and its chief product officer based out of the firm’s Silicon Valley office, and Luciana Lixandru (right), a partner based out of its London office. Key to it will be its unique selling point (apart from opening the door to working with one of the top VCs in the world): its emphasis on finding “outlier” founders. 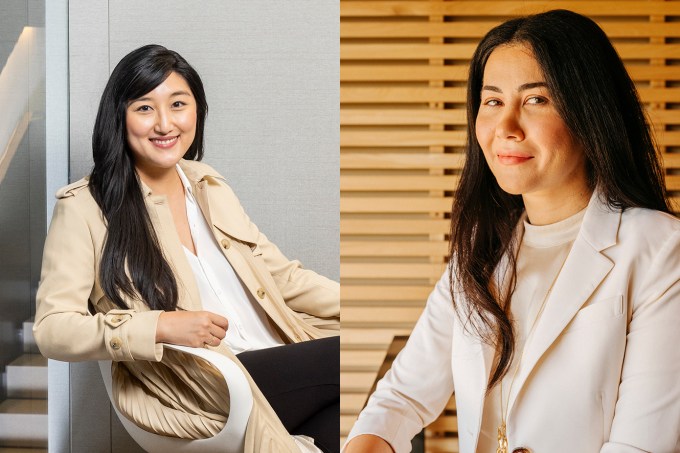 As Lixandru describes it, Sequoia will source candidates for Arc through an open process. Warm introductions are not factored in, and anyone can apply to be evaluated, screened, and accepted or rejected on equal terms, in part using the data science that Sequoia’s product team (led by Lee) has built internally to evaluate potential investments.

The idea here is that, while the tech world has some tried-and-tested corridors to feed the tech and startup ecosystem — Silicon Valley, certain universities, and previously holding an important role at another successful tech company being three of the most stereotypical and leaned-on of these — the growth and increasing decentralization of that ecosystem, accelerated by the last two years of everyone working remotely due to the COVID-19 pandemic, is creating new opportunities to find talent, and for talent, wherever it may be located, to take the step from concept to building a company around it.

Sequoia — which only established its first official outpost in Europe, in London, in 2020 — thinks that while all early startups can benefit from evidence-based guidance and mentoring from Sequoia (we know what works, is the basic thought process), there is a prime opportunity to do this in a more concerted and programmatic way for founders from less mature ecosystems.

“I really do think that having open applications will benefit European founders even more,” said Lixandru, who has made her name over the years by tapping into less likely regions (such as her home country of Romania) to identify and back companies, like UiPath, that have gone on to booming futures. “Europe is so fragmented. So many founders that I’ve been privileged enough to work with started in nontypical technology hubs.”

On a more practical note, though, launching Arc is also an important competitive measure — given what other firms are doing. SoftBank is also making some proactive movements to get in closer with earlier-stage, younger startups, such as with its own accelerator effort, Emerge, which it’s running in partnership with Speedinvest. Tiger Global made its name by writing big checks for later-stage businesses, but now it is increasingly also not only looking for earlier-stage investments, but doing a lot more now in Europe. Andreessen Horowitz is also taking a more active role in making early investments in the region.

Some of the logic of open applications is to tap more effectively into the long tail of founders, who might not already know someone or tick enough of the right boxes on their resumes, and that will hopefully bring a more diverse mix of people to the table overall. That has been a mantra in the tech world for some time, but often feels more like lip service, so the more programs that are built around the concept, the better.

However, it seems there will still be some lines drawn in that process. Lixandru initially told me that Sequoia would also be evaluating founders from Russia as part of the mix — which would be an interesting twist, given how so many companies, including VCs, are currently distancing themselves from the country due to the war in Ukraine, Russia’s unprovoked attacks, and the subsequent waves of global sanctions and moral outcry against it.

“We are going to accept applications from everywhere in Europe, including Russia,” she said. “We think that great founders come from everywhere [and] we want to give these opportunities to founders everywhere.” Lixandru’s portfolio includes leading the Series A for white-boarding and visual collaboration startup Miro (before she moved to Sequoia). Originally founded in Russia, and now HQ’d in San Francisco and Amsterdam, it raised $400 million in January and is now valued at over $17 billion.

Sequoia later clarified to me that while it might back Russian founders in Arc, they are only considering those who are based outside of the country.

“Company design,” meanwhile, is a concept and approach that Sequoia has been honing for quite some time, with modules that it has built both for later-stage and others for early-stage startups covering concepts that range from the tangible (say, how to build a sales team as you scale) to the slightly less tangible (for example, building company culture).

With Arc, that content will be put to work in a new way, specifically to train founders who are just starting to find their feet.

In an industry that has a very high fail rate, it’s unsurprising that the word that Sequoia people return to when describing what they’re trying to do here is “enduring,” with Sequoia being a track-record-proven custodian of some of the skills needed to become that kind of company.

“Company design is more than just company building,” Lee said in the interview I had with her and Lixandru. “Company design is the Sequoia way to start, build and scale an enduring company. … It’s the outlier mindset of really thinking like about that scale of ambition of actually building for potentially a decade or more. And then that community, this acquired community, [it is] just really powerful to be able to tap into that hive mind and that brain trust.”