Russia is seeing an exodus of entrepreneurs, computer programmers and other educated middle-class citizens as Western sanctions and political instability make it impossible to run an international business in the country.

Russia’s invasion of Ukraine has forced millions to flee their homes, fearing for their lives. But the war is also leading to Russians moving from their home country. I spoke to a number of Russian entrepreneurs and venture capitalists who shared why they have left or are in the process of leaving their homeland. But as they try to start anew abroad, anti-Russia sentiment and economic sanctions are set to haunt them.

As Russia continued to amass troops at the Ukrainian border in mid-February, Eugene Konash, who had staff in Russia working remotely for his London-based gaming studio Dc1ab, became increasingly worried. But like many others, he didn’t expect a full-scale invasion.

His hopes of tensions fading soon evaporated. When it became clear Russia was waging a full-on war on Ukraine, Western countries began slapping sanctions on Russia. Businesses felt the impact right away.

One of Konash’s employees found their bank hit by sanctions, blocking international transfers to his account. As the ruble collapsed, long queues formed outside banks in Russia as citizens scrambled to convert their savings into dollars — only to find hefty fees and the government restricting access to foreign currency.

The tipping point for Konash came when investors told him in no uncertain terms that his startup would be uninvestable if it continued to have such a heavy presence in Russia. His Russia-based team agreed it was time to leave.

“The guys that even a month ago said they wouldn’t leave Russia under any circumstances were talking about grabbing their things and literally driving to Kazakhstan to cross the land border because the tickets to get out were either sold out or were super expensive,” said Konash.

Like many tech firms with an international footprint, Konash’s gaming startup hires developers across Eastern Europe for the region’s affordable and quality programmers. Originally from Belarus, Konash knows well that the former Soviet bloc nations’ emphasis on science and math education has helped a world-class engineering and scientific workforce to flourish.

Financial sanctions aside, it became impractical to operate an information technology company from Russia as foreign tech services are either banned or begin to retreat.

Google and Microsoft have suspended all sales in the country, while Russia has attempted to block Facebook, Instagram, and Twitter, albeit with mixed results. Some users could still access these American platforms following the bans, suggesting that Russia may be some way away from having a robust censorship machine like that of China. Facebook and Twitter said they were working to restore services in Russia.

“Who knows when development tools like Unity may be blocked?” said a Siberia-born gaming investor who left the country following the 2015 Crimea annexation and subsequent economic sanctions by the West. “No one wants to end up in a country with no access to the outside world.”

The investor declined to be named, fearing the Russian government’s crackdown on dissenters.

After the invasion of Crimea seven years ago, many Russian-built companies began to incorporate elsewhere in a bid to placate investors with qualms over the political risks and optics associated with backing Russian companies. Before, many of these firms were operating outside the country merely on paper, with their teams often entirely still based in Russia. But the full-scale invasion of Ukraine has turned a trickle into a flow.

“After 2015, companies were drifting out of Russia legally,” observed an investor at a venture capital firm that recently moved its Moscow team out of the country. Even before the Ukraine crisis, the firm would only back a Russia-based startup if it was incorporated outside the country and had an international focus.

“Physically, these startups would still be based in Russia. They’d conduct R&D there because the cost of living was low,” said the investor, who asked for anonymity because the topic is “highly sensitive” for the firm, which has been trying to distance itself from Russia.

Life as a startup incorporated overseas but operating for all intents and purposes in Moscow itself sounded pretty breezy up until recently, said Nikita Blanc, who four years ago changed his last name from Akimov. His company Heyeveryone, which is building a tool to automate investor relations management, is in the process of incorporating in Delaware. 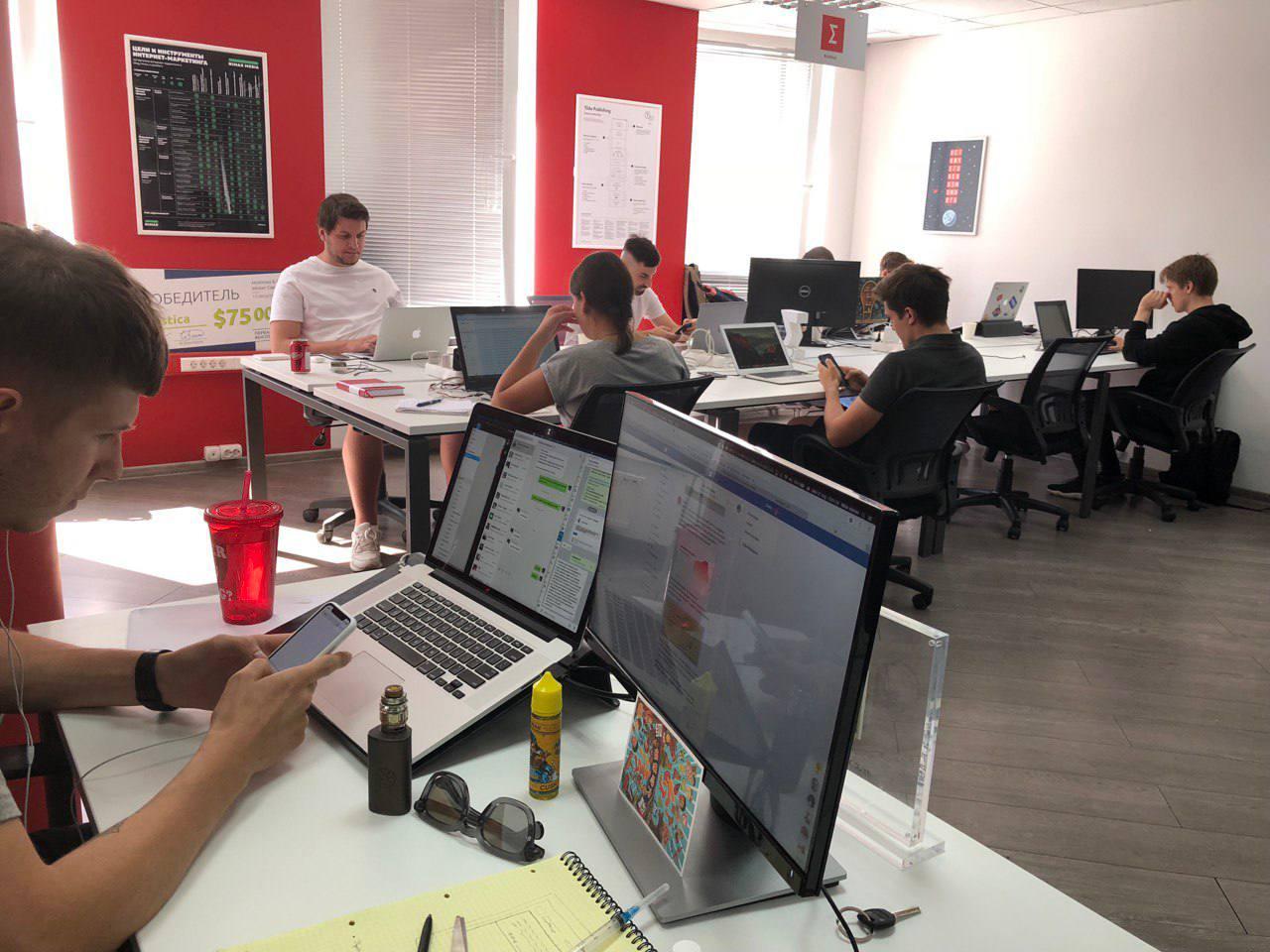 The startup never intended to serve the Russian market alone, but Blanc and his wife picked Moscow as a base for the obvious perks: their parents could help take care of their 3-year-old daughter; the country’s internet was speedy, cheap, and free at the time; and Moscow was teeming with tech meetups where Blanc found like-minded founders.

The Blancs’ entrepreneurial life enjoying the best of both worlds ended abruptly with Russia’s attack on Ukraine. Three days into the invasion, Nikita’s wife Valentina was lying in bed, devastated from seeing her country fall apart. She decided it was time to leave.

“I couldn’t do anything at work. Part of my family is from Ukraine,” she said. “It would be hard to leave with a child, but I didn’t think the situation would change. So we each packed 23 kilos of luggage and bought a one-way ticket.”

The couple moved with their young daughter to Georgia, one of the top destinations for Russia’s current talent outflow. It is a popular choice of country, along with Turkey, Armenia, Kazakhstan and Thailand, which are relatively affordable and easy to enter for Russians.

The venture fund that recently left Moscow has been extracting hundreds of Russian citizens, mostly its own staff and portfolio companies, out of the country in the past few weeks. Across the internet, Telegram groups with tens of thousands of Russians discussing exit plans and helping each other out have mushroomed.

‘We Russians are fucked’

The would-be émigrés have to make escape plans on the fly as sanctions against Russia intensify on a daily basis: Which countries are still taking Russian flights, and how will they move money around?

Sanctions continue to impact Russians after they have fled abroad, even those who left long ago. Notable financial infrastructure providers like PayPal, Mastercard and Visa have already suspended operations in Russia, which means expatriates using Russian banks are not able to use their cards overseas. Estonia recently suspended e-residency applications from Russian and Belarusian citizens to “prevent sanctions evasion and possible illegal activities.” European Union regulators have reportedly told some banks to scrutinize transactions by all Russian clients, including EU residents.

The breadth of this wave of sanctions is prompting some to let go of their Russian passports. The Siberia-born gaming investor is seeking Singaporean citizenship, fearing that their Russian nationality might cut them off from the U.S. dollar-based financial system.

“Ukrainians are accepted as refugees around the world, but we Russians are fucked,” the investor lamented.

Others are betting that cryptocurrency can help them circumvent sanctions, such as the Blancs, who put a large chunk of their assets into crypto five years ago. Konash, the gaming entrepreneur, expected Bitcoin and Ethereum to be the last resort for cross-border payments if his staff get stuck in Russia for any longer.

While major exchanges like Binance and Coinbase have stopped short at imposing blanket bans on all Russians, they have abided by sanctions to block target individuals. Binance’s CEO maintained that crypto is not a likely escape route because transactions are recorded on publicly available ledgers, and hence easy for governments to trace.

But EU regulators continue to argue that sanctions imposed on Russia and Belarus extend to all crypto assets, and U.S. lawmakers have urged the Treasury to ensure Russia cannot use crypto to evade sanctions.

‘Calm is the new currency’

Those who leave Russia face the obvious difficulty of being away from family and friends staying behind, but even greater anguish comes from the difference in their perception of recent events.

“Our parents and older relatives keep telling us to go back, saying, ‘Everything is OK here. Russia is great,'” Blanc said with an incredulous but sad note.

These educated, freedom-seeking Russian tech workers won’t likely look back. The Russians I spoke to, who are either leaving the country or helping others escape, were surprisingly calm as they recounted the woes of their country, in part because they have been mentally prepared for the inevitable farewell.

“Our investor SOSV taught us to be like cockroaches, be flexible and adapt to new environments as entrepreneurs. This philosophy is now helping us go through these uncertain times,” said Valentina Blanc. “Calm is the new currency.”

Émigrés like the Blancs might well be the last wave of Russia’s chronic brain drain, stretching back decades.

“The thing that gets me is that if you look at all the fantastic engineering and scientific talent that was produced in the Soviet Union and Russia — most of it has been leaving the USSR world at every opportunity,” said Konash.

“Who does that leave in the post-USSR world? For me, this last wave of the brain drain is the death knell of the education and cultural scientific tradition that is probably one the few positive things to come out of the Soviet Union.”