The Joe Rogan controversy has been a PR headache for Spotify in recent days, but it doesn’t seem to have yet prompted a sizable exit to rival streaming apps, according to new app store data.

Over the past several days, Neil Young, Joni Mitchell and other musicians have pulled their music from Spotify to protest the streamer’s relationship with controversial podcaster Joe Rogan, who’s accused of using his platform to spread COVID-19 and vaccine misinformation to his millions of fans. The musicians’ protests came shortly after an open letter signed by hundreds of doctors, scientists, health experts and professionals pleaded with the streamer to establish a clear public policy to moderate misinformation on its service.

The letter accused Spotify of helping damage public trust in scientific research and sow doubt in the guidance provided by medical professionals amid a pandemic where misinformation can have “extraordinarily dangerous ramifications,” it said.

Following the outcry and music removals, both Spotify and Rogan addressed the controversy — the former with promises to add content advisories to podcasts discussing COVID-19, and the latter with a commitment to better balance out controversial conversations by including experts with different opinions on the show.

As the news of the musicians’ protest spread, so did what appeared to be a Spotify consumer boycott. Hashtags like #cancelspotify, #deletespotify and #ByeSpotify (or #ByeByeSpotify) gained traction on Twitter. There were reports that Spotify’s customer service channels became so overwhelmed with complaints and cancellation requests that they had to shut down live support. USA Today and other outlets published how-to guides for those attempting to cancel their Spotify accounts. And yesterday, The New York Times declared “Spotify’s Joe Rogan Problem Isn’t Going Away.”

However, according to app store data, the controversy has not led to a large exodus of Spotify subscribers — the app is still seeing millions of weekly downloads, a much larger figure than its nearest rivals, even during Spotify’s PR nightmare starting last week.

Joe Rogan, economics, and why capitalism is making people blame the CCP

App store intelligence firm Sensor Tower examined the market trends resulting from the Joe Rogan backlash and found there was “no meaningful change” to either average session count or duration metrics for Spotify following the incident. (It doesn’t publicly share Spotify’s actual metrics; its data, in this case, isn’t modeled, but rather based on a sample of all active Spotify app installs.)

Meanwhile, it seems Spotify’s rival streaming services only marginally benefited from the Rogan controversy, in terms of gaining new installs and users. Sensor Tower told TechCrunch there was only a “slight uptick” in the adoption of Spotify’s competitors when comparing the past two weeks — before and after the controversy — and the changes in installs looked “fairly nominal” across the board. 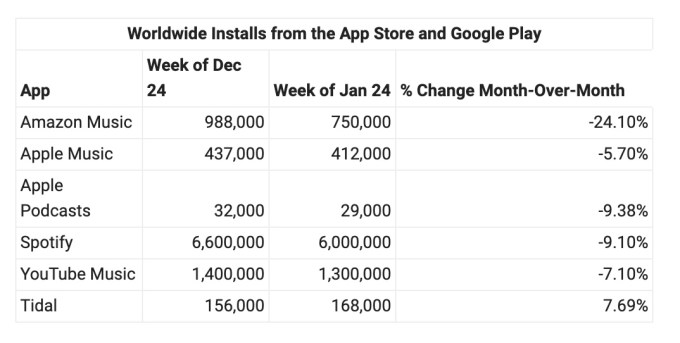 There is a big caveat to this data, of course: If Spotify users defected to Apple Music, we wouldn’t necessarily see this as new installs. Though now listed independently on the App Store, the Apple Music app comes pre-installed on Apple devices, so users would not have to seek out the app unless they had previously deleted it from their iPhone.

But there’s another way to slice the data — by looking beyond music streaming apps to examine top apps dedicated to serving podcasts. While Spotify offers music and podcasts in one app, many other companies — like Apple — break apart different types of audio into separate offerings. In other words, if a lot of Spotify users were leaving the service as a result of a boycott, you’d expect to see top podcast streaming apps making gains. But that wasn’t even close to being true, in many cases.

Pandora, Amazon Music and iHeart all advertise that they provide both music and podcasts, but they haven’t changed their rankings significantly among the top 10 music apps on the U.S. App Store over the last two weeks, the firm told TechCrunch. And the week-over-week changes in downloads for the others, again, were “fairly nominal.”

While it’s true that the data may still be too early, given that more musicians are now getting in on the boycott, the impacts to Spotify’s business as measured by key mobile metrics, like sessions and download growth, are minimal so far.

That doesn’t mean the company isn’t suffering, to be clear. It did seem to be slowing its ability to pick up new users, which could be a worsening trend if the backlash continues. It’s also now stuck in a news cycle in which every new musician to take a stand will bring one more negative headline. It has to deal with Apple’s trolling, as the Apple Music app welcomes Neil Young and Joni Mitchell fans with featured placements. And there’s still a risk that stars who appeal more to Spotify’s younger audience could decide to boycott the service, too, which would have a larger impact on its business.

More broadly, the backlash has pushed Spotify into the same arena as companies like Facebook and Twitter, where it’s held responsible for the content it hosts. That’s a minefield that isn’t easily navigated. And, ironically, it’s a challenge Spotify invited when it started snapping up studios and podcast hosts, like Rogan, as exclusives to give itself a competitive advantage.