Musician Neil Young is following through on his threat to pull his extensive and well-loved sonic catalogue from Spotify. Young took a stand against the company’s relationship with podcaster Joe Rogan this week, accusing Spotify of propagating Covid-19 misinformation through Rogan’s hit show, which Spotify bought exclusive rights to in a deal reportedly worth at least $100 million.

Spotify confirmed Young’s actions in a statement emailed to TechCrunch Wednesday, saying that the company “regret[s] Neil’s decision to remove his music” from the streaming service:

“We want all the world’s music and audio content to be available to Spotify users. With that comes great responsibility in balancing both safety for listeners and freedom for creators. We have detailed content policies in place and we’ve removed over 20,000 podcast episodes related to COVID since the start of the pandemic. We regret Neil’s decision to remove his music from Spotify, but hope to welcome him back soon.”

In an update on his official website, Young explained the thinking behind the decision to pull his music. “I first learned of this problem by reading that 200 plus doctors had joined forces, taking on the dangerous life-threatening COVID falsehoods found in SPOTIFY programming,” he wrote, declining to mention Rogan’s show by name.

“… Most of the listeners hearing the unfactual, misleading and false COVID information on SPOTIFY are 24 years old, impressionable and easy to swing to the wrong side of the truth. These young people believe SPOTIFY would never present grossly unfactual information. They unfortunately are wrong. I knew I had to try to point that out.”

In the post, he notes that Spotify comprises 60 percent of his streaming income globally. “I sincerely hope that other artists and record companies will move off the SPOTIFY platform and stop supporting SPOTIFY’s deadly misinformation about COVID,” Young wrote, singing off “in the name of truth.”

The Wall Street Journal first reported that Spotify was “in the process” of removing Young’s music Wednesday. Spotify confirmed to TechCrunch that the removal is in progress and Young’s music would no longer appear on its service “soon.” At the time of writing, his albums and songs still appeared in Spotify’s search and curated playlists, though some songs gave an error that they were unplayable. 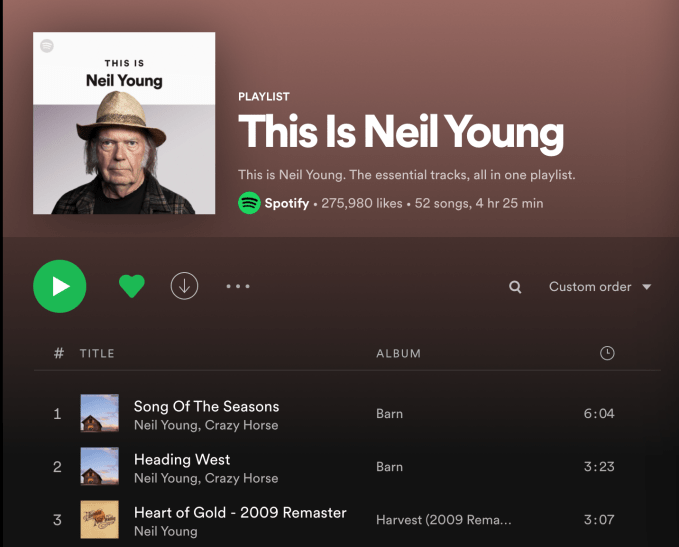 Young announced the intention to pull his music in a since-deleted open letter to his management team and label. “I am doing this because Spotify is spreading fake information about vaccines – potentially causing death to those who believe the disinformation being spread by them,” he wrote in a letter first reported by Rolling Stone. “Please act on this immediately today and keep me informed of the time schedule.”

This isn’t Young’s first time clashing with streaming services. Back in 2015, he threatened to remove his music from Spotify and other platforms over complaints that they reduced the quality of his recordings. At the time, he launched a streaming hardware device and accompanying music service called Pono designed specifically for high quality audio. In the new letter, he takes a detour to mention Spotify’s low streaming quality, calling it an “upside” for his fans that they can to find his extensive back catalogue elsewhere in higher quality.

“Soon my music will live on in a better place,” Young wrote, pointing fans toward Amazon and Apple Music.

This story is developing…