Twitter’s premium subscription service, Twitter Blue, is launching today in the U.S. as well as New Zealand, offering an expanded slate of features meant to appeal to Twitter’s most engaged users. The service will be available across iOS, Android and the web for $2.99 per month (or $4.49 NZD). Twitter Blue first arrived this summer in Canada and Australia, giving subscribers a set of tools to organize their bookmarks, read Twitter threads in a clutter-free format and quickly fix typos before tweets were posted, among other things. With the expanded rollout, Twitter Blue will also enable early access to new features via the recently launched Twitter Labs, and it will offer ad-free news articles from hundreds of publishers, thanks to Twitter’s springtime acquisition of Scroll.

And, as an added perk, Twitter is bringing back Scroll’s news aggregator Nuzzel as a new feature called “Top Articles.”

Nuzzel had a small but devoted user base, which had been disappointed to see Twitter had shuttered down their favorite service following its buyout of Nuzzel’s parent company, Scroll. The service had acted as a missing curation layer to Twitter’s tweets by showing users what people you were connected with on Twitter were reading about and sharing across the platform. This served as a more personalized way to tune into what was being discussed compared with just scrolling through Twitter’s trends. 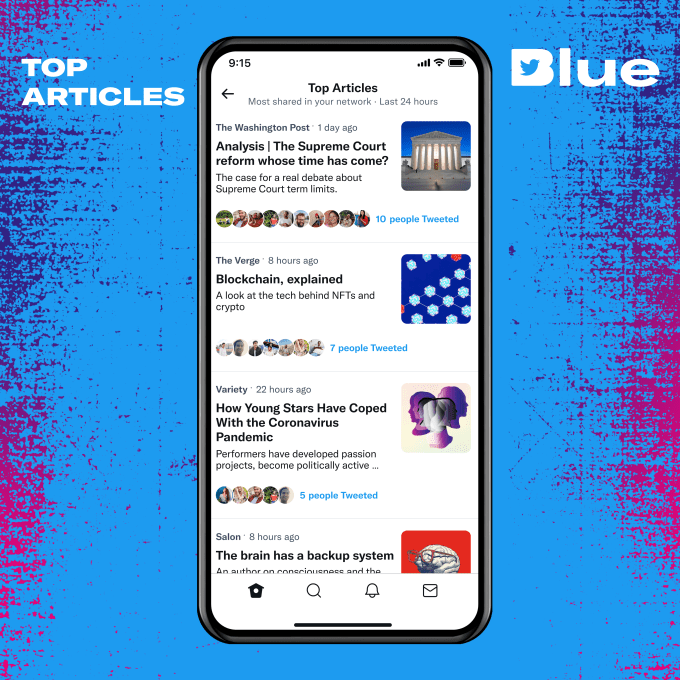 Today, Twitter says it will make this same feature available to Twitter Blue subscribers as Top Articles. The feature will allow users to see the most shared articles in their network over the past 24 hours.

The addition joins other now standard Twitter Blue offerings, including the ability to sort saved tweets (aka “Bookmarks”) into folders for easier access, the ability to customize Twitter’s theme, choose a custom app icon and view long Twitter threads in a cleaned-up, distraction-free reading experience with just a tap. And of course, Twitter Blue gives subscribers the closest thing you’ll get to Twitter’s most-requested feature — an “edit” button — with its alternative, an “Undo Tweet” button. This allows users to catch a typo and fix it before the tweet is fully posted, but not correct tweets that are already live. Twitter Blue also includes a few personalization features as well, including theming, custom icons and, now, the ability to customize the app’s bottom navigation tab with your own favorite Twitter destinations, like Twitter Spaces, Bookmarks, Top Articles, Lists, Monetization and others. This may make Twitter feel more personalized to you, but limits Twitter’s ability to place new features it may want to promote in key spots in the app going forward. Subscribers also gain access to Twitter Labs, which is where Twitter will roll out its early-stage experiments first. At launch, Twitter Labs offers longer, 10-minute video uploads from the web (instead of two minutes for non-subscribers), and the ability to pin favorite Direct Message (DM) conversations to the top of the inbox, both of which were previously announced. 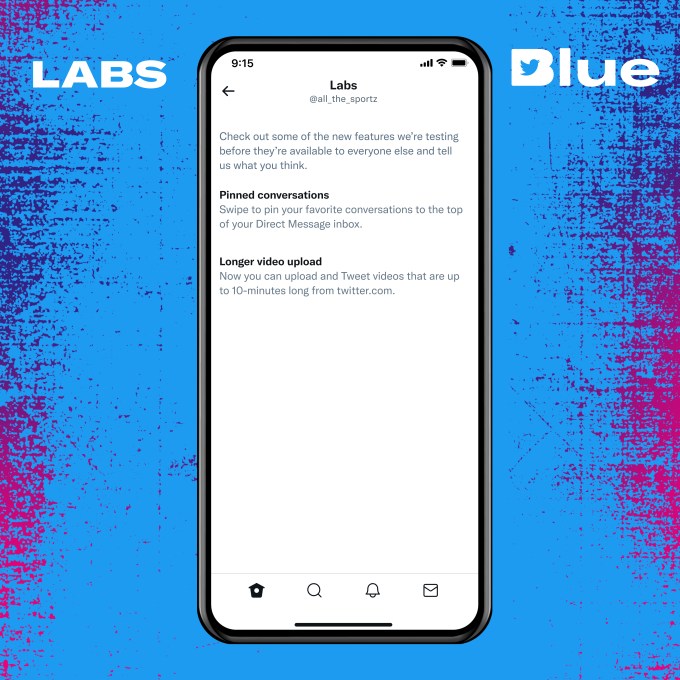 Another new feature is the ability to read news articles shared on Twitter without advertising and clutter. This feature is also enabled through Twitter’s acquisition of Scroll, and essentially works the same way as Scroll did. The company partnered with hundreds of publishers to offer a fast-loading, ad-free reading experience to Twitter Blue subscribers who click the links they come across on the platform. Among the notable names participating are The Washington Post, BuzzFeed and BuzzFeed News, Rolling Stone, Variety, Deadline, The Hollywood Reporter, IndieWire, Huffpost, The Atlantic, Insider, USA Today, MacRumors, BGR, Slate, Daily Beast, Miami Herald, Stylecaster, TV Line, Salon, Mother Jones, The Sacramento Bee, The Philadelphia Inquirer, SEJ and others.

When Twitter Blue members click news links to these sites, the publisher itself will serve the ad-free reading experience to the user — not Twitter. Currently, Twitter says it has 300 U.S.-based sites up and running on Twitter Blue, and “many more” will arrive in the future. Quick loading, clutter-free articles is a feature that other tech giants have offered, including Facebook with its Instant Articles and Google with AMP. But these earlier efforts have been controversial for locking publishers into the format, which could then dictate their visibility on the respective platform. They were also sometimes criticized for not delivering on their promises, like increased monetization, and for offering publishers limited user data.

Twitter, however, touts its news reading feature as a way for subscribers to support their favorite sites, as a portion of the Twitter Blue subscription will be paid out directly to the participating publishers. The app will display a chart that shows you which sites have received payments based on your own readership, and how much they’ve made.

The plan, says Twitter, is to make the micro-payments deliver more revenue than ads.

“Our goal is that each site makes 50% more per person than they were making serving ads to that person,” said Twitter Senior Director of Product Tony Haile, when introducing the feature. “At Twitter, we recognize that a great public conversation requires a thriving journalism ecosystem. So with Blue, we’re not just trying to enable a better internet for subscribers, but a better internet for journalism, too,” he added.

But these micro-payments may not go far enough in terms of replacing the potential monetization that comes from having readers visit a site directly, where they’ll encounter not only ads, but other promotions and initiatives a site has to offer — like subscriptions, free and paid newsletters, event tickets or whatever else the publisher may want to put in front of its audience. Twitter Blue readers may also not be able to recirculate through the site as web visitors do, decreasing overall engagement. Top Articles is initially live on Android and desktop at launch. Personalization features like app icons and themes are iOS only, as is custom navigation and pinned DM conversations. Support for longer video uploads from the web, obviously, is desktop-only.

With today’s launch, Twitter Blue is now available in the U.S., Canada, Australia and New Zealand. The company says it plans to offer the subscription in other markets, but couldn’t comment on those plans at this time.