Twitter this morning announced it’s acquiring Scroll, a subscription service that offers readers a better way to read through long-form content on the web, by removing ads and other website clutter that can slow down the experience. The service will become a part of Twitter’s larger plans to invest in subscriptions, the company says, and will later be offered as one of the premium features Twitter will provide to subscribers.

Premium subscribers will be able to use Scroll to easily read their articles from news outlets and from Twitter’s own newsletters product, Revue, another recent acquisition that’s already been integrated into Twitter’s service. When subscribers use Scroll through Twitter, a portion of their subscription revenue will go to support the publishers and the writers creating the content, explains Twitter in an announcement.

Scroll’s service today works across hundreds of sites, including The Atlantic, The Verge, USA Today, The Sacramento Bee, The Philadelphia Inquirer and The Daily Beast, among others. For readers, the experience of using Scroll is similar to that of a “reader view” — ads, trackers and other website junk is stripped so readers can focus on the content.

Scroll’s pitch to publishers has been that it can end up delivering cleaner content that can make them more money than advertising alone.

Deal terms were not disclosed, but Twitter will be bringing on the entire Scroll team, totaling 13 people.

For the time being, Scroll will pause new customer sign-ups so it can focus on integrating its product into Twitter’s subscriptions work and prepare for the expected growth. It will, however, continue to onboard new publishers who want to participate in Scroll’s network, following the deal’s closure.

And Scroll itself will be headed back into private beta as the team works to integrate the product into Twitter. 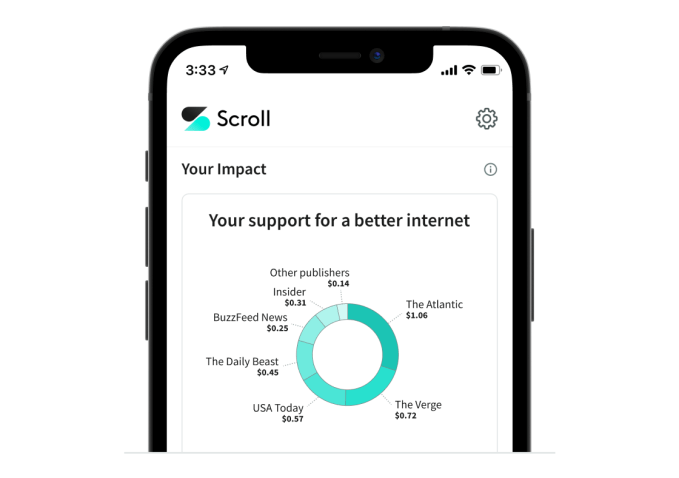 Twitter says it will also be winding down Scroll’s news aggregator product, Nuzzel, but will work to bring some of Nuzzel’s core elements to Twitter over time. Nuzzel’s blog post has more details, explaining that the product will need to be rebuilt in order to scale with Twitter.

“Twitter exists to serve the public conversation. Journalism is the mitochondria of that conversation. It initiates, energizes and informs. It converts and confounds perspectives. At its best it helps us stand in one another’s shoes and understand each other’s common humanity,” said Tony Haile, Scroll CEO, in the company’s post about Scroll’s acquisition.

“The mission we’ve been given by Jack and the Twitter team is simple: take the model and platform that Scroll has built and scale it so that everyone who uses Twitter has the opportunity to experience an internet without friction and frustration, a great gathering of people who love the news and pay to sustainably support it,” he added.

Twitter earlier this year detailed its plans to head into subscriptions as a way to diversify beyond ad revenue for its own business. The company unveiled what it’s calling “Super Follow,” a creator-focused subscription that would give paid subscribers access to an expanded array of perks, like exclusive content, subscriber-only newsletters, deals, badges, paywalled media and more. The company is aiming to use this new product to help it achieve its goal of doubling company revenue from $3.7 billion in 2020 to $7.5 billion or more in 2023, it said.

How this startup built and exited to Twitter in 1,219 days