A former upstart Instagram rival is suing Meta, formerly known as Facebook, over allegations that the company violated antitrust laws by cloning a competing product and ultimately killing its business.

The app, Phhhoto, launched in 2014, inviting users to create and share short GIF-like videos. If that sounds familiar, that’s because the same functionality was popularized in Boomerang, an app made by Instagram. That feature is now integrated into Instagram’s core app experience.

The newly filed lawsuit, embedded below, alleges that Facebook’s behavior violated antitrust laws by cutting off the app’s access to its social graph, slow-walking a proposed relationship and then eventually releasing its own copy of Phhhoto’s core feature: the seconds-long looping video.

Menlo Park-based lawyer Gary Reback will represent Phhhoto in the suit. Reback is best known for his involvement in setting the stage for the federal government’s successful antitrust case against Microsoft, which ultimately didn’t split up the tech giant but did force the company to open up some aspects of its computing business — consequences that continue to reverberate in the tech industry today.

Reback argues that Phhhoto’s experience underlines why it’s detrimental to the market when a massive tech company buys out its competition and starts running those businesses.

“The record here demonstrates that Facebook would have partnered with Phhhoto and launched to prominence this great new social network that would have competed with Instagram,” Reback said. He highlighted the unusually hands-on approach that Facebook’s top leadership took with the nascent competitor.

“On or about August 8, 2014, Zuckerberg downloaded and installed the app onto his phone, entered the phone number of his device into the Phhhoto app, created a personal account, and posted a profile picture of himself (reproduced below) to his new Phhhoto account,” the suit reads.

The suit includes receipts — namely, Zuckerberg’s own selfie, taken as he was testing the app. 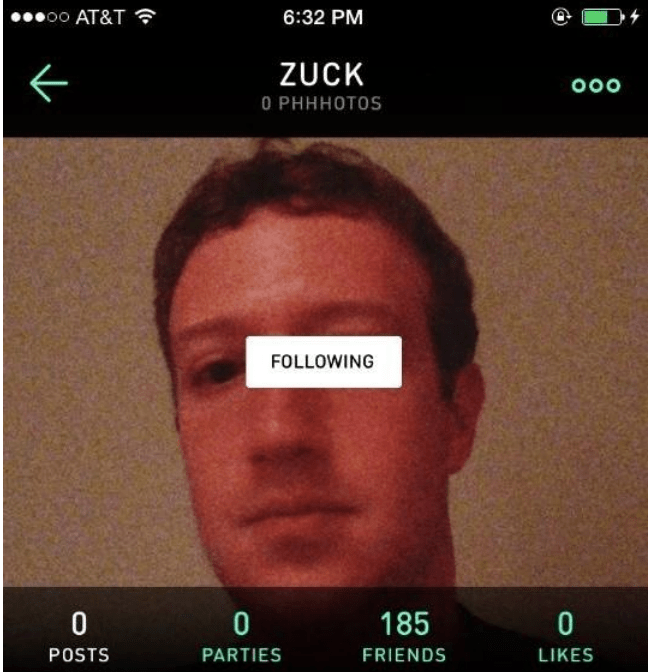 Instagram co-founder Kevin Systrom, who led Instagram at the time, also downloaded the app and explored its features. According to the lawsuit, Facebook began courting Phhhoto, offering partnership opportunities that it later reneged on:

… Hurren, then Facebook’s Strategic Partnerships Manager, reached out to Phhhoto, asserting that Phhhoto was “really awesome.” Hurren first offered to incorporate Phhhoto’s technology into the Facebook Messenger service. When Phhhoto declined, Hurren offered to incorporate Phhhoto’s content into Facebook’s users’ Newsfeeds. Phhhoto invested heavily in this project, but ultimately Hurren did not move forward, citing internal “legal conversations” that “hung” the project up.

After the relationship failed to materialize, the suit alleges that Facebook took a number of actions meant to drive it out of business, including removing pre-populated Instagram hashtags that indicate where content on the app originated. Instagram also cut Phhhoto off from its social graph, blocking the perceived competitor’s users from connecting with their Instagram friends in the app.

Phhhoto’s demise had some dramatic moments: On October 22, 2015, the same day the company was set to launch an Android version of its app, Instagram launched Boomerang. The suit identifies Boomerang product manager John Barnett as an “active Phhhoto user.” At the time of launch, TechCrunch noted that Boomerang appeared “suspiciously similar” to Phhhoto.

The suit alleges that Boomerang was the culmination of Facebook’s anticompetitive effort, effectively killing the smaller company with a copycat app that reproduced Phhhoto’s innovations “feature-by-feature.”

According to the suit, Phhhoto wasn’t even aware of the extent of Facebook’s aggressive behavior against other competitors at the time, learning more after the UK Parliament released a trove of the company’s internal documents in late 2018.

Phhhoto wasn’t afraid to speak out about Facebook’s moves as this all went down. “We watched Systrom and his product team quietly using Phhhoto almost a year before Boomerang was released,” Phhhoto co-founder Champ Bennett told TechCrunch in 2017.

After the app shut down, Bennett said that it “wasn’t a surprise at all” to see Instagram launch its own clone.

Phhhoto Is An Addictive, Albeit Poorly Named, Gif-Style Photo App