Spotify’s recently launched live audio app and Clubhouse rival, Spotify Greenroom, has a long road ahead of it if it wants to take on top social audio platforms like Clubhouse, Airtime, Spoon and others, not to mention those from top social networks like Twitter and Facebook. To date, the new Greenroom app has only been downloaded a total of 141,000 times on iOS, according to data from app intelligence firm Sensor Tower. This includes downloads from its earlier iteration Locker Room — an app Spotify acquired to make its move into live audio.

On Android, Google Play data indicates the app has been installed over 100,000 times, but Sensor Tower cannot yet confirm this figure.

For comparison, Clubhouse today has 30.2 million total installs, 18.7 million of which are on iOS, Sensor Tower says.

International apps like UAE’s Yalla and China’s Lizhi are massive, as well, with the former sporting 48.1 total installs, 3.8 million of which are on iOS. The latter has 29.5 million+ total installs, but only a handful on iOS. 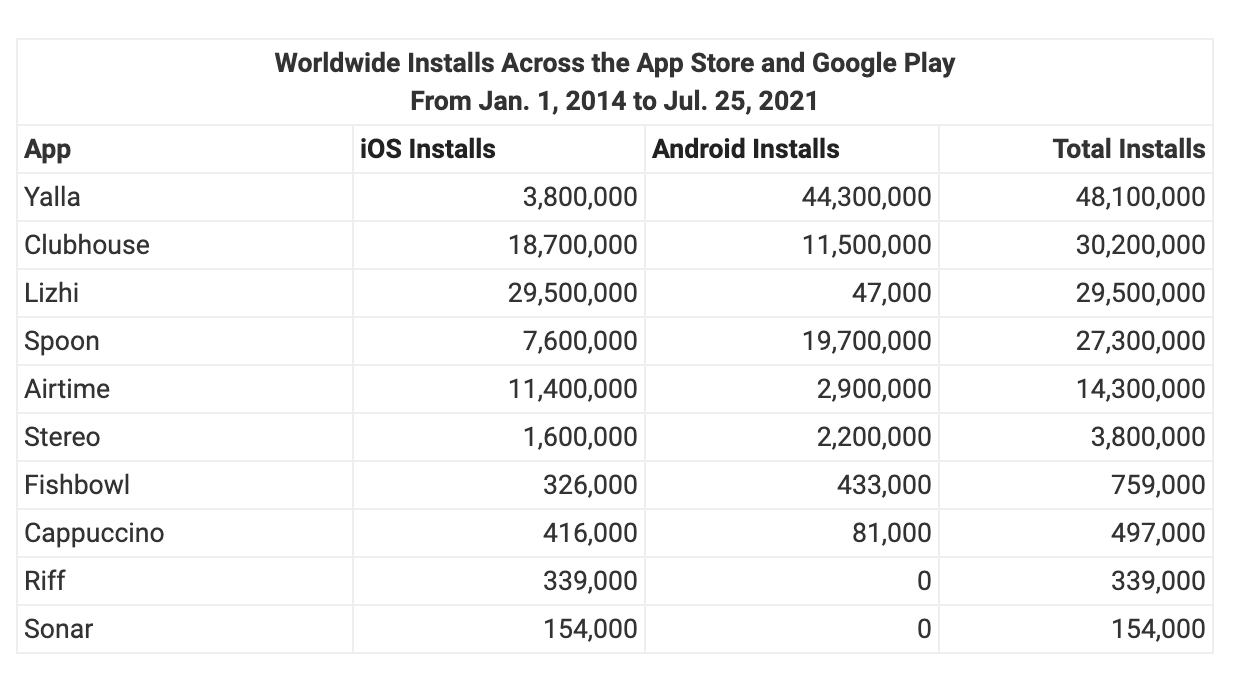 Spotify Greenroom’s launch last month, meanwhile, seems to have attracted only a small fraction of Spotify’s larger user base, which has now grown to 365 million monthly active users.

The majority of Greenroom’s installs — around 106,000 — took place after Greenroom’s official launch on July 16, 2021 through July 25, 2021, Sensor Tower says. Counting only its Greenroom installs, the app is ranked at No. 12 among social audio apps. It follows Tin Can, which gained 127,000 installs since launching in early March.

Because Greenroom took over Locker Room’s install base, some portion of Greenroom’s total iOS installs (141,000) included downloads that occurred when the app was still Locker Room. But that number is fairly small. Sensor Tower estimates Locker Room saw only around 35,000 total iOS installs to date. That includes the time frame of October 26, 2020 — the month when the sports chat app launched to the public — up until the day before Greenroom’s debut (July 15, 2021).

We should also point out that downloads are not the same thing as registered users and are far short of active users. Many people download a new app to try it, but then abandon it shortly after downloading it or never remember to open it at all.

That means the number of people actively using Greenroom at this time is likely much smaller than these figures indicate.

Spotify is getting into live audio because of course it is

While Sensor Tower looked at competition across social audio apps on the app stores, Spotify’s competition in the live audio market won’t be limited to standalone apps, of course.

Other large tech platforms have more recently integrated social audio into their apps, too, including Facebook (Live Audio Rooms), Twitter (Spaces), Discord (Stage Channels) and trading app Public. A comparison with Greenroom here is not possible, as these companies would have to disclose how many of their active users are engaging with live audio, and they have not yet done so.

Despite what may be a slower uptake, Greenroom shouldn’t be counted out yet. The app is brand-new and has time to catch up if all goes well. (And if the market for live audio, in general, continues to grow — even though the height of COVID lockdowns, which prompted all this live audio socializing in the first place, seems to have passed.)

Spotify’s success or failure with live audio will be particularly interesting to watch given the potential for the company to cross-promote live audio shows, events and artist-produced content through its flagship streaming music application. What sort of programming Greenroom may later include is still unknown, however.

Following Spotify’s acquisition of Locker Room maker Betty Labs, the company said it would roll out programmed content related to music, culture and entertainment, in addition to sports. It also launched a Creator Fund to help fuel the app with new content.

But so far, Spotify hasn’t given its users a huge incentive to visit Greenroom.

The company, during its Q2 2021 earnings, explained why. It said it first needed to get Greenroom stabilized for a “Spotify-sized audience,” which is why it only soft-launched the app in June. Going forward, Spotify says there will be “more tie-ins” with the main Spotify app, but didn’t offer any specifics.

“Obviously we’ll leverage our existing distribution on Spotify,” noted Spotify CEO Daniel Ek. “But this feels like a great way to learn, experiment and iterate much faster than if we had to wait for a full-on integration into the main app,” he added.