In the minutes before its quarterly earnings call this morning, Spotify played advertisements for its originals and exclusives, like the true crime show “Deathbed Confessions,” and the sex and relationships podcast “Call Her Daddy,” which Spotify recently acquired in a deal worth $60 million. Sure, it’s kind of hilarious to hear a recording of host Alex Cooper’s voice say, “Hey, daddy gang!” as investors log in to an 8 a.m. call, but the subtext rang clear: Spotify is serious about growing its podcast business.

Given how many podcasting companies Spotify has acquired over the past few years, it would be concerning if there hadn’t been significant growth in this realm. Among Spotify users who already listen to podcasts, podcast listening increased 30% year over year, with total hours consumed up 95%. Meanwhile, podcast ad revenue increased by 627%, which outperformed expectations. Spotify attributes this success to a triple-digit year-over-year gain at its in-house studios (The Ringer, Parcast, Spotify Studios and Gimlet) and exclusive deals with “The Joe Rogan Experience” and the Obamas’ Higher Ground studio. Spotify also referenced its November acquisition of Megaphone, a podcast hosting and ad company.

“The continued outperformance is currently limited only by the availability of our inventory, which is something we’re actively solving for,” said CEO Daniel Ek. “The days of our ad business accounting for less than 10% of our total revenue are behind us, and going forward, I expect ads to be a substantial part of our revenue mix.” 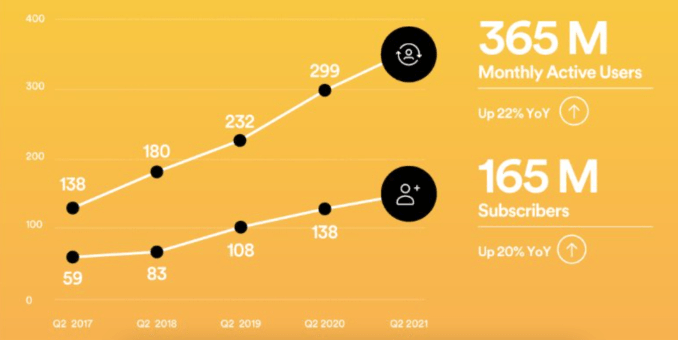 In April, Spotify launched paid podcast subscriptions — through Anchor, the podcast host that it bought in 2019, creators can choose to put certain content behind a paywall. Apple launched a similar feature, but it’s still too early to know how these subscription services will impact listeners and creators. However, Spotify did share a bit more information about its Audience Network, an audio ad marketplace. Since its rollout in April, Spotify’s “monetizable podcast inventory” tripled. Spotify has also seen a “meaningful” increase in unique advertisers and a “double-digit lift” in CPMs (cost per thousand ad impressions), but didn’t provide specific figures.

Still, the more power a platform like Spotify has over the podcasting industry, the fewer options creators will have for monetization — already, the ubiquity of streaming platforms has taken a toll on musicians, who are working together to demand better compensation from Spotify. The Justice at Spotify movement points out that on average, artists get $0.0038 per stream of a song, which means that a song needs to be streamed 263 times to make a single dollar. Spotify has continued to grow during the pandemic, but because live shows are musicians’ best way to make money in the age of streaming, artists have struggled while it’s unsafe to go on tour.

On this morning’s earnings call, Ek pointed to live performances as a potential way for musicians to increase revenue. In the past quarter, Spotify has tested live concerts as an income stream, partnering with artists like The Black Keys. Still, smaller artists might not trust the platform given its refusal to make streaming itself a more viable way to get paid for their work.

“Live is a meaningful thing for many of our creators, and it’s something that we’re excited about,” said Ek, adding that Spotify saw positive results from its digital live events thus far. “We want to provide as many opportunities for creators … to turn a listen into a fan, and turn fans into super fans, and increase the monetization for those creators.”

Though Spotify missed its target for monthly active users (MAUs) in Q2, other key metrics trended upward, like paid subscriber growth and revenue. The platform attributes this road bump in MAU growth to the lingering impact of COVID-19, as well as an issue Spotify had with its third-party email verification system.

“In full disclosure, this was an issue on our end,” said CFO Paul Vogel. “The estimate right now was that it was about 1 to 2 million of MAU growth that was impacted by the friction created by this email verification change. It’s since been corrected and should not be an impact in Q3.”

Of Spotify’s 365 million MAUs, 165 million (about 42.5%) are paid subscribers — that’s still far beyond its next biggest competitor, Apple Music, which had 60 million subscribers in 2019 but hasn’t released updated figures since.