Rivian electric vehicle charging stations are coming to yet another state park system. The EV startup said it would install its so-called “waypoint” chargers at all of Tennessee’s 56 state parks, just four months after announcing a similar agreement with the state of Colorado.

It’s the next step in Rivian’s plans to build out its network of more than 10,000 Level 2 AC chargers by the end of 2023. Installing chargers at state parks and other far-flung locales is a key facet of Rivian’s brand strategy: to position itself as an eco-friendly automaker for the outdoorsy type regardless of whether they own a Rivian vehicle. The waypoint chargers will be open to the public and accessible to all electric vehicle brands with a J1772 plug.

As part of the agreement with the Tennessee Department of Environment and Conservation, Rivian will design and install the chargers at no cost, and cover all servicing, maintenance and upgrades for 10 years. The automaker said it will also cover any needed utility upgrades associated with the charger installations — for example, improvements to electrical service panels or transformers. 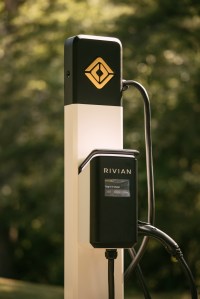 Rivian could start installing chargers as early as this fall. The Level 2 chargers can provide up to 11.5 kilowatts of power. That roughly translates to adding up to 25 miles of range every hour for both the R1T pickup truck and the R1S SUV. While waiting hours for a battery refill isn’t ideal for chargers located along highways and busy thoroughfares, Rivian says these sites will allow drivers “to top up on miles while enjoying a day trip or an overnight campout.”

Charging will initially be provided at no cost, though the automaker noted that future costs could be dependent on how the state decides to recover electricity costs.

Rivian Waypoints are separate from the company’s so-called Adventure Network, its plan to build more than 3,500 DC fast chargers exclusively for Rivian customers. Those chargers will be able to provide up to 140 miles of range in around 20 minutes.

Rivian founder RJ Scaringe has been open about his desire to develop a charging network inclusive of hard-to-reach places — a notable difference from a company like Tesla, whose proprietary network of Superchargers is located in more conventional and even high-end places.

“We’re excited about the opportunity to create Rivian charging locations that aren’t on the interstate, that help draw you or enable you to go to places that normally are not the kinds of places that invite or welcome electric vehicles because of charging infrastructure,” he said in a wide-ranging interview with TechCrunch’s Kirsten Korosec. “We’ve spent a lot of time thinking about how you can essentially create these curated drives where, depending on your point of interest, you can pick different paths. If you want to stop midway through the trip for a one-mile, two-mile or five-mile hike, you know, here’s a route that you want to take and here’s a charging location right next to it.”

Rivian is building its own EV charging network, but with an adventurous twist