Rivian, the EV startup backed by Amazon, Cox Automotive and T. Rowe Price, plans to install more than 10,000 chargers by the end of 2023. The network will have a dual purpose: quickly power its electric vehicle models with fast chargers installed along highways and provide Level 2 chargers at further afield locations next to parks, trailheads and other adventurous destinations.

The company said Thursday that its so-called Rivian Adventure Network will include more than 3,500 DC fast chargers at over 600 sites, which will only be accessible to owners of its electric vehicles. Each site will have multiple chargers and located on highways and main roads, often by cafes and shops, the company said in a blog post Thursday.

Rivian is also installing thousands of “waypoint” Level 2 AC chargers throughout the United States and Canada. These waypoint chargers will have a 11.5 kW charging speed, which should be able add up to 25 miles of range every hour for its R1T pickup truck and R1S SUV. The waypoint chargers will be strategically located along and near routes that Rivian customers are likely to take. They will be found at shopping centers restaurants, hotels, campsites and parks. The first of these waypoints, which will be open to the public and accessible to all electric vehicle brands with a J1772 plug, are being installed at all 42 Colorado State Parks. Each park will have two Rivian Waypoints each, with installation starting in July, the company said.

The decision to add this second layer of electric vehicle chargers is a direct appeal to Rivian’s customer base and one required to build confidence in the brand and electric vehicles, in general, Rivian founder and CEO RJ Scaringe told TechCrunch late last year during a wide-ranging interview about charging, batteries and automated driving.

Rivian’s approach is similar to Tesla with a few distinct differences. Tesla has built a proprietary network of more than 20,000 Superchargers, which are typically located next to highways and busy commuter corridors, and destination chargers installed at high-end hotels, restaurants and other spots an owner of a Model 3, Model S, Model Y or Model X might visit.

Rivian’s waypoint chargers serve the same purpose — albeit different kinds of locations — to the Tesla destination chargers. However, unlike Tesla’s chargers, Rivian’s waypoint site are open to the public and use the J1772 plug, a North American standard for electrical connectors for electric vehicles.

As part of its announcement, Rivian shared an image of a map of its fast chargers, indicating where they will be located. The map is not yet interactive, making it difficult to provide exact locations, but it appears that there are fast chargers located near Grand Canyon National Park as well as Zion National Park in Utah. 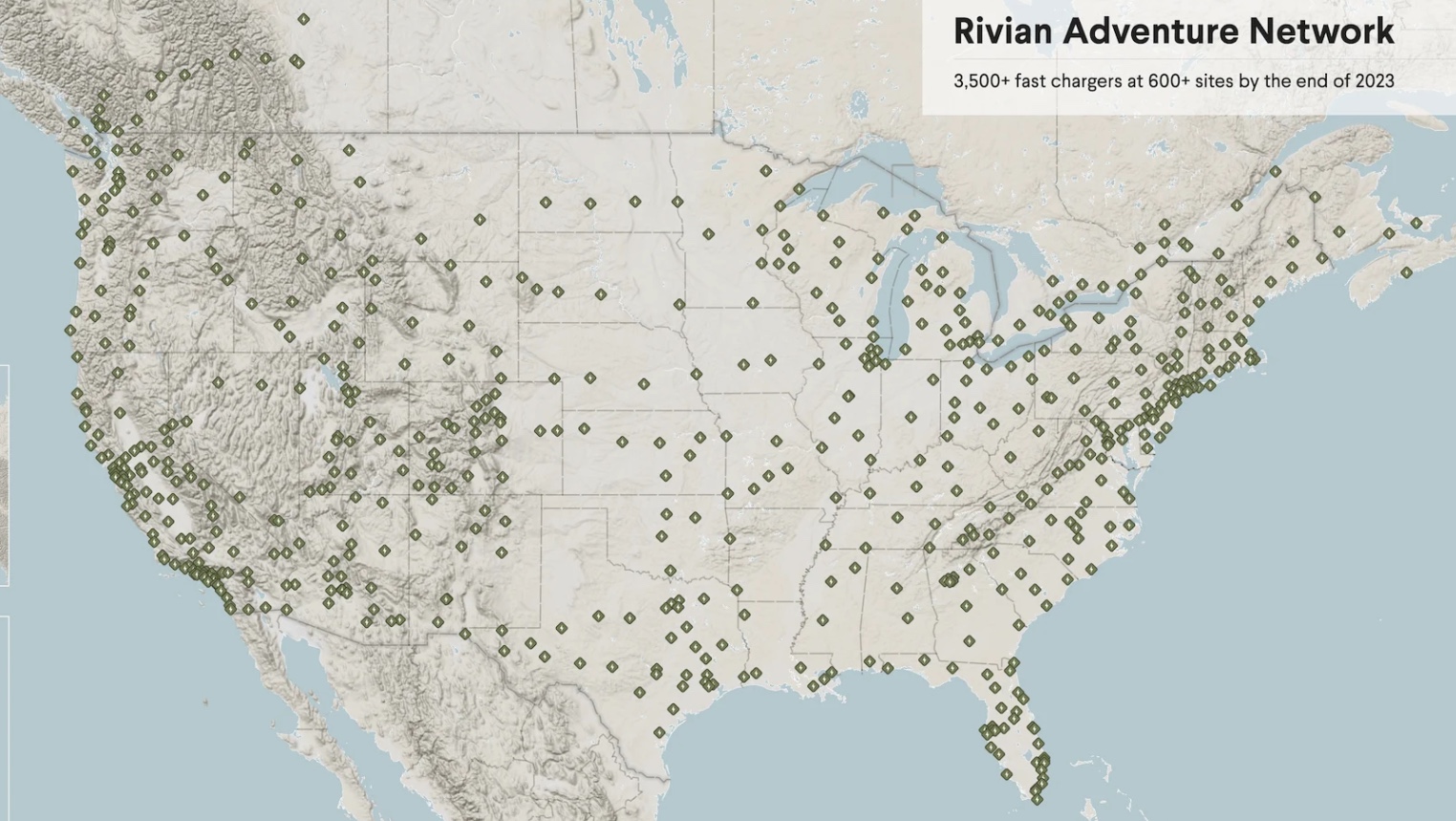 Rivian owners will be able to locate the waypoints as well as its branded fast chargers through the vehicle’s navigation and the accompanying app. Drivers will also be able to use the app or in-car system to and monitor charge status.

Rivian’s vehicles are equipped with a direct current connector used for rapid charging called Combined Charging System (CCS). CCS is an open international standard that in recent years has gained popularity in Europe and North America. This means that Rivian trucks and SUVs can also use any third-party CCS charging station without having to use an adapter.

The company indicated that the entire charging network will be powered by 100% renewable energy. That doesn’t mean that there will be a solar panel and energy storage system. Rivian clarified to TechCrunch at there will not be solar or wind on site. Instead, the 100% renewable energy goal will be achieved through partnerships with electricity providers. Rivian said it will use wind and solar wherever possible along with Renewable Energy Certificates to offset other power sources.

Building out such a large network will require capital, which Rivian hasn’t had trouble accessing. Rivian announced in January that it had raised $2.65 billion in a round led by funds and accounts advised by T. Rowe Price Associates Inc. Fidelity Management and Research Company, Amazon’s Climate Pledge Fund, Coatue and D1 Capital Partners as well as several other existing and new investors also participated, which pushed Rivian’s valuation to $27.6 billion, according to a person familiar with the investment round.