It’s hard to recall a consumer electronics category that matured quite as quickly as the fully wireless earbuds. Things went from a handful of plucky startups to virtually every hardware manufacturer over the course of a year or two. When Amazon entered the category, it did so in an already arguably overcrowded field.

The first question you have to answer when you’re late to the party is what you’re bringing to the table. Ultimately, the original Echo Buds didn’t have a particularly compelling answer to the question in a world where you can pick up a pair of Ankers for $40. There were a smattering of other issues, as well, that ultimately ended in a pretty lukewarm write-up from me.

A little over a year later, the Buds are back. And to its credit, Amazon has both addressed some of the concerns with the original and offered a pretty solid upgrade over the original models. What’s more, the company added some features that other companies have saved for Pro models, while keeping the price at a reasonable $129.

I’ve been using the Echo Buds as my go-to headphones for several days now and can say, overall, I’ve enjoyed the experience. The product inhabits a kind of middle ground — I would still recommend a number of other products in the “Price Is No Object” category, and the Buds are not cheap enough to qualify for the low end. 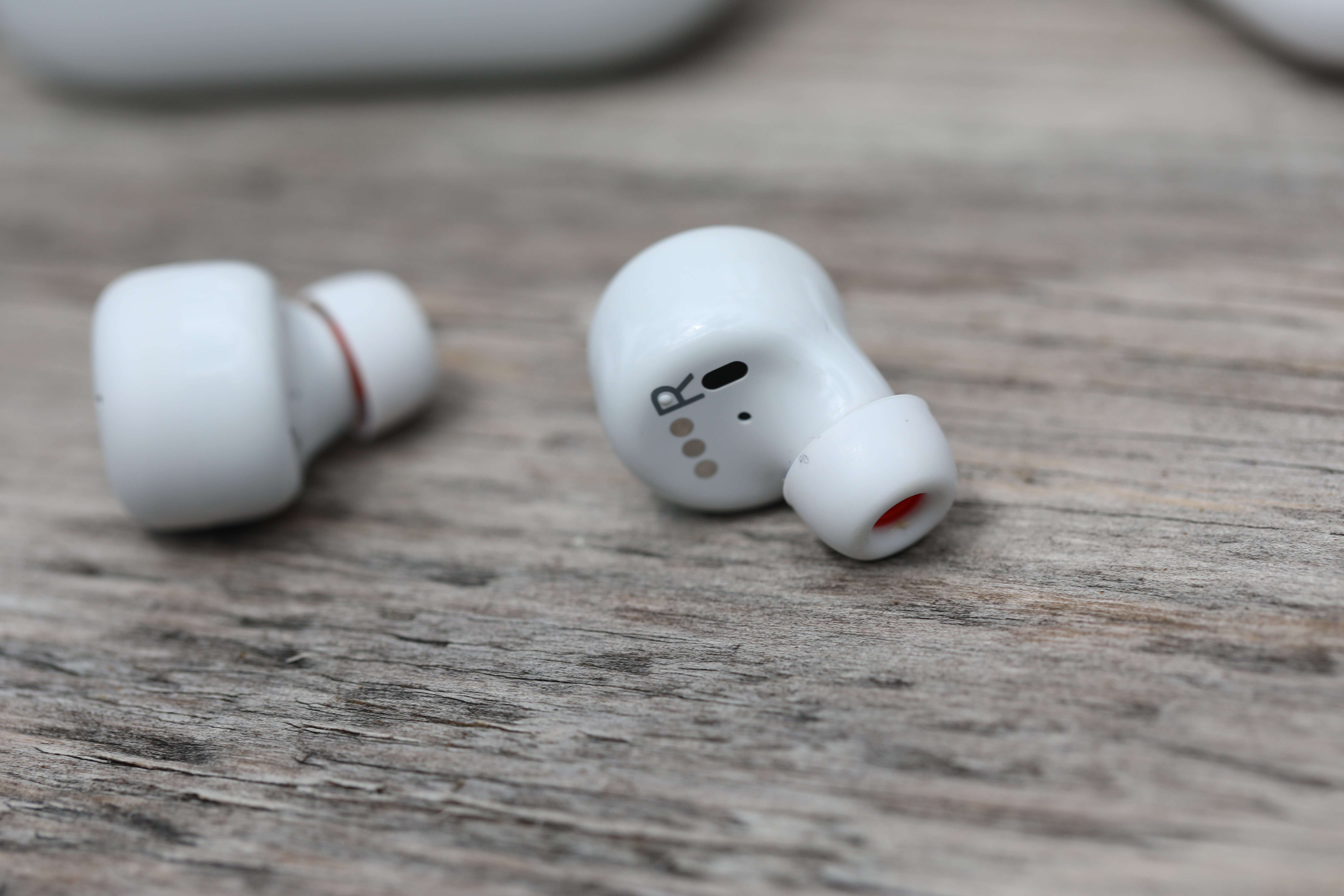 The new Echo Buds occupy a similar price point as Samsung Galaxy Buds Plus — and in a number of ways compare favorably. Most notable is the inclusion of active noise canceling, which has thus far mostly been the domain of more premium models. Amazon’s latest don’t offer the best ANC — nor really the best of anything — but they do form a well-rounded offering for the price point.

As Amazon has experienced with Alexa, the company’s at a disadvantage when competing directly with the likes of Apple, Google and Samsung, which can build devices that tie directly into their handsets. Amazon’s attempts at creating its own handsets have thus far failed, so the company has been forced to find another way to differentiate itself.

That has largely meant Alexa — and frankly, at the end of the day, the Echo Buds are really another way for the company to serve up its smart assistant. Built-in Alexa is mostly a selling point if you’re already invested in that ecosystem. I tend to prefer Assistant — especially given all of the other Google software offerings it integrates with, but for many intents and purposes, the personal assistants are often interchangeable. 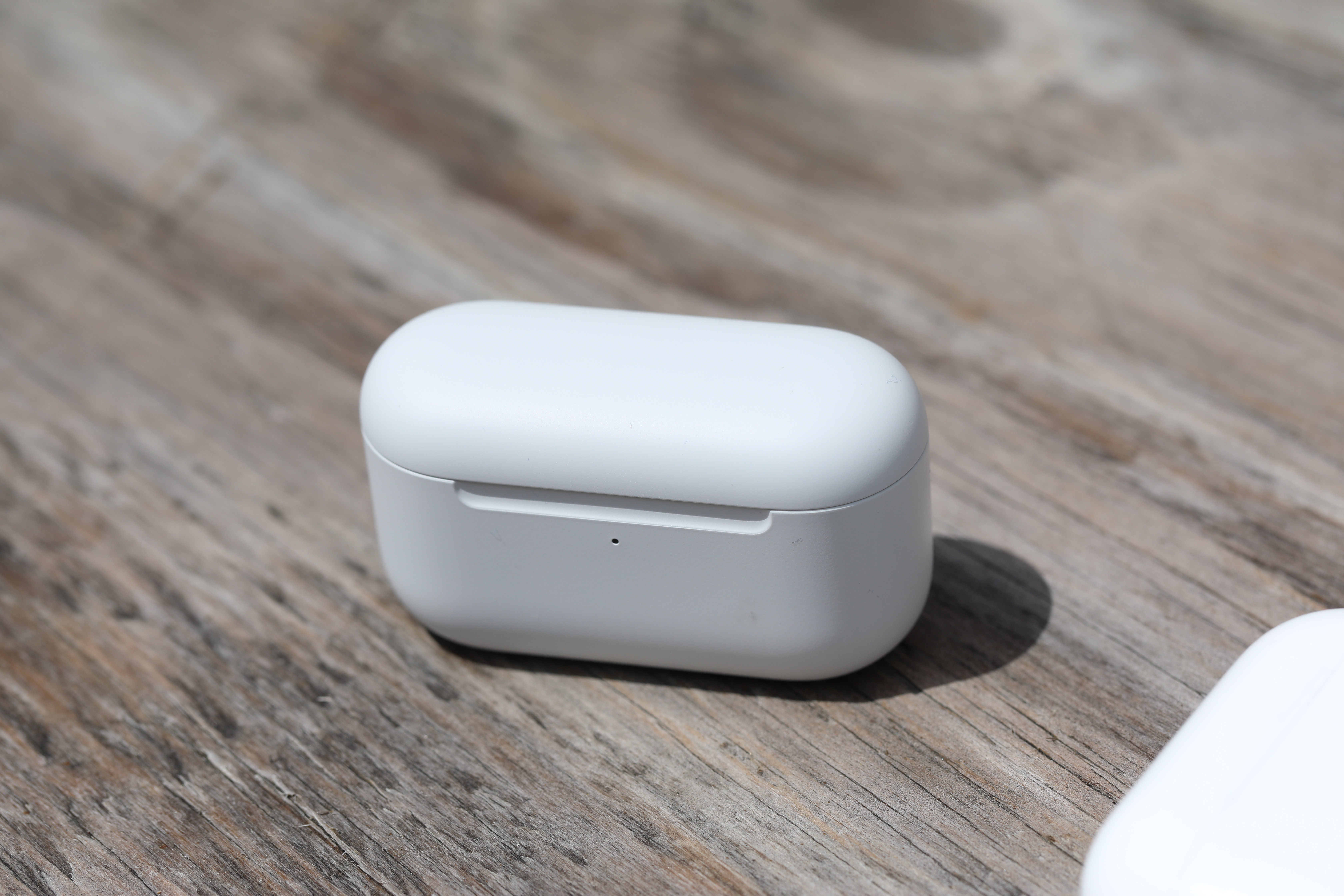 The new Buds are a fair bit smaller than their predecessors — but they’re not small exactly. They’re still a bit on the bulky side, and while they stayed put when using them indoors, I found they came loose a few times on a five-mile walk I did over the weekend. In that case, you’ll probably want to opt for the silicone cover, which sports small wings to better keep them in place. Probably the best option as well, if you’re planning to exercise with them in.

A weird design oversight here, however: I found the charging case doesn’t close all the way when the covers are on. The case doesn’t fully snap shut, and I learned the hard way last night that charging can be a bit tricky (in fact, I just got a “battery below 10%” warning in the right ear, while the left if currently in the high 90s. If you do end up using the wings, it’s best to pull them off after your workout — they’re also a bit on the snug side for too much extended use.

As Matt recently noted, the case is strongly…inspired by Apple. The differences are more pronounced when the two are next to one another, but the similarity is pretty undeniable: 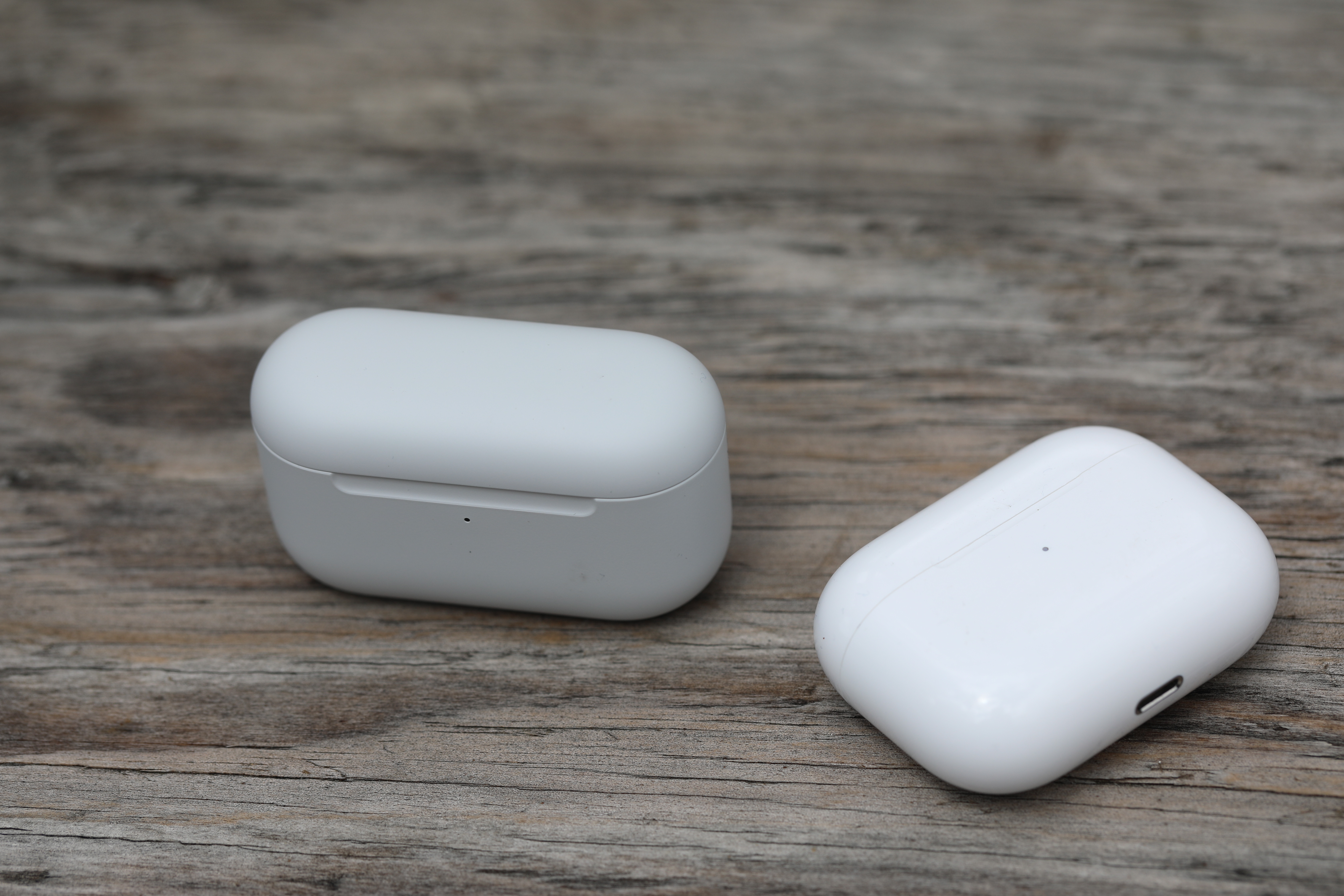 The case is longer and a little cheaper to the touch. Though the different shape does have the added bonus of being able to sit upright. For this reason, the charging port (USB-C) is on the rear of the case, rather than the bottom. There’s also a wireless charging case option, though that’s going to run you an added $20 — but probably worth it if you’ve got a Qi charger handy. There’s an Amazon arrow logo on the case (the company can’t help itself with the branding), but it’s subtle and located on the bottom. You’ll also find a light arrow on one of the earbuds.

The pair Amazon sent are “glacier white,” which is really more of a light gray. Again, it’s that much more pronounced when compared to the AirPods. Perhaps it’s a subtle way to further distinguish the design from Apple’s? Who knows.

Pairing is fairly easy. It’s not quite like using AirPods on an iPhone or Galaxy Buds on a Samsung, but it’s a couple of quick taps in the Alexa app. The company made the app the focal point of the Echo Buds for good reason. It serves as ground zero for everything you do on all of your Alexa-enabled devices. At a certain point, however, it may be time to consider breaking the app up a bit. It’s a bit of a double-edged sword — nobody needs more apps, but the thing is extremely noisy at this point. 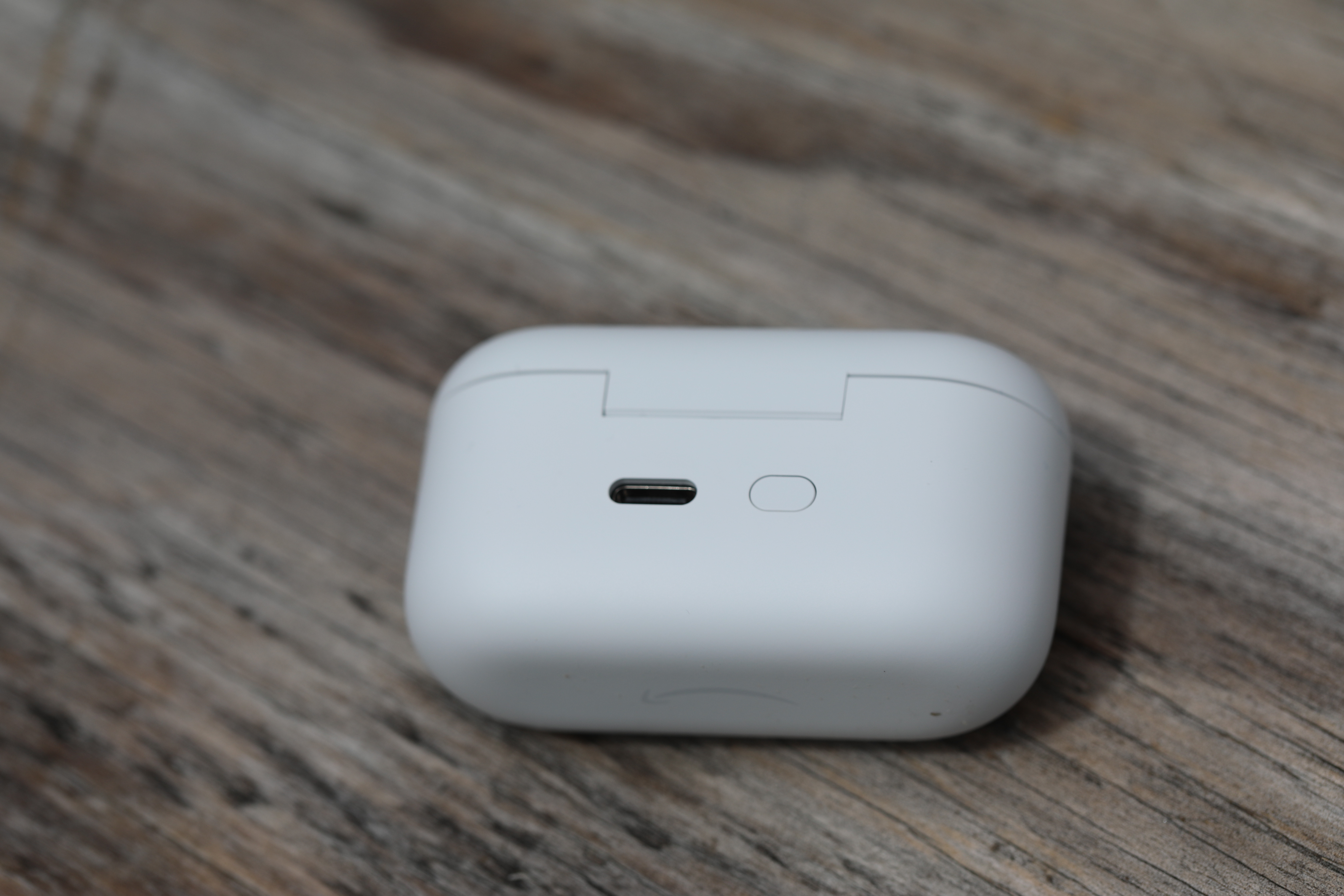 The upshot is that when the Buds are opened and paired, it surfaces the devices to the front. Tapping in lets you toggle between ANC and Pass Through modes (to my annoyance, I found that it would often default to the mode I wasn’t using when I put the Buds on for the first time in a while), turn the mic on and off and start Workout mode, which is opt-in. For people looking for more consistent workout tracking, an always-on wearable like a band or watch is a better choice.

The sound is a nice upgrade over the previous models. As with noise canceling, you can get better audio on more expensive systems, but for where this sits on the price spectrum, you’re getting solid sound for music, podcasting or calls. By default, it leans too heavily on bass for my preferences, but a few taps will take you to some equalizer sliders, where you can futz around with that.

The Bluetooth connection is pretty solid. I found I was able to walk around my apartment while leaving the iPhone in one place — a test failed by a number of the earbuds I’ve tested. I did, however, encounter some sync issues from time to time between the left and right bud when I was walking outside for long distances, creating an echoing effect. They can also send a sharp bit of feedback when held next to one another, owing to the fact that they don’t always instantly switch off when pulled out of the ear. 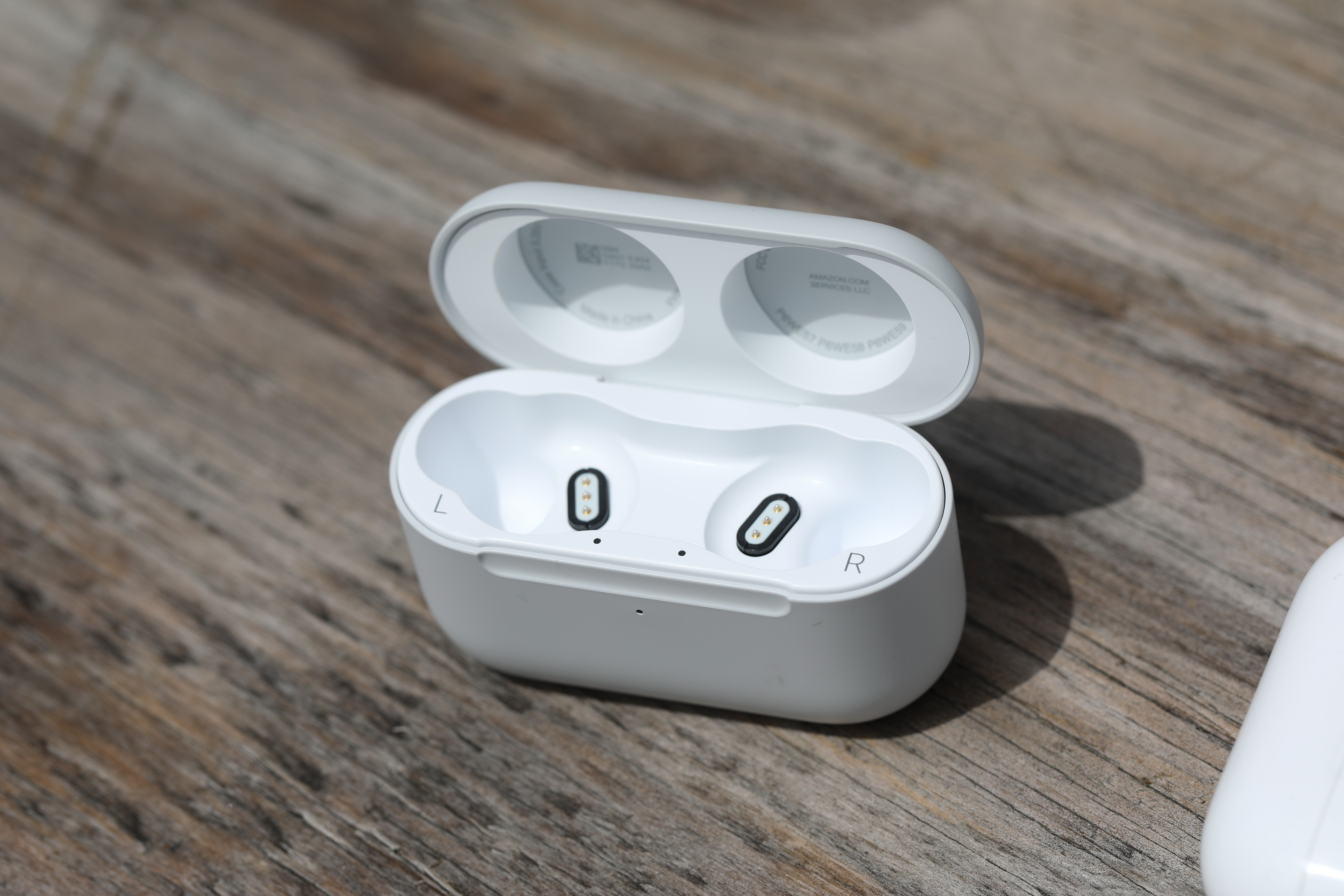 The stated battery is up to five hours on the Buds (6.5 with ANC off), and 15 total hours with the case. Compare that to the listed 4.5 and five hours on the AirPods and AirPods Pro and 24 hours with case. I certainly found I was able to get through a full day of use by dipping into the case once or twice.

The new Echo Buds present on upgrade over their predecessors on just about every level, making for a solid pair of mid-price earbuds. They don’t really address the “why” that their predecessor failed to. For Amazon, it’s about getting Alexa on more products. For consumers, the answer isn’t quite so easy.