Roku today is unveiling new hardware and software, including the latest version of its Roku OS media software, Roku OS 10, which expands support for AirPlay 2 and Apple’s HomeKit, and adds a variety of new features and optimizations focused on helping users get to content and stream faster. It’s also introducing its latest 4K player, the Roku Express 4K+; an updated version of its combo media player and soundbar; and an upgraded voice remote with a rechargeable battery and hands-free voice support via the “Hey Roku” command.

Of the three new devices, the Roku Voice Remote Pro ($29.99) may actually be the more interesting addition as it pushes Roku further into the “smart speaker” space, so to speak — except in this case, the “speaker” is a TV remote equipped with a mid-field microphone that’s always listening for the “Hey Roku” command. From a practical standpoint, that means you can leave the remote laying on your coffee table and instead speak commands like “Hey Roku, launch Netflix” or “search for free movies,” or “show me comedies,” or whatever else it is you want to watch — without having to first pick up the device and press the push-to-talk voice search button. 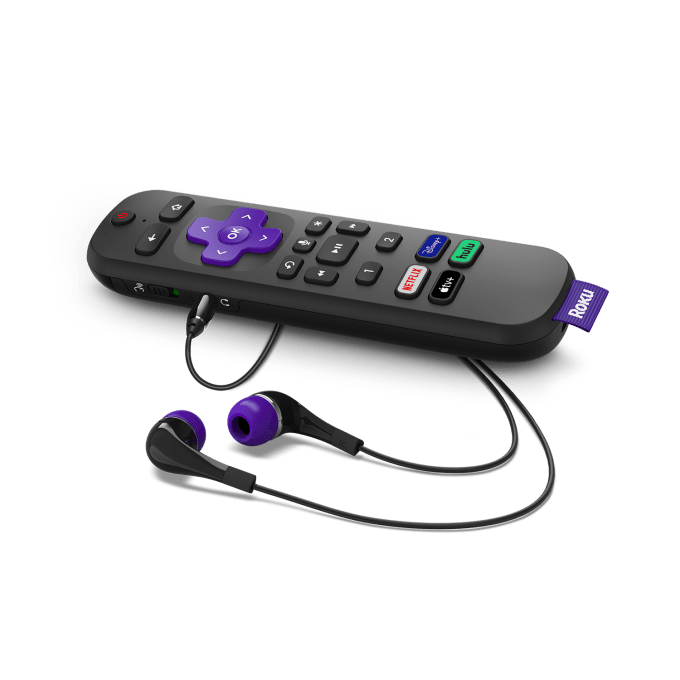 This feature, of course, also comes with concerns. Consumers may be wary of bringing more voice assistants into their home, after it was discovered that tech giants Google, Amazon and Apple had initially dropped the ball on respecting consumer privacy when it came to how users’ voice data was being stored and utilized. Though they’ve all made changes since, the experience may have left its mark on consumers’ minds.

For what it’s worth, Roku says it will retain some of the audio recordings it receives for technical support and to improve the quality of its service, much like the others in the market. And users can opt out of that data collection (via Roku.com/account/voice). The company notes that voice recordings are disassociated from the consumer’s account within 30 days, and it only allows access to Roku employees, not contractor workforces.

If this doesn’t appeal to you, the remote offers a mute button for the microphone if you want to upgrade for its other features and not use the hands-free listening.

The other features still make for a worthwhile upgrade, however, as this is Roku’s first remote with a rechargeable battery, for example. The device charges via a micro-USB cable, which is more environmentally friendly. It also offers preset buttons with access to Netflix, Hulu, Disney+ and, for the first time, Apple TV+. And it offers a lost remote finder feature (which works via voice, too); private listening via the built-in headphone jack; a push-to-talk voice button if you don’t want hands-free; and two personal shortcuts for favorite voice commands.

The voice remote is on sale today via Roku’s website and will be available in retail stores in May. 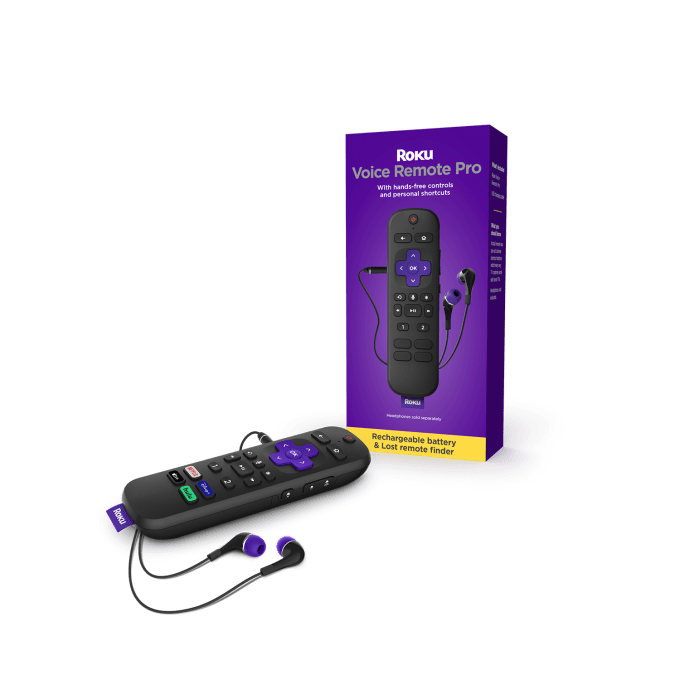 Another new device announced today is the Roku Express 4K+ ($39.99), which will replace the older Roku Premiere.

This digital media player targets first-time streamers and secondary TVs — which are now more often becoming 4K TVs, but where consumers don’t need the full specs of Roku’s top-of-the-line players. The Express 4K+ has a faster processor than the Premiere and more storage, as well as support for dual-band Wi-Fi. It works with third-party micro-USB and Ethernet adapters, which is a plus, as hardwiring your device was previously a feature only available on the pricier Roku Ultra.

The device also brings HDR 10+ to the Roku platform for the first time, though this support will soon make its way to the Roku Ultra through the upcoming Roku OS 10 software update. It additionally supports HD, 4K, HDR and HDR 10, and ships with a standard voice remote. 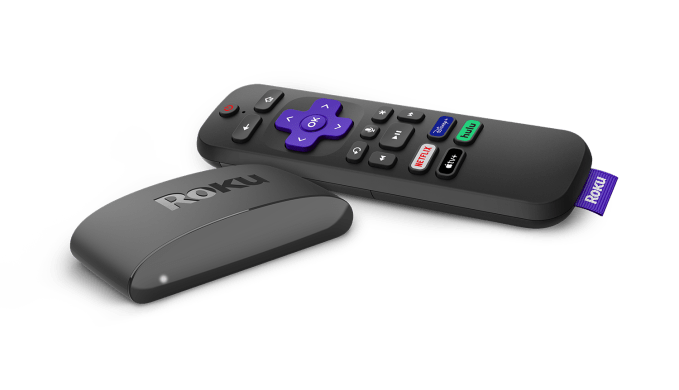 The device goes on sale in the U.S. in mid-May online and in retail stores. Walmart, a Roku partner, will have an exclusive version of the Roku Express 4K+ called Roku Express 4K ($35) which offers a better value by dropping the voice remote for the basic one.

Along with the launch of the media player and remote, Roku is updating its Roku Smart Soundbar in May. The device is being rebranded to the Roku Streambar Pro ($179.99), and will feature both 4K streaming and cinematic sound, but now ships with the same voice remote that comes with the Ultra, which means it supports private listening on headphones. And it adds support for a new Roku OS 10 feature called Virtual Surround, which aims to simulate a surround-sound setup for Roku Smart Soundbar and Roku Streambar Pro owners who don’t have another set of speakers to offer true surround sound. 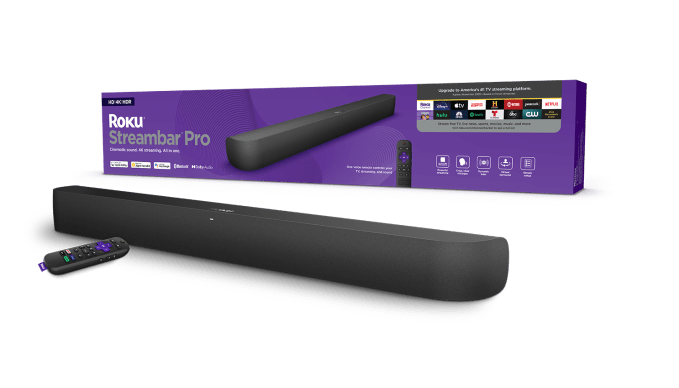 In addition to Virtual Surround and HDR 10+ support, Roku’s latest OS will roll out Apple AirPlay 2 and HomeKit support to more HD devices, including the Roku Express and some HD Roku TVs.

It will also add a customizable Live TV Channel Guide with favorites; automatic Wi-Fi network detection during setup (and it tells you which of your multiple channels is better to use); and an “instant resume” feature, which takes you back to where you left off when you relaunch a supported channel. 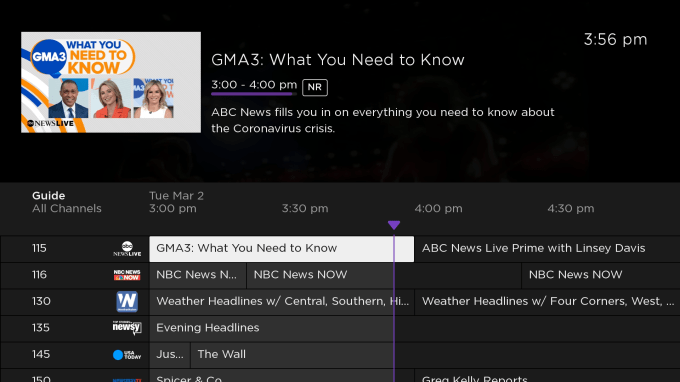 “Depending on the capabilities of the console and the TV, it can also mean turning on things like HDR gaming, variable refresh rates, high frame rate gaming like 120Hz, or maybe THX Certified Game Mode. So, without having to go through complex menus, a user just plugs in their console, and we know exactly how to give them the best experience on the game side,” noted Roku VP of Retail Product Strategy, Mark Ely. The feature works with both Xbox and PlayStation consoles and will also update the input on the Home Screen. 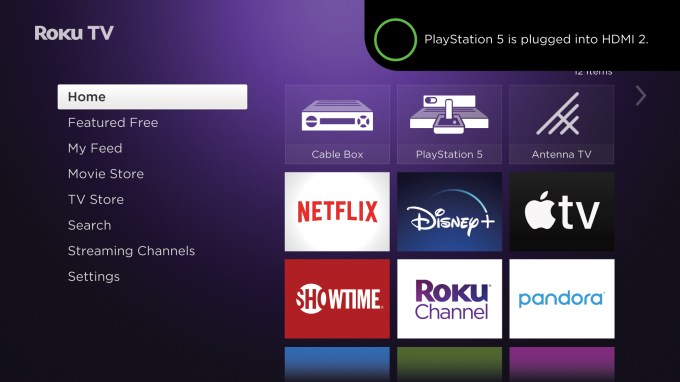 Roku OS 10 is rolling out to select Roku players now and is expected to roll out in the weeks ahead to all supported streaming players, including the all-new Roku Express 4K+ and Roku Streambar Pro, and all Roku TV models.

The new devices and software arrive after a year of increased at-home streaming due to the coronavirus pandemic, which forced users indoors and under lockdowns. Roku in Q4 2020 reported 51.2 million active accounts, up 39% for the year, and 58.7 billion streaming hours, while its free streaming hub, The Roku Channel, saw roughly 200% growth between just June and August 2020 when it added live linear viewing.

“Our business and streaming, in general, continues to grow and accelerate just because there’s such a shift from people that are getting rid of cable and moving over to streaming. And we saw, of course, with theater shutdowns, more people streaming first-run movies at home,” Ely noted. “So, streaming hours increased, and the volume of our products and the popularity of streaming devices increased, as well,” he added.

Roku’s continued momentum, however, cannot rely on pandemic impacts alone. Amazon remains a top competitor, and just rolled out its updated Fire TV interface months ago. There are also now rumors that Apple is planning an updated player of its own, with an Apple TV-HomePod combo of sorts, similar to the existing Roku Streambar. That will leave Roku with plenty of competition to keep it on its toes for months to come.