Among a number of claims on U.K. adtech lobby group MOW’s website is the canonical biggie that “Advertising funds the open web.”

This coalition of “marketers,” whose members are not being made public despite its sweeping claims to love web openness — lest, MOW says, Google rain down punishment upon its ranks of “top companies from across the globe” — recently complained to the U.K.’s competition regulator about the tech giant’s plan to end support for tracking cookies.

If you didn’t already guess it the “OW” in MOW’s acronym stands for “Open Web.” Aka (unknown) Marketers for an Open Web.

And today the CMA duly announced it is investigating Mountain View’s “Privacy Sandbox.” Though, as yet, no conclusions have been reached on whether Google’s plan threatens competition.

In truth, a variety of business models support open access to information on the internet.

Wikipedia, for example — surely the canonical example of the open web — relies upon reader donations to keep the lights on as a not-for-profit.

While — on the “exclusive access” side — crowdfunding sites like Patreon and the subscription platform Substack offer tools for creators to solicit regular monetary subscriptions from fans and backers to unlock gated content.

But it’s instructive to note how many online publishers have shifted, year over year, from free (ad-supported) access to content to selling subscriptions for (paywalled) content, often in addition to running ads.

Whether it’s the Financial Times, the New York Times, the Telegraph or Business Insider, the list of pay-to-access news sites keeps getting longer. Much like the consent flows that (also) pop up asking to process visitors’ information in order to target them with ads.

TechCrunch joined the ranks of subscription publications almost two years ago when we launched Extra Crunch. The main TC site continues to be free to access supported by ads and our events business. (NB: In 2021 our events are going fully virtual — which means, as a brief, bonus aside, they’ve never been so open and accessible!)

So how come all these paywalls are being thrown up if advertising funds the open web, as MOW claims?

The concise answer is that digital advertising pays publishers so poorly it can’t support producing quality content at the required scale on its own — thanks to myriad adtech intermediaries, click fraud and the big two: Google and Facebook; aka, the adtech duopoly, who take the lion’s share of revenue generated by digital advertising.

“We have found that intermediaries (the largest of which is Google) capture at least 35% of the value of advertising bought from newspapers and other content providers in the U.K.,” the CMA reported last summer, in a major market study.

Consumers turning to ad blockers to escape creepy ads and prevent privacy-hostile trackers from keeping real-time tabs on their digital activity and systematically passing this intel to scores of unknowns in an ad auction process that the U.K.’s own data protection regulator has said isn’t very lawful, is another relevant factor here.

Online advertising certainly funds something. But is that something the open web? That looks rather debatable at this point.

I bring all this up merely to provide context for a chance detail in the MOW story that I want to share — as it illustrates some of the issues in this high stakes tug-of-war between publishers, digital marketing and adtech players and a handful of big (ad)tech versus the poor, frustrated eyeballs of the average internet user.

One which threatens to keep steamrollering internet users’ right to protect their personal information from exploitation (and wider security-related risks) by, in the latest twist, co-opting competition regulators to erect barriers to pro-privacy reform. Assuming, that is, the CMA ends up naively swallowing dubious claims about what advertising does for the “open” internet — when evidence of what it actually does is but a click and a paywall/tortuously long consent to “share” your private data with hundreds of unknown firms away.

The regulator’s announcement today suggests it’s alive to the dysfunction surrounding internet users’ privacy and will take more than a superficial look at that issue — though if the ICO is the main rep in the room batting for users’ interests here that’s suboptimal, to say the least, given the latter’s storied reluctance to enforce the actual law against adtech.

But here’s the tidbit — which comes by way of a PR agency working for MOW. Earlier today it CC’d me into an email thread in which several staffers had been discussing monitoring the CMA news on behalf of its client.

I’m not naming the agency or any of the individuals involved to spare their blushes but in the thread — which begins with “FYI — The CMA are just about to announce a formal investigation into Google. We’ve drafted a comment which we will be circulating shortly” — staff can be seen asking to share logins to a number of newspaper websites and/or start a free trial in order to access newspaper copy for free, i.e., without having to pay for new subscriptions.

“Do we have an FT login? If so, could you get hte [sic] story they’ve just written on MOW off for me?” asks one staffer.

Shortly afterward there’s a discussion about starting a free trial on the Telegraph’s website as they talk about collating relevant coverage into a single document to be able to monitor developments for MOW.

One staffer chips in to warn “you need to put credit card details in to start a trial” — before suggesting the other has a go “to see if you find a way around it.”

This person follows up by saying they’ll “let you know if I manage to find a way around it.”

So, mmm, irony much? 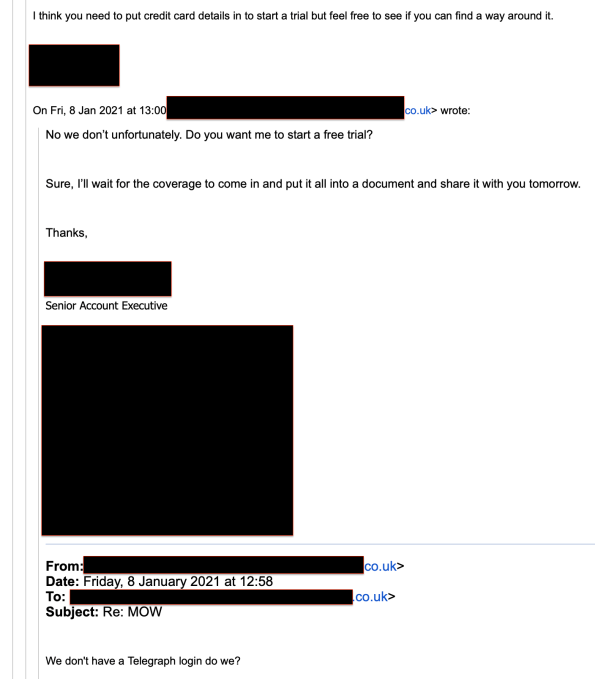 Redacted screengrab showing part of an email thread in which MOW’s PR agency discusses how to access newspaper sites to access copy to collate coverage on behalf of their client. Image Credits: TechCrunch.

In light of MOW’s advocacy for a “vibrant” ad-supported open web — which its website implies is aligned with the interests of publishers, marketers and adtech providers alike, i.e., not just with opaque adtech interests — it seems pretty relevant that an agency working for the industry group is uninterested, to put it politely, in paying for relevant newspaper content while being paid to lobby on adtech’s behalf.

On its website MOW argues that letting Google switch off third-party tracking cookies will be bad news for publishers because it says it will cut off marketers’ ability to measure ad campaign performance across different sites — claiming that will result in less effective ads that yield a lower return and thus less cash remitted by marketers to publishers.

However the CMA’s recent deep dive study of the digital marketing sector found an industry so opaque and riddled with black box algorithms that the regulator listed “lack of transparency” itself as a competition concern.

“Platforms with market power have the incentive and ability to increase prices, for example, or to overstate the quality and effectiveness of their advertising inventory,” it warned in the report. “They can take steps to reduce the degree of transparency in digital advertising markets, reducing other publishers’ ability to demonstrate the effectiveness of their advertising and forcing advertisers to rely on information and metrics provided by those platforms. And the lack of transparency undermines the ability of market participants to make the informed decisions necessary to drive competition. The upshot of all of these issues is that competition is weakened and trust in the market is eroded.”

Given that overarching assessment, who would take an opaque coalition of marketers’ word for it that current-gen cookie tracking of the entire internet yields irreplaceably valuable performance metrics?

Or that such privacy-hostile tracking is the only viable way to support a “vibrant open web”?

“The lack of transparency is particularly severe in the open display market where publishers and advertisers rely on intermediaries to manage the process of real-time bidding and ad serving but cannot observe directly what the intermediaries are doing or, in some cases, how much they are being charged,” the CMA goes on, sharpening its concerns about the extent of the obfuscation that cloaks the practices of adtech middlemen. “Market participants such as newspapers and advertisers typically do not have visibility of the fees charged along the entire supply chain and this limits their ability to make optimal choices on how to buy or to sell inventory, reducing competition among intermediaries.”

One thing is clear: The adtech industry needs a whole lot of disinfecting sunlight to be shone in. And that clarification process will surely demand substantial reform.

Refusing to change how things are done by claiming there’s simply no other way to preserve the web “as we know it” is as ridiculous an idea as it is anti-innovation in sentiment.

Returning to the misfired email thread, we contacted MOW’s PR agency to ask whether or not the account includes expenses for relevant newspaper subscriptions. It told us these would come out of a central agency fund. Additionally — having checked back on it — the agency said it did in fact have subscriptions to the newspaper sites in question.

The spokesperson explained that the staffers involved just hadn’t realized at the time — in the heat of the “day-to-day PR” moment (and whilst wrangling remote-working-impacted comms). And, presumably, as all those subscription login screens threw up barriers to accessing the content they needed in the heat of the moment.

This (senior) spokesperson blamed themselves for what they described as a “cock up” — including the soliciting of a “paywall workaround” — going on to take full mea culpa responsibility and emphasizing it had nothing to do with MOW or with the MOW account.

But, well, if an agency working for an adtech lobby group whose key claim is that “ads support the open internet” is unable to access the online content they need to do their job without a subscription, what does that tell us about how much of an open internet the advertising industry is actually funding right now?