Grab popcorn. As internet fights go, this one deserves your full attention — because the fight is over your attention. Your eyeballs and the creepy ads that trade data on you to try to swivel ’em.

In the blue corner, the Internet Advertising Bureau’s (IAB) CEO, Randall Rothenberg, who has been taking to Twitter increasingly loudly in recent days to savage Europe’s privacy framework, the GDPR, and bleat dire warnings about California’s Consumer Privacy Act (CCPA) — including amplifying studies he claims show “the negative impact” on publishers.

More on the negative impact of #GDPR on publishers (and more reasons @iab is trying to fix #CCPA so publishers, brands, & retailers don’t get killed). https://t.co/BWtGNYGTJq

NB: The IAB is a mixed membership industry organization which combines advertisers, brands, publishers, data brokers* and adtech platform tech giants — including the dominant adtech duopoly, Google and Facebook, who take home ~60% of digital ad spend. The only entity capable of putting a dent in the duopoly, Amazon, is also in the club. Its membership reflects the sprawling interests attached to the online ad industry, and, well, the personal data that currently feeds it (your eyeballs again!), although some members clearly have pots more money to spend on lobbying against digital privacy regs than others.

In a what now looks to have been a deleted tweet last month, Rothenberg publicly professed himself proud to have Facebook as a member of his “publisher defence” club. Though, admittedly, per the above tweet, he’s also worried about brands and retailers getting “killed.” He doesn’t need to worry about Google and Facebook’s demise because that would just be ridiculous.

Now, in the — I wish I could call it “red top” corner, except these newspaper guys are anything but tabloid — we find premium publishers biting back at Rothenberg’s attempts to trash-talk online privacy legislation.

One of the primary reasons we need the #GDPR and #CCPA (and more) today is because the @iab, under @r2rothenberg's leadership, has been given 20 years to self-regulate and has used the time to do [checks notes] nothing whatsoever.https://t.co/hBS9d671LU

I’m going to quote Berjon in full because every single tweet packs a beautifully articulated punch:

Next time Facebook talks about how it can self-regulate its access to data I suggest you cc that entire thread.

Also chipping in on Twitter to champion Berjon’s view about the IAB’s leadership vacuum in cleaning up the creepy online ad complex, is Aram Zucker-Scharff, aka the ad engineering director at — checks notes — The Washington Post.

His punch is more of a jab — but one that’s no less painful for the IAB’s current leadership.

“I say this rarely, but this is a must read,” he writes, in a quote tweet pointing to Berjon’s entire thread.

I say this rarely, but this is a must read, Thread: https://t.co/FxKmT9bp7r

Another top-tier publisher’s commercial chief also told us in confidence that they “totally agree with Robin” — although they didn’t want to go on the record today.

In an interesting twist to this “mixed member online ad industry association vs people who work with ads and data at actual publishers” slugfest, Rothenberg replied to Berjon’s thread, literally thanking him for the absolute battering.

“Yes, thank you – that’s exactly where we’re at & why these pieces are important!” he tweeted, presumably still dazed and confused from all the body blows he’d just taken. “@iab supports the competitiveness of the hundreds of small publishers, retailers, and brands in our global membership. We appreciate the recognition and your explorations,@robinberjon.”

Yes, thank you – that’s exactly where we’re at & why these pieces are important! @iab supports the competitiveness of the hundreds of small publishers, retailers, and brands in our global membership. We appreciate the recognition and your explorations, @robinberjon & @Bershidsky https://t.co/WDxrWIyHXd

Rothenberg also took the time to thank Bloomberg columnist Leonid Bershidsky, who’d chipped into the thread to point out that the article Rothenberg had furiously retweeted actually says the GDPR “should be enforced more rigorously against big companies, not that the GDPR itself is bad or wrong.”

Who is Bershidsky? Er, just the author of the article Rothenberg tried to nega-spin. So… uh… owned.

May I point out that the piece that's cited here (mine) says the GDPR should be enforced more rigorously against big companies, not that the GDPR itself is bad or wrong?

But there’s more! Berjon tweeted a response to Rothenberg’s thanks for what the latter tortuously referred to as “your explorations” — I mean, the mind just boggles as to what he was thinking to come up with that euphemism — thanking him for reversing his position on GDPR, and for reversing his prior leadership vacuum on supporting robustly enforced online privacy laws.

“It’s great to hear that you’re now supporting strong GDPR enforcement,” he writes. “It’s indeed what most helps the smaller players. A good next step to this conversation would be an @iab statement asking to transpose the GDPR to US federal law. Want to start drafting something?”

It's great to hear that you're now supporting strong GDPR enforcement. It's indeed what most helps the smaller players. A good next step to this conversation would be an @iab statement asking to transpose the GDPR to US federal law. Want to start drafting something?

We’ve asked the IAB if, in light of Rothenberg’s tweet, it now wishes to share a public statement in support of transposing the GDPR into U.S. law. We’ll be sure to update this post if it says anything at all.

We’ve also screengrabbed the vinegar strokes of this epic fight — as an insurance policy against any further instances of the IAB hitting the tweet delete button. (Plus, I mean, you might want to print it out and get it framed.) 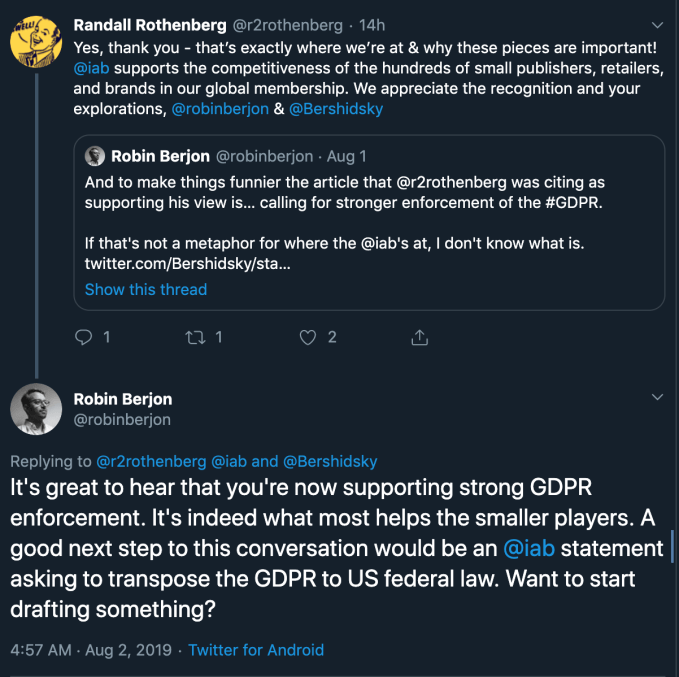 Some light related reading can be found here: