Apple is today rolling out an update to its video creation app, Clips, which brings much-needed support for vertical videos, allowing for sharing to TikTok and the “Stories” feature in other social apps. The addition is one of several arriving with the release of Clips 3.0, which also introduces support for horizontal video, as well as HDR for iPhone 12 users, along with other smaller changes, like new stickers, sounds and posters, for example.

Apple’s Clips was first launched in 2017 with an eye on being a first stop for video creation before publishing to Instagram. But the app’s support for only square-formatted video has since become outdated. Casual social videos today are often now published to newer video-centric social media networks, like TikTok and its short-form rivals, including Triller, Dubsmash, Instagram Reels and others.

Apple, in fact, says that support for vertical video had become its No. 1 request from users since Clips launched.

Clips 3.0 supports both 16:9 and 4:3 aspect ratios, in addition to the square format. When the app is opened on iPad, it will default to the landscape format, which can be particularly useful in educational scenarios where teachers are using the app in classrooms with students.

On iPad, Clips users can also interact with the app when their iPad is in a case, like Magic Keyboard for iPad and others. It also supports use with a mouse or trackpad, and allows users to write text in text fields using Apple Pencil. 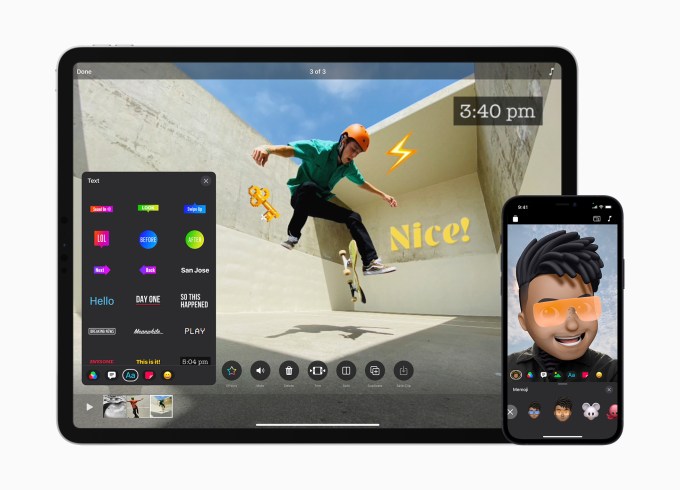 The new app will also now support recording HDR video footage with the rear-facing camera on iPhone 12 and iPhone 12 Pro.

Clips’ overall user interface has been refreshed, too. You’ll notice a redesigned record screen that floats on top of the viewer when shooting vertically or horizontally, which could help to address some user complaints of the app feeling “slow.”

Users will also be able to more easily view and access the various Effects options, their Clips Projects and other media.

The tweaks to the user interface also feel a bit like a nod to TikTok. For example, you can now swipe up on the Effects to see a full-height card that shows you the available stickers and text labels to add to your videos. This format of a pop-up card filled with effects is similar to TikTok — though there it’s opened with a button tap and not a gesture. 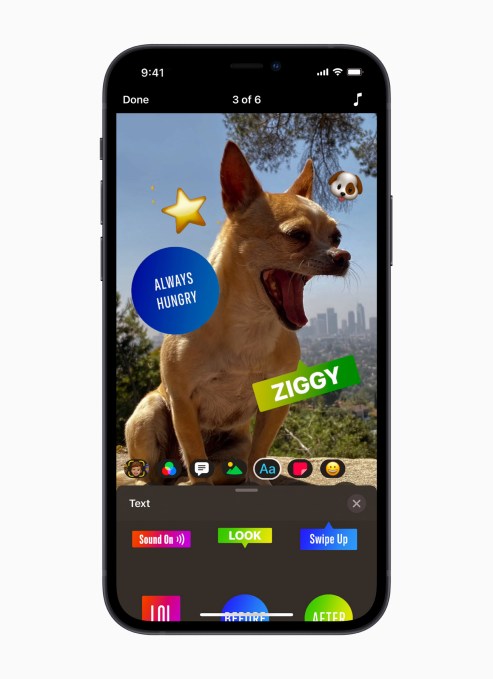 The update also brings more content options, including eight new social stickers (like “Sound On” for Instagram Stories), 24 new royalty-free soundtracks (bringing the total library to 100), and six new arrows and shapes. From the new Media browser in Clips, you can pull in your own photos and videos or toggle over to a Posters section to pick from 70 customizable, animated full-screen title cards that can be added to your video.

Though Clips hasn’t had as much attention as some of Apple’s other apps — its last update was six months ago, for instance — it has gained a following. Apple says that users create “millions” of Clips projects per day, and it sees higher usage in the U.S., U.K. and China.

This year, Clips usage increased by 30%, Apple noted — a change that could have been brought about by the shift to virtual schooling which saw teachers in need of tools for creating digital content. 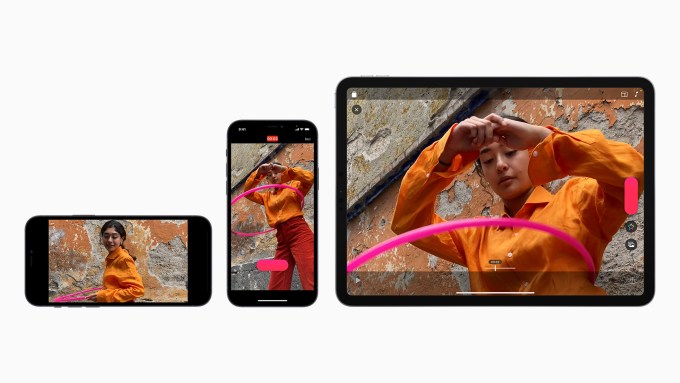 With its expanded focus on vertical video, Clips has the potential to reach a much broader audience.

Today, many users prep videos for Stories or TikTok on third-party apps, like InShot, Prequel, Splice, PicCollage, Canva, VSCO, Funimate, KineMaster, Magisto, CapCut and others topping the App Store charts. But Clips, until now, couldn’t compete because it didn’t include vertical video support at all.

The new version of Clips is rolling out today to users worldwide.