Research papers come out far too rapidly for anyone to read them all, especially in the field of machine learning, which now affects (and produces papers in) practically every industry and company. This column aims to collect the most relevant recent discoveries and papers — particularly in but not limited to artificial intelligence — and explain why they matter.

This week, a startup that’s using UAV drones for mapping forests, a look at how machine learning can map social media networks and predict Alzheimer’s, improving computer vision for space-based sensors and other news regarding recent technological advances.

Machine learning tools are being used to aid diagnosis in many ways, since they’re sensitive to patterns that humans find difficult to detect. IBM researchers have potentially found such patterns in speech that are predictive of the speaker developing Alzheimer’s disease.

The system only needs a couple minutes of ordinary speech in a clinical setting. The team used a large set of data (the Framingham Heart Study) going back to 1948, allowing patterns of speech to be identified in people who would later develop Alzheimer’s. The accuracy rate is about 71% or 0.74 area under the curve for those of you more statistically informed. That’s far from a sure thing, but current basic tests are barely better than a coin flip in predicting the disease this far ahead of time.

As Alzheimer’s costs soar, startups like Neurotrack raise cash to diagnose and treat the disease

This is very important because the earlier Alzheimer’s can be detected, the better it can be managed. There’s no cure, but there are promising treatments and practices that can delay or mitigate the worst symptoms. A non-invasive, quick test of well people like this one could be a powerful new screening tool and is also, of course, an excellent demonstration of the usefulness of this field of tech.

(Don’t read the paper expecting to find exact symptoms or anything like that — the array of speech features aren’t really the kind of thing you can look out for in everyday life.)

Making sure your deep learning network generalizes to data outside its training environment is a key part of any serious ML research. But few attempt to set a model loose on data that’s completely foreign to it. Perhaps they should!

Researchers from Uppsala University in Sweden took a model used to identify groups and connections in social media, and applied it (not unmodified, of course) to tissue scans. The tissue had been treated so that the resultant images produced thousands of tiny dots representing mRNA.

Normally the different groups of cells, representing types and areas of tissue, would need to be manually identified and labeled. But the graph neural network, created to identify social groups based on similarities like common interests in a virtual space, proved it could perform a similar task on cells. (See the image at top.)

“We’re using the latest AI methods — specifically, graph neural networks, developed to analyze social networks — and adapting them to understand biological patterns and successive variation in tissue samples. The cells are comparable to social groupings that can be defined according to the activities they share in their social networks,” said Uppsala’s Carolina Wählby.

It’s an interesting illustration not just of the flexibility of neural networks, but of how structures and architectures repeat at all scales and in all contexts. As without, so within, if you will.

The vast forests of our national parks and timber farms have countless trees, but you can’t put “countless” on the paperwork. Someone has to make an actual estimate of how well various regions are growing, the density and types of trees, the range of disease or wildfire, and so on. This process is only partly automated, as aerial photography and scans only reveal so much, while on-the-ground observation is detailed but extremely slow and limited.

How to access ‘America’s Seed Fund,’ the $3 billion SBIR program

Treeswift aims to take a middle path by equipping drones with the sensors they need to both navigate and accurately measure the forest. By flying through much faster than a walking person, they can count trees, watch for problems and generally collect a ton of useful data. The company is still very early-stage, having spun out of the University of Pennsylvania and acquired an SBIR grant from the NSF.

“Companies are looking more and more to forest resources to combat climate change but you don’t have a supply of people who are growing to meet that need,” Steven Chen, co-founder and CEO of Treeswift and a doctoral student in Computer and Information Science (CIS) at Penn Engineering said in a Penn news story. “I want to help make each forester do what they do with greater efficiency. These robots will not replace human jobs. Instead, they’re providing new tools to the people who have the insight and the passion to manage our forests.”

That night, a forest flew

Another area where drones are making lots of interesting moves is underwater. Oceangoing autonomous submersibles are helping map the sea floor, track ice shelves and follow whales. But they all have a bit of an Achilles’ heel in that they need to periodically be picked up, charged and their data retrieved.

Purdue engineering professor Nina Mahmoudian has created a docking system by which submersibles can easily and automatically connect for power and data exchange. 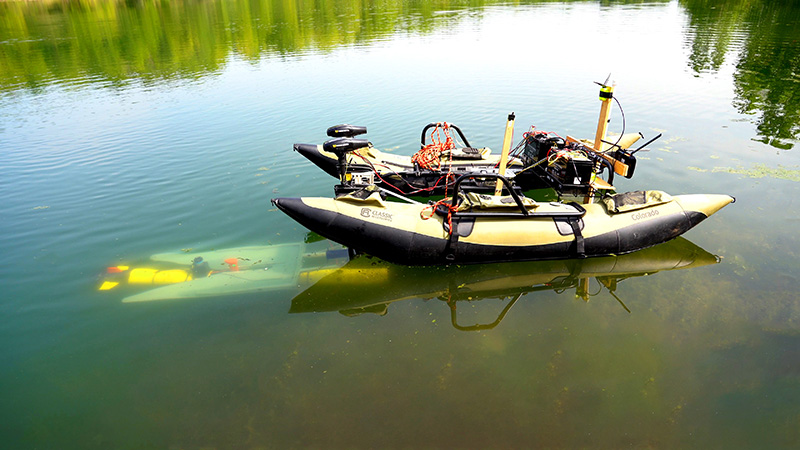 The craft needs a special nosecone, which can find and plug into a station that establishes a safe connection. The station can be an autonomous watercraft itself, or a permanent feature somewhere — what matters is that the smaller craft can make a pit stop to recharge and debrief before moving on. If it’s lost (a real danger at sea), its data won’t be lost with it.

You can see the setup in action below:

Drones may soon become fixtures of city life as well, though we’re probably some ways from the automated private helicopters some seem to think are just around the corner. But living under a drone highway means constant noise — so people are always looking for ways to reduce turbulence and resultant sound from wings and propellers. 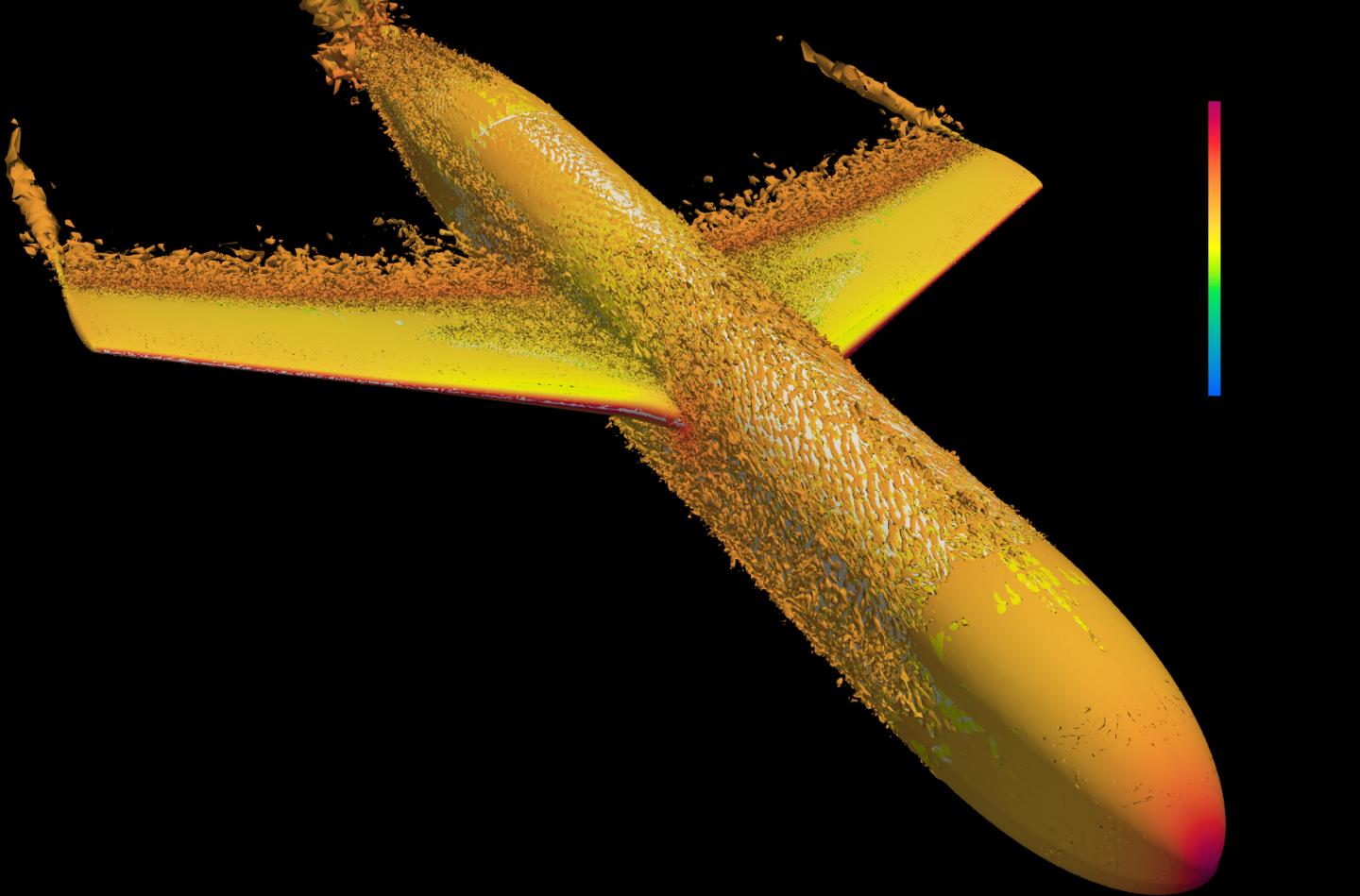 It looks like it’s on fire, but that’s turbulence.

Researchers at the King Abdullah University of Science and Technology found a new, more efficient way to simulate the airflow in these situations; fluid dynamics is essentially as complex as you make it, so the trick is to apply your computing power to the right parts of the problem. They were able to render only flow near the surface of the theoretical aircraft in high resolution, finding past a certain distance there was little point knowing exactly what was happening. Improvements to models of reality don’t always need to be better in every way — after all, the results are what matter.

Computer vision algorithms have come a long way, and as their efficiency improves they are beginning to be deployed at the edge rather than at data centers. In fact it’s become fairly common for camera-bearing objects like phones and IoT devices to do some local ML work on the image. But in space it’s another story.

Performing ML work in space was until fairly recently simply too expensive power-wise to even consider. That’s power that could be used to capture another image, transmit the data to the surface, etc. HyperScout 2 is exploring the possibility of ML work in space, and its satellite has begun applying computer vision techniques immediately to the images it collects before sending them down. (“Here’s a cloud — here’s Portugal — here’s a volcano…”)

For now there’s little practical benefit, but object detection can be combined with other functions easily to create new use cases, from saving power when no objects of interest are present, to passing metadata to other tools that may work better if informed.

In with the old, out with the new

Machine learning models are great at making educated guesses, and in disciplines where there’s a large backlog of unsorted or poorly documented data, it can be very useful to let an AI make a first pass so that graduate students can use their time more productively. The Library of Congress is doing it with old newspapers, and now Carnegie Mellon University’s libraries are getting into the spirit.

CMU’s million-item photo archive is in the process of being digitized, but to make it useful to historians and curious browsers it needs to be organized and tagged — so computer vision algorithms are being put to work grouping similar images, identifying objects and locations, and doing other valuable basic cataloguing tasks.

“Even a partly successful project would greatly improve the collection metadata, and could provide a possible solution for metadata generation if the archives were ever funded to digitize the entire collection,” said CMU’s Matt Lincoln.

A very different project, yet one that seems somehow connected, is this work by a student at the Escola Politécnica da Universidade de Pernambuco in Brazil, who had the bright idea to try sprucing up some old maps with machine learning.

The tool they used takes old line-drawing maps and attempts to create a sort of satellite image based on them using a Generative Adversarial Network; GANs essentially attempt to trick themselves into creating content they can’t tell apart from the real thing. 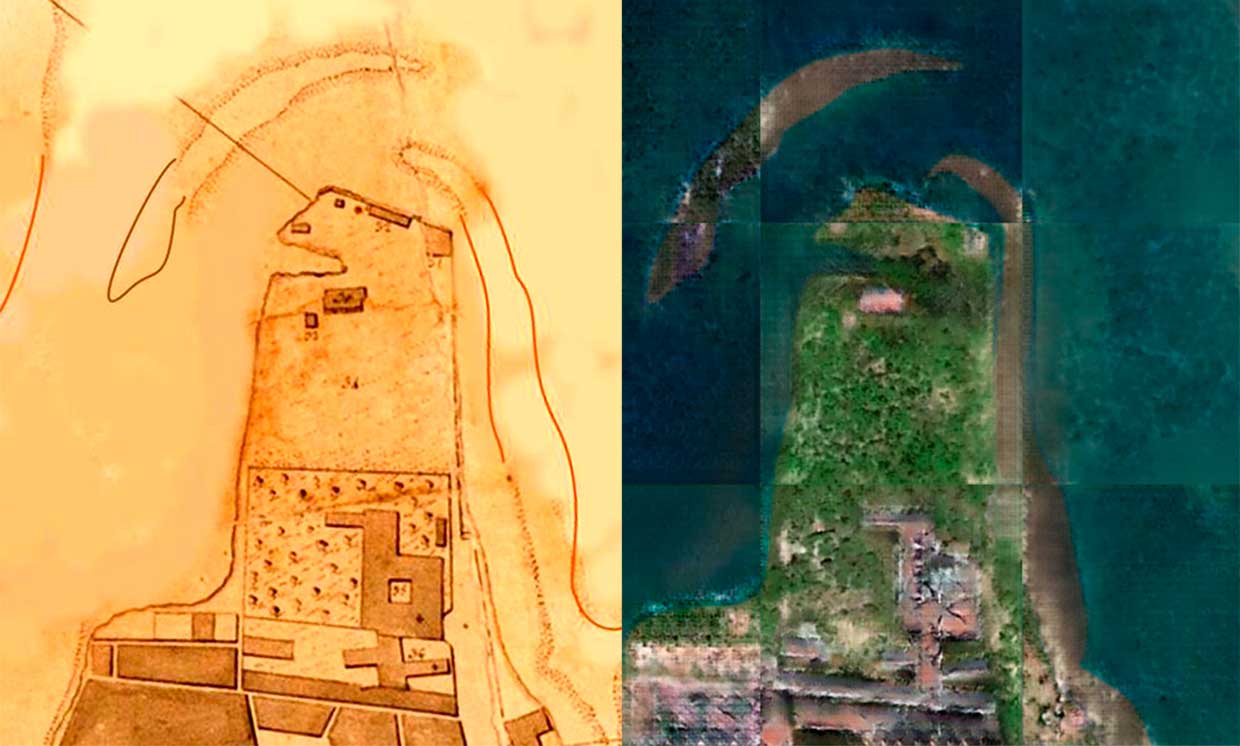 Well, the results aren’t what you might call completely convincing, but it’s still promising. Such maps are rarely accurate but that doesn’t mean they’re completely abstract — recreating them in the context of modern mapping techniques is a fun idea that might help these locations seem less distant.