A new forecast released today estimates Amazon’s delayed Prime Day sales event will top last year’s by bringing in an estimated nearly $10 billion in worldwide sales when it runs later this month. According to eMarketer, which released its first-ever Prime Day forecast, consumers will continue to spend heavily on e-commerce and seek out deals ahead of the 2020 holiday season, benefitting the major sales event.

These estimates are fairly in line with those from other firms. For example, Internet Retailer had estimated Prime Day 2019 reached $7.16 billion in global sales, up from $4.19 billion in the year prior. Amazon doesn’t detail Prime Day sales volume, specifically, but last year said it had sold over 175 million items during the event. 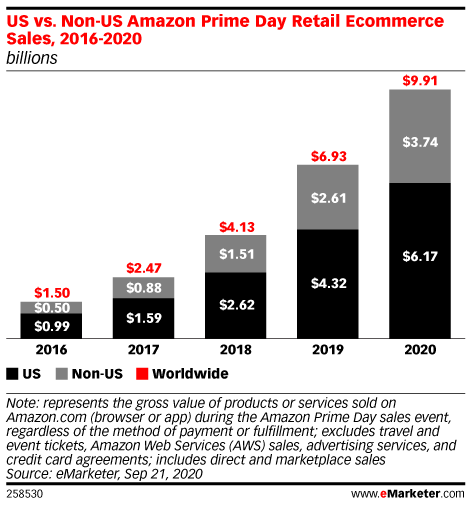 Forecasting for this year’s Prime Day, of course, has been much more difficult due to the coronavirus pandemic’s impact on the e-commerce industry. The health crisis has disrupted supply chains, causing delays, while consumer demand can be unpredictable. Some past boosts in e-commerce spending for major retailers was also closely tied to government stimulus checks.

Due to the pandemic, Amazon this year decided to move its annual sales holiday from mid-July to October for most markets. Meanwhile, the retailer ran Prime Day in India in August — later than it had been held in prior years, but ahead of other countries’ Prime Day events planned for 2020. Following the India event, Amazon reported record seller participation, and said it gained at least 1 million new subscribers for its Prime membership program.

Despite the changes to Prime Day, the analysts at eMarketer believe Prime Day’s predictability will help continue to drive traffic and sales this year.

“Since Prime Day’s 2015 debut, Amazon has expanded the scale and spectacle of the event in a mostly predictable fashion,” said Andrew Lipsman, eMarketer principal analyst. “The generally incremental changes from year to year gave customers and sellers a better sense of what to expect, with Lightning Deals and heavily discounted Echos and Fire TVs taking center stage. Sellers developed a playbook for their promotions and advertising strategy and could plan their inventory accordingly,” he added.

Though Prime Day doesn’t officially begin until October 13, Amazon has already started to run some early deals for Prime subscribers, including a discounted Echo Show 5 ($45 instead of $90), a discounted Echo Auto ($30 off at $19.99), cheaper Echo Dots, as well as discounts on an Amazon TV-powered Insignia 4K TV, Blink Mini devices and others.

Prime Day has also typically inspired a range of competitive sales, given that Amazon’s event would drive an increase in online shopping that benefitted other e-commerce retailers. As of March, as many as 37% of digital retailers said their Prime Day plans were up in the air because of coronavirus, but 56% said they still expected Prime Day sales would perform well, eMarketer noted.

So far, Target has planned a massive sale, Target Deal Days, to compete with Prime Day, which promises Black Friday-like discounts on hundreds of thousands of items on the same days that Prime Day runs. Walmart, on the other hand, said it would run its event starting earlier, on Sunday October 11, running through October 15.