Julio Vasconcellos Contributor
Julio Vasconcellos is the managing partner of Atlantico, a venture capital fund focused on Latin America. He was previously the founder of Canary and Peixe Urbano, and was Facebook’s first employee in Brazil.
More posts by this contributor

“Gradually, then suddenly.” Hemingway’s words succinctly capture the recent history of tech in Latin America. After more than a decade of gradual progress made through fits and starts, tech in Latin America finally hit its stride and has been growing at an accelerating pace in recent years.

The region now boasts 17 unicorns up from zero just three years ago. For the first time, the most valuable company in the region isn’t a state-controlled oil or mining behemoth, but rather e-commerce platform MercadoLibre.

We are only in the first chapter of this long story, however. When we compare the penetration of tech companies in Latin America to both developed and developing markets, we estimate that the market could grow nearly tenfold over the next decade. The value to be unlocked will be measured in trillions of dollars and the lives improved in the hundreds of millions.

Our venture capital fund, Atlantico, conducts a thorough annual analysis of market data from Latin America in what we call the Latin America Digital Transformation Report. The report consists of hundreds of data-rich slides based off of original studies, surveys and models constructed from a combination of public and proprietary data shared by many of the region’s leading tech companies. This year, for the first time, we have decided to make the report public and here we highlight some of the findings from this year.

Global venture capitalists, the likes of Sequoia, Benchmark and a16z have planted their flags through key investments in companies like Nubank, Wildlife and Loft. Those are not isolated incidents – venture capital investments in the region have nearly doubled annually for the last three years according to the Latin American Venture Capital Association (LAVCA). In order to understand what investors are seeing in the region, we analyzed the market through a simple framework we apply throughout our report.

The starting point for this framework is the socioeconomic foundation in place. The context in which transformation occurs is important in shaping its possible outcome. The same ingredients applied in different contexts and time periods will produce very different results. Thus, we believe that Latin America is unique globally, and the types of companies that will flourish (and to what extent) will be different than in other parts of the world. Trying to shoehorn foreign business models and products is unlikely to yield good results.

In the case of Latin America, it’s key to remember the region boasts a population twice that of the United States and a GDP half that of China’s (but similar on a per capita basis). In short: Latin America is big, a central factor that has the power to attract capital and talent. However, also critical to note is that economic inequality is severe. While a quarter of the region’s population lives in poverty, the wealthy in Mexico City and São Paulo enjoy living standards in line with their peers in New York and London.

This unique mix of large opportunity and critical problems waiting to be solved has provided fertile ground for the gig economy to flourish. Case-in-point: Brazil is Uber’s largest market globally in volume of rides, with São Paulo its largest city. Rappi, a major food delivery player in the region, valued at over $3 billion, grew its sales by 113% over the first five months of the pandemic. When taken together, the largest ride-hailing and food-delivery services in Brazil are already the largest private employer in Brazil, a formidable contribution to reducing high unemployment.

When we track technology company value as a percent of the economy (tech company market cap as a % of GDP) we clearly see that Latin America, at 2.2% penetration, has a ways to go. Our estimate is that it is 10 years behind China (at 27% penetration), which itself is five years behind current U.S. levels (39% penetration). 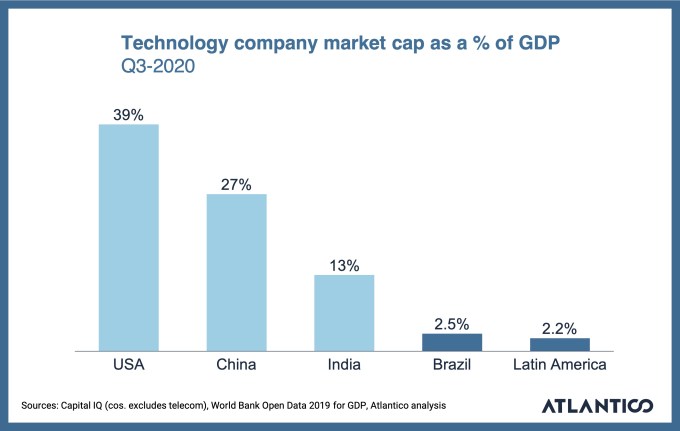 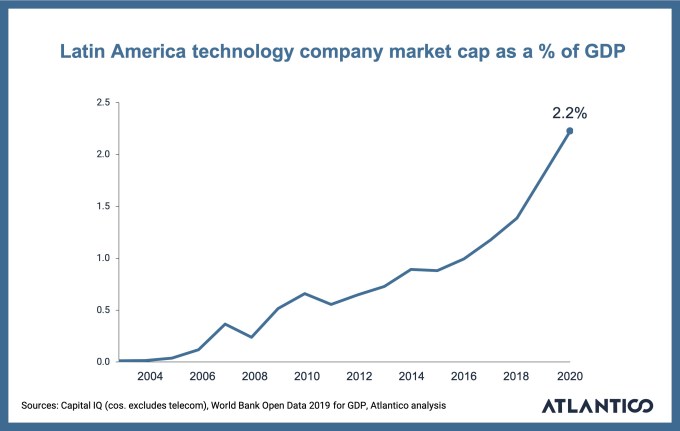 Within the socioeconomic context of the region, we advance to looking at the three drivers of change in our framework: people, capital and regulation.

On the people front, the greater visibility of successful role models has catalyzed a desire to follow entrepreneurial footsteps. People like Mike Krieger (co-founder of Instagram), Marcos Galperin (founder/CEO of Mercado Libre) and Henrique Dubugras (founder/co-CEO of Brex) have shown that local talent can go on to build global companies.

In a survey we conducted with nearly 1,700 college students from the top universities in Brazil, 26% of students voiced a desire to work at startups or big tech companies. A whopping 39% expressed plans to start a company in the future, that number rising to 60% when we consider only computer science students. As more and more of the region’s top graduates flock to tech, it gives us confidence in the accelerating growth of the sector over many years to come. 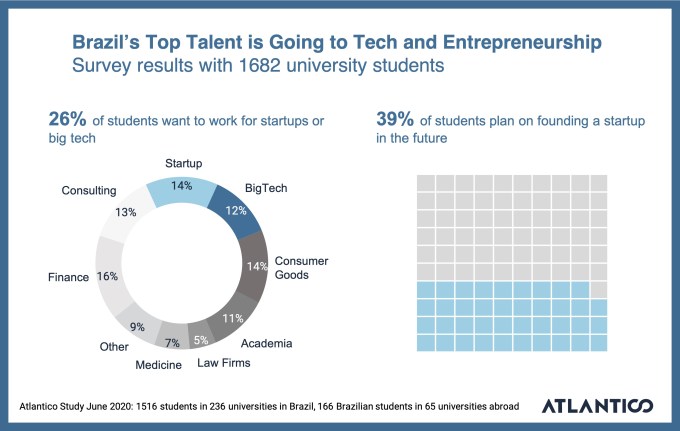 On the capital front, the growth of venture funding in the region has been frequently written about. Last year, it hit a peak of $4.6 billion after doubling from the year before. However, what perhaps is more surprising is that despite this rapid growth, we are still far from the ceiling. When we view venture capital investments as a proportion of GDP, we see Latin America as only one-seventh of the U.S. level and a quarter of the level in India.