The iOS 14 home screen customization trend is driving a new set of apps to the top of the App Store charts, and delivering record downloads for sources of inspiration, like Pinterest. According to new data from app store market intelligence firm Sensor Tower, installs of the top 20 home screen customization apps reached 5.7 million total downloads worldwide in the first four days following the release of iOS 14 on September 16.

[Update: While the original estimates focused on Sept. 17-20, the figures were calculated again in the days that followed. Sensor Tower then updated its report with the latest figures from September 17 to September 23. In the seven days following iOS 14’s launch, the top 20 home screen customization apps reached at least 13.7 million installs and more than $1 million in consumer spending from the App Store globally, it estimates. Widgetsmith, Color Widgets, and Photo Widget remained the top three apps, collectively generating more than 12.6 million installs in that period.]

Remarkably, the three most-downloaded apps — Widgetsmith, Color Widgets and Photo Widget — account for 95% of these 5.7 million downloads. That indicates that the rest of the app customization market today is much smaller. But this could still change over time if more apps embrace the trend and expand to include innovative and unique features.

Sensor Tower’s study on the home screen customization market only focused on those apps that were used to create home screen widgets or existed primarily to service them, like calendars, clocks, memos and others.

To determine if the app offered home screen customization tools, Sensor Tower analyzed the app metadata of all the apps that ranked at any point on the App Store after September 16, then manually reviewed those apps to confirm their functionality was home-screen-customization related.

The report’s focus was also more on widget apps, rather than apps that helped users make custom icons or existing apps that added widget functionality, as Sensor Tower decided it wouldn’t be able to determine how many had done so based on their metadata. It’s also difficult to determine, in some cases, if an app with a larger purpose beyond widgets is moving up the charts simply because it has now added widgets. 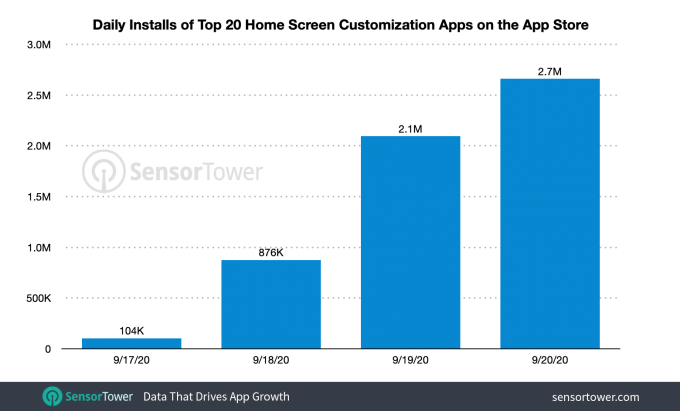 Combined, the group has generated a collective $400,000 in consumer spending in four days — from September 17 through September 20. Widgetsmith dominated the group, accounting for $370,000 of that total, followed by an app called Date Today with close to $20,000, per Sensor Tower estimates. (We should note Widgetsmith’s figure comes in a bit lower than some of the other estimates that were floating around.)

Though Sensor Tower’s study had a narrower focus, there are signals that plenty of apps have benefitted from the customization craze beyond the widget makers themselves.

Design inspiration resource Pinterest, as noted above, saw record daily downloads. TuneTrack, now the No. 18 free (nongame) app on the U.S. App Store appears to be gathering steam in the absence of an official Spotify widget. Its app offers both Apple Music and Spotify widgets for showing off favorite music on your home screen.

Meanwhile, design tool Procreate Pocket is now the No. 2 paid (nongame) app in the U.S., and PicsArt is the No. 31 free app. An app that simplifies icon changing, Icon Changer+, is No. 40 on the Top Free Apps charts in the U.S., followed by an app called Shortcuts, which is not the same Shortcuts app from Apple. (And surprisingly being allowed to use the same name!) 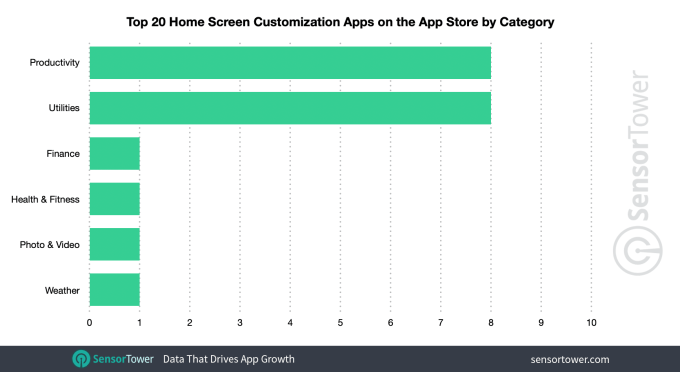 Because there’s not a specific category for home screen customization tools, some of the new apps can be found in the Productivity category, while others categorized themselves as Utility apps or something else entirely. This makes it more difficult for a consumer who wants to compare the rankings of all top apps offering home screen customization functionality in one place.

Given that iOS 14 has effectively created an entire new category of apps, it’s possible that Apple would consider adding a customization category to the App Store in the future, if the trend continues long term.

For now, however, Apple is addressing the discoverability issues with new App Store editorial content. A featured story on the App Store’s “Today” page, for example, is titled “How to Set Up Widgets,” and recommends a number of apps that have added widgets — like Todoist, Carrot Weather, Timepage, Apollo, Spark Mail and others, in addition to Widgetsmith.

What’s unfortunate is that Apple didn’t give its developer community enough time to prepare for launch day. The company announced iOS 14’s release with less than 24 hours’ notice and without the final version of Xcode available to developers. As a result, when users began to customize their home screens, they may not have found all the widgets they would have wanted.