The excitement around the ability to customize your iPhone home screen following the release of iOS 14 has been paying off for Pinterest. According to new third-party estimates, Pinterest’s app has seen record global daily downloads and a swift climb up the App Store’s Top Charts as users sought out iPhone design inspiration — like photos to use for custom icons or wallpapers to match their new widgets, for example.

App store intelligence firm Apptopia was the first to note the impact of the iOS 14 customization trend on Pinterest’s downloads. According to its data, Pinterest saw a record high number of daily downloads on September 21 when it recorded approximately 616,000 new installs worldwide.

Another third-party estimate, however, found Pinterest’s daily download record was actually broken the day before. 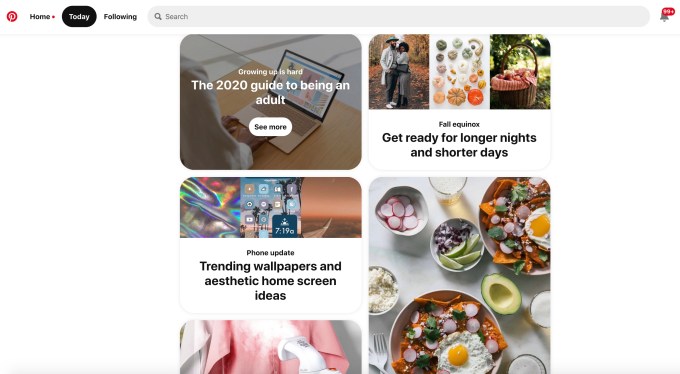 App store market intelligence firm Sensor Tower nears Apptopia’s estimate for September 21, as it recorded approximately 680,000 global installs across both iOS and Android, instead of 616,000.

But Sensor Tower data shows that Pinterest actually broke the record for the most daily downloads ever on September 20. (Or, at least, this was the most since January 2014, which is when Sensor Tower began tracking app download data.)

On September 20, the firm estimates that Pinterest’s app generated around 800,000 installs across iOS and Android on a global basis. That represents 32% week-over-week growth from the 607,000 installs it saw on September 13 — a few days before the worldwide release of Apple’s new mobile operating system, iOS 14.

In addition, Pinterest swiftly climbed up from No. 47 on the top free iPhone charts in the U.S. on Friday, September 18 to No. 7 on Sunday, September 20. It then climbed up even further to No. 6 on Monday, September 21 — a figure that agrees with Apptopia’s data. The app may have briefly hit the No. 1 position, as well, but not long enough to be recorded as the No. 1 app for the day.

Pinterest is also now No. 1 in the Lifestyle category on the iPhone, though it has regularly taken either a No. 1 or No. 2 position in this category as of February 4, 2020, Sensor Tower also noted.

The Pinterest home page today showcases iPhone design trends as one of its “Daily Inspirations,” where the collection “Trending wallpapers and aesthetic homescreen ideas” is currently sitting at the top of the page. Here, users are finding iPhone backgrounds and sharing other custom designs and icon sets for people to use in their own creations.

The iOS 14 update has had a large impact on the app ecosystem, as it finally delivered a feature Android users have had for years: home screen widgets.

In combination with the new iOS App Library that lets you hide away less frequently used apps, the iOS update has managed to tap into what was clearly pent-up consumer demand for being able to personalize the iPhone interface to their own tastes and interests. Also, iPhone users are now taking advantage of Apple’s Shortcuts app to create custom icons — although this is more of a hack, as the process isn’t really replacing the icon itself, but rather creating a shortcut to launch the app instead.

This redesign trend hasn’t only impacted Pinterest. User demand for new widgets and creative tools is now playing out across the iPhone App Store and its Top Charts.

Okay but with the new ios release I can finally utilize my dnd pinterest boards. The question is, which character? 🤔

ios home screen layout gives me more reasons to get on pinterest.

Currently, for example, the top three positions on the U.S. App Store’s Top Free Charts are held by widget-making applications: Widgetsmith, Color Widgets and Photo Widget, respectively. Pinterest has moved up to No. 5 as of the time of writing, and is followed by Motivation – Daily Quotes, another app gaining downloads for its widgets. Meanwhile, an app called Tune Track, an early adopter of widgets, has now found itself in the No. 8 position, as well. Even the Top Paid Charts are feeling the influence, as a Photo Widget is No. 1 and the creative design tool Procreate Pocket is No. 2.

Whether design tools will continue to reign remains to be seen. Some people are frustrated by the way Shortcuts are launched — it first redirects to the Shortcuts app, then launches the app in question. If Apple were to endorse the redesign trend, it would do away with this intermediary step to make custom shortcuts more useful.

everyone turned their home screen into a pinterest board

Pinterest could not comment on the app download figures, but it confirmed the download spike isn’t attributable to a paid user acquisition campaign at this time. Instead, the company says it’s seeing organic increases in both downloads and iOS 14-related searches.

“There has been an increase in searches for iOS 14 wallpapers and home screen design this week by Gen Z users, a demographic group that grew 50% year-over-year in June 2020,” a Pinterest spokesperson told TechCrunch. “These Pinners often use Pinterest as a resource for aesthetic inspiration and decorating offline spaces like bedrooms, so it’s interesting to see them seek inspiration for their online spaces, too,” they added.