Unsurprisingly, Teams has become a major focus for Microsoft during the COVID-19 pandemic, so it’s no surprise that the company is using its annual Ignite IT conference to announce a number of new features for the service.

Together Mode, which puts cutouts of meeting participants in different settings, is getting a bit of an update today with the launch of new scenes: auditoriums, coffee shops and conference rooms. Like before, the presenter chooses the scene, but what’s new now is that Microsoft is also using machine learning to ensure that participants are automatically centered in their virtual chairs, making the whole scene look just a little bit more natural (and despite what Microsoft’s research shows, I can never help but think that this all looks a bit goofy, maybe because it reminds me of the opening credits of The Muppet Show).

Also new in Teams is custom layouts, which allow presenters to customize how their presentations — and their own video feeds — appear. With this, a presenter can superimpose her own video image over the presentation, for example.

Breakout rooms, a feature that is getting a lot of use in Zoom these days, is now also coming to Teams. Microsoft calls it the most requested feature in Teams and, like in similar products, it allows meeting organizers to split participants into smaller groups — and the meeting organizer can then go from room to room. Unsurprisingly, this feature is especially popular with teachers, though companies, too, often use it to facilitate brainstorming sessions, for example.

After exhausting all your brainstorming power in those breakout rooms and finishing up your meeting, Teams can now also send you an automatic recap of a meeting that includes a recording, transcript, shared files and more. These recaps will automatically appear on your Outlook calendar. In the future, Microsoft will also enable the ability to automatically store these recordings on SharePoint.

For companies that regularly host large meetings, Microsoft will launch support for up to 1,000 participants in the near future. Attendees in these meetings will get the full Teams experience, Microsoft promises. Later, Microsoft will also enable view-only meetings for up to 20,000 participants. Both of these features will become available as part of a new “Advanced Communications” plan, which is probably no surprise, given how much bandwidth and compute power it will likely take to manage a 1,000-person meeting. 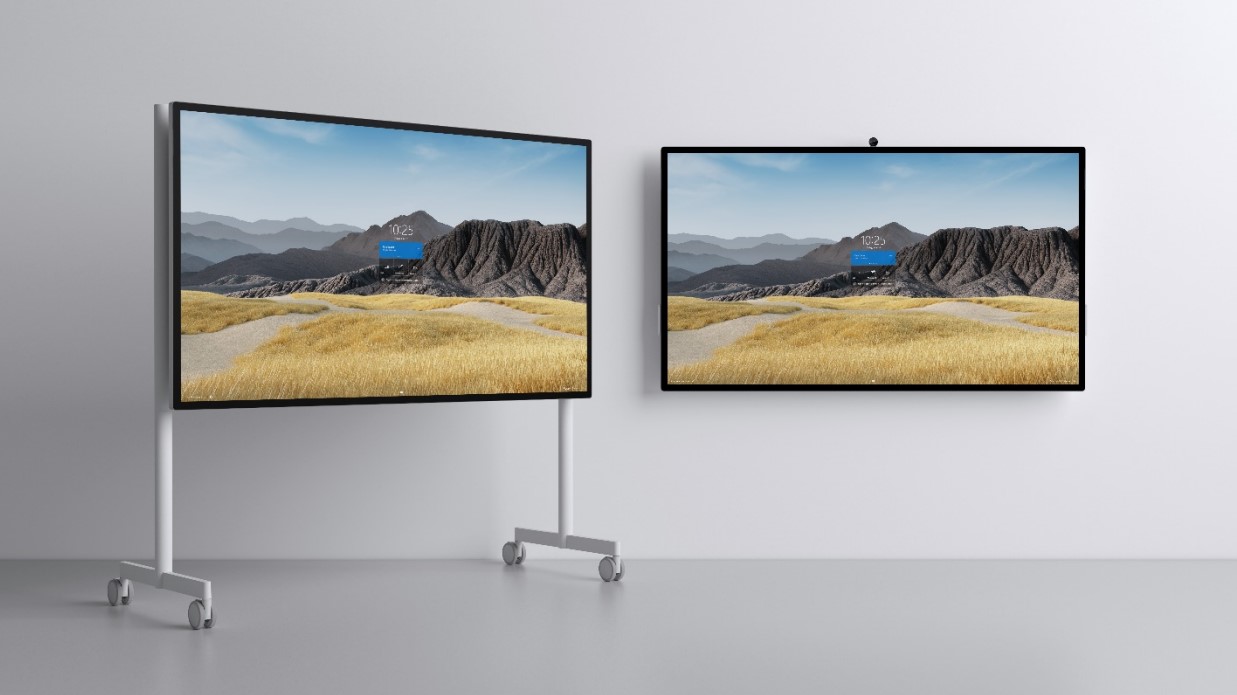 Microsoft also made two hardware announcements related to Teams today. The first is the launch of what it calls “Microsoft Teams panels,” which are essentially small tablets that businesses can put outside of their meeting rooms for wayfinding. One cool feature here — especially as businesses start planning their post-pandemic office strategy — is that these devices will be able to use information from the cameras in the room to count how many people are attending a meeting in person and then show remaining room capacity, for example.

The company also today announced that the giant Surface Hub 2S 85-inch model will be available in January 2021.

And there is more. Microsoft is also launching new Teams features for front-line workers to help schedule shifts, alert workers when they are using Teams off-shift and praise badges that enable organizations to recognize workers (though those workers would probably prefer hard cash over a digital badge).

Also new is an integration between Teams and RealWear head-mounted devices for remote collaboration and a new Walkie Talkie app for Android.

And since digital badges aren’t usually enough to improve employee well-being, Microsoft is also adding a new set of well-being features to Teams. These provide users with personalized recommendations to help change habits and improve well-being and productivity. 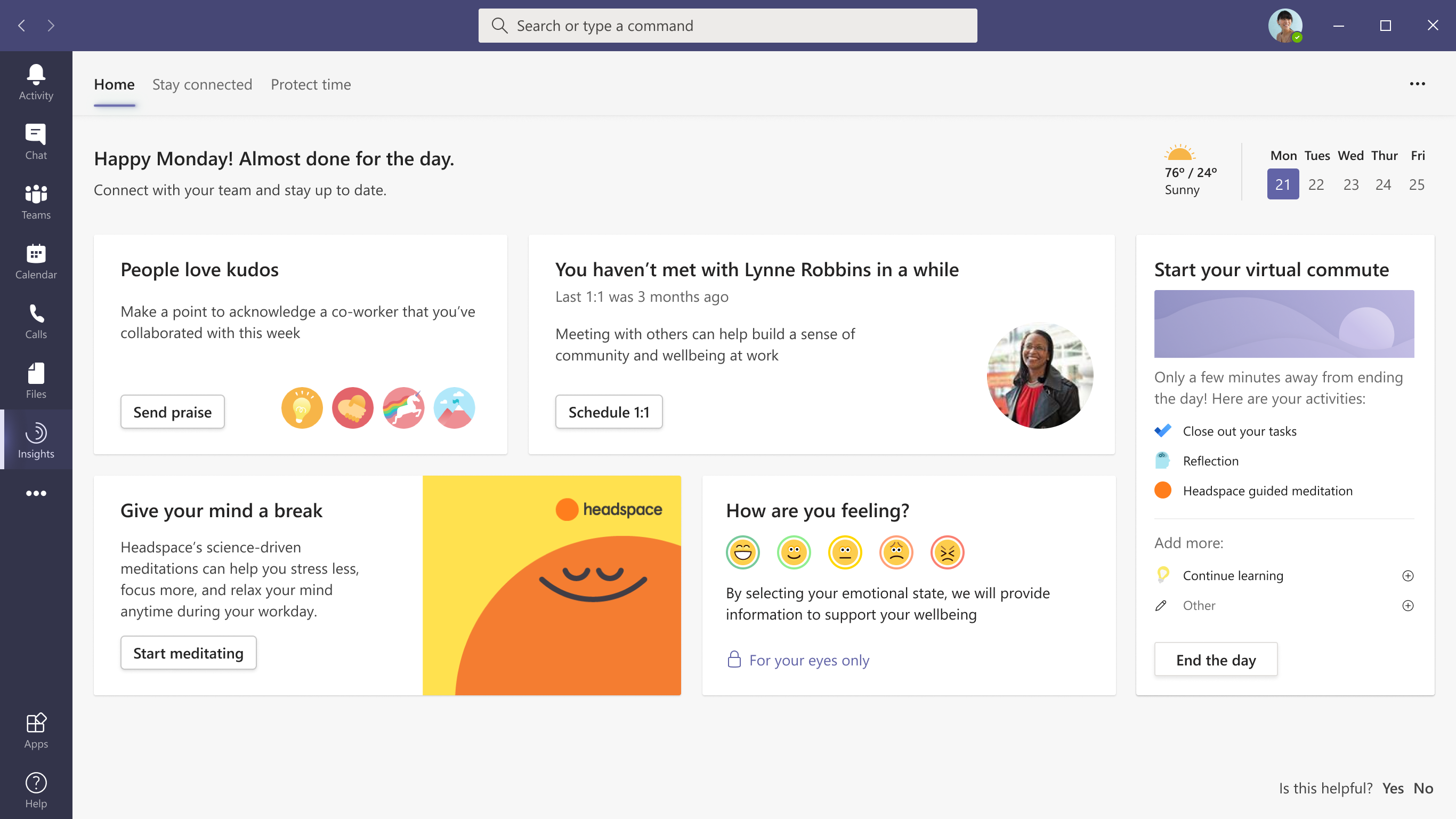 That includes a new “virtual commute” feature that includes an integration with Headspace and an emotional check-in experience.

I’ve always been a fan of short and manageable commutes for getting some distance between work and home, but that’s not exactly a thing right now. Maybe Headspace works as an example, but there’s only so much Andy Puddicombe I can take. Still, I think I’ll keep my emotional check-ins to myself, though Microsoft obviously notes that it will keep all of that information private.

And while businesses now care about your emotional well-being (because it’s closely related to your productivity), managers mostly care about the work you get done. For them, Workplace Analytics is coming to Teams, giving “managers line of sight into teamwork norms like after-hours collaboration, focus time, meeting effectiveness, and cross-company connections. These will then be compared to averages among similar teams to provide managers with actionable insights.”

If that doesn’t make your manager happy, what will? Maybe a digital praise badge?