Video meetings. While the move to remote work during the COVID-19 pandemic may have made them mainstream, they are not without issues and more and more people are now opting out. For good reason. As it turns out, it’s really hard for our brains to sustain concentration while we’re trying to focus on 20 people in neat squares, all with different backgrounds and never quite looking at the camera. While we’ve had quite a bit of anecdotal evidence for this, Microsoft today released some of the research it did in this area, as well as new features in Teams that it hopes will make video meetings easier and less tiring.

The first of these is Together mode. The idea here is actually pretty simple. To be able to change backgrounds or add background blur, Teams already features Microsoft’s AI segmentation technology to detect and cut out a participant’s image from the background. Now, with Together Mode, it is taking everybody’s images and putting them into a shared space, starting with an auditorium. So instead of lots of little squares, all of the meeting participants now sit in this auditorium. This, Microsoft’s research shows, is actually quite a bit easier on the brain to process than standard remote collaboration tools.

“In our preliminary research — and it’s only been preliminary thus far, this has only been around for a couple of months — we’ve noticed quite a few things,” Microsoft’s Marissa Salazar explained to me ahead of today’s announcement. “First and foremost, you’ll notice the way that we’re looking at each other is obviously very different than something we’re used to, not only are we out of the grid, but we’re looking at this, ‘mirror image’ of ourselves.” This view of ourselves, Microsoft argues, is something we’re quite used to from being at the barbershop, for example, where we talk to the mirror. This also tricks our brain into mitigating some of the eye contact problems we’ve all experienced in video meetings. 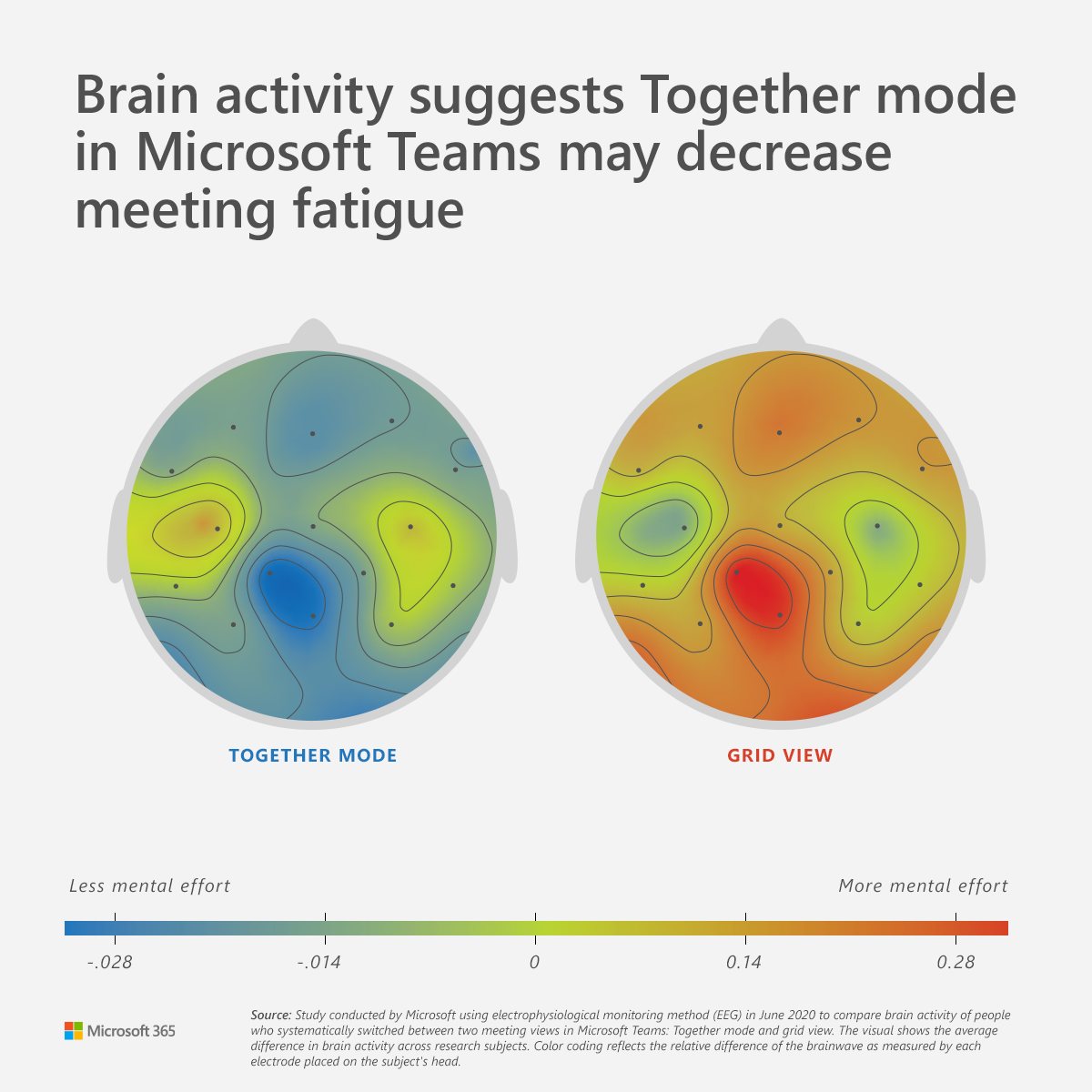 “Our research has also shown that people tend to be happier, be more engaged in meetings, feel more comfortable keeping their camera on longer — even if they’re not asked to in this mode. And then — I think most importantly — be able to pick up on the behavioral social cues that are so important to human interaction,” said Salazar.

Michael Bohan, a director in Microsoft’s Human Factors Engineering group, noted that just removing the grid view already makes a major difference here. “When you have a grid view, everybody’s boxed off and so your brain has to treat those as individual parts — it has to parse all information. When you remove those edges, then your brain can start to see a more unified view of things.”

For now, Together Mode only features the auditorium view, which can handle up to 49 participants, but Microsoft is already working on other views, including a more intimate coffee shop mode.

The other new mode Microsoft is introducing is Dynamic view. The idea here is that Together Mode is obviously not perfect for every kind of meeting, so this view provides more control over how you see shared content and the other participants in a meeting, including the ability to see content and specific participants side-by-side.

Also new in this update are video filters, to tweak your lighting levels, for example, and soon, Teams will add live reactions, which let you share your sentiment with emojis without interrupting the meeting. Coming soon, too, are PowerPoint Live Presentations to Teams, chat bubbles so you don’t have to keep a separate chat view open, and speaker attribution and translation for live captions and transcripts. For chats in teams, Microsoft is introducing Gmail-like suggested replies.

And since Cortana still lives, she is also now coming to the Teams mobile app to help you make calls, join meetings and more. 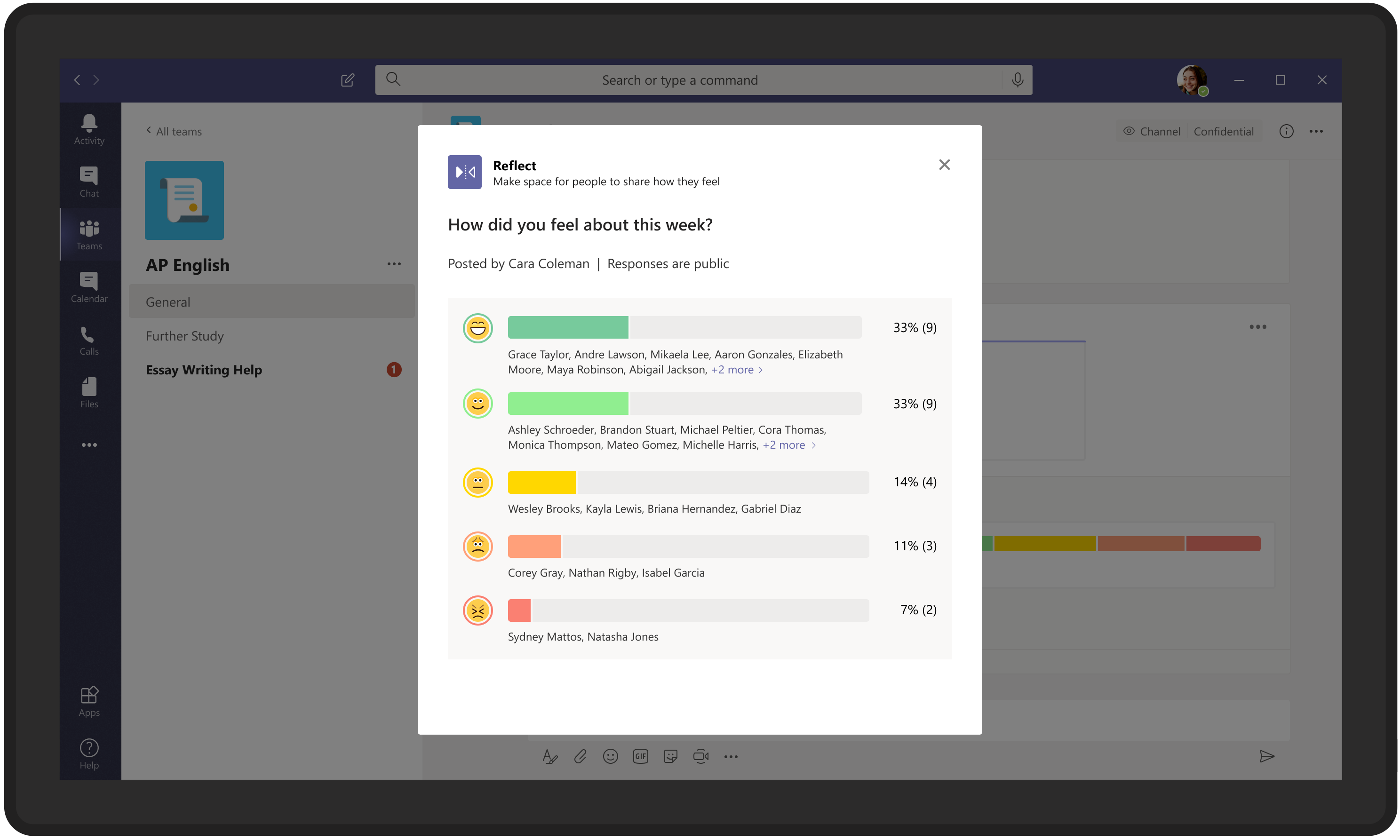 Another new feature Microsoft CVP Jared Spataro stressed when I talked to him ahead of today’s announcement was the new Reflect messaging extension. “This allows you to have a manager check in on the well-being of your team,” he explained. “You can do that anonymously or publicly. We’ve already been doing some of that on my team — just trying to check in with people — and this gives you a more structured way to do that. I think it’ll be really well-received based on what I’m talking about with customers because this well-being component is becoming very important.”