President Trump’s recent suggestion that North Carolina voters should cast multiple ballots has run afoul of Twitter’s election integrity rules. In a series of tweets Thursday morning, the president elaborated on previous statements in which he encouraged Americans to vote twice to “check” vote-by-mail systems.

Trump made the initial comments in a local television interview Wednesday. “They will vote and then they are going to have to check their vote by going to the poll and voting that way because if it tabulates then they won’t be able to do that,” Trump said.

“So let them send it in, and let them go vote. And if the system is as good as they say it is, then they obviously won’t be able to vote.” 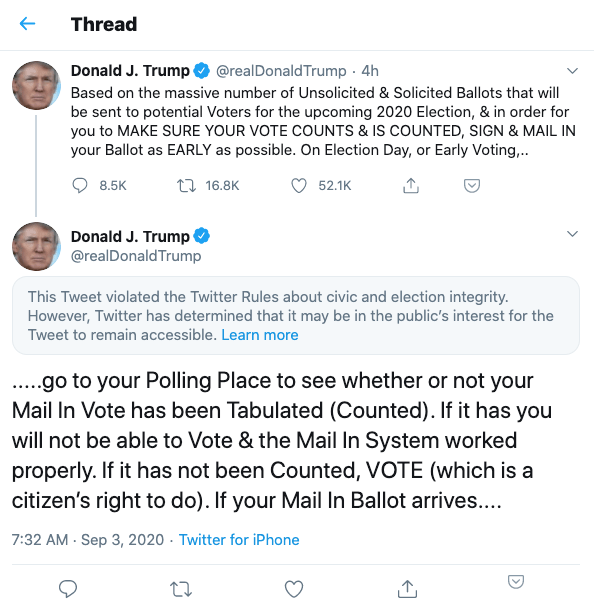 Twitter added a “public interest notice” to two tweets related to those comments Thursday, citing its rules around civic and election integrity. The tweets violated the rules “specifically for encouraging people to engage in a behavior that could undermine the integrity of their individual vote,” according to Twitter spokesperson Nick Pacilio. Twitter has limited the reach of those tweets and restricted its likes, replies and retweets without comment.

Trump’s latest attack on vote-by-mail also crossed a line for Facebook. The company will remove any video of Trump’s recent voting comments that are shared without context or those that support the president’s statements, though it has yet to identify any so far.

“This video violates our policies prohibiting voter fraud and we will remove it unless it is shared to correct the record,” Facebook Policy Communications Director Andy Stone said.

Facebook added its own fact-checking notice to the same statement that Twitter deemed in violation of that platform’s rules. Now, a label at the bottom of Trump’s Facebook post contradicts the president’s suggestion that Americans try to vote twice to make sure “the mail in system worked properly.” 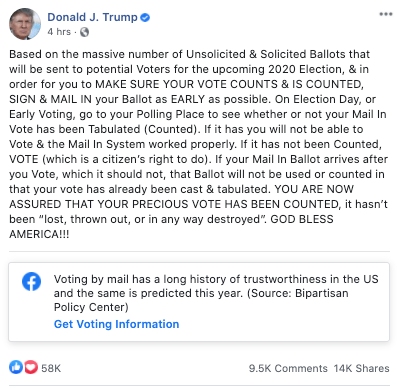 The fact-checking label, which reads “Voting by mail has a long history of trustworthiness in the US and the same is predicted this year,” is more specific than the generic voting info label the platform attaches to other election-related content.

The president’s comments were his latest attempt to cast doubt on the vote-by-mail systems that the U.S. will rely on in November’s election. In recent months, Trump has made many unfounded or outright false claims criticizing the safety of mail-in voting, a system that the U.S. already relies on for absentee voting. As November gets closer, those claims have voting rights organizations concerned.

“While this is a step in the right direction, the fact remains that Facebook refuses to enforce its own Terms of Use where Donald Trump is concerned,” VoteAmerica founder Debra Cleaver said.

“Yesterday, Trump outright urged voters in North Carolina to commit voter fraud. This is part of a larger and dangerous pattern of Trump using social media and other platforms to distribute disinformation, with what appears to be the goal of undermining faith in US elections.”

While the COVID-19 crisis means that more Americans than ever will be using mail-in voting to cast a ballot, the voting method is widely regarded as safe and reliable by experts.

In response to Trump’s remarks, North Carolina’s Board of Elections issued a statement clarifying that voting twice is a Class I felony in the state.

“It is illegal to vote twice in an election,” said Karen Brinson Bell, executive director of the North Carolina State Board of Elections.

“… Attempting to vote twice in an election or soliciting someone to do so also is a violation of North Carolina law.”