If you mashup feel-good summer music, ridiculous 80s-inspired imagery and retro tech, you’ll get the lighthearted and fun web radio service Poolside.fm, the so-called “sunniest place on the internet.” The website where you can stream beachy, chill or disco tracks in a classic MacOS-like space relaunched last year to bring a little joy back to the internet. More recently, the team delivered a Mac app that somehow successfully mixes together the Mac aesthetic with touches of early Windows. Today, the Poolside.fm iOS app has arrived, this time taking inspiration from old Nokia 3310 mobile devices.

The Poolside.fm project actually began back in 2014, when founder and serial entrepreneur Marty Bell was in search of some sort of virtual getaway. Bell lives in the Highlands of Scotland, where it’s often gray and rainy, he says. And that can be depressing. As an escape, Bell began listening to a certain type of uplifting, happy music via SoundCloud. He decided it would be fun to have those tunes in a playful environment that also reminded him of his other “happy place” — “80s beach movies on VHS, where it’s like the American summer dream,” Bell explains.

He then teamed up with developer Grant MacLennan to launch the initial version of the Poolside.fm website, then called Poolside Radio, in 2014. It received a handful of accolades and briefly went viral on Twitter, developing a small cult following.

The site initially ran on a rudimentary CMS (content management system), where Bell could submit SoundCloud tracks and YouTube videos which would then be played at random for visitors. 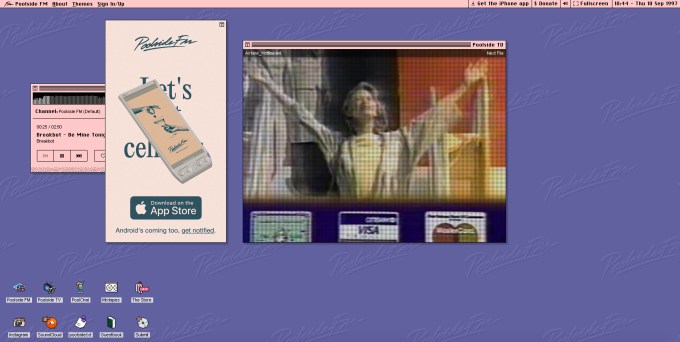 Over the years, Bell continued to work on his other business endeavors, which ranged from a DJ business with a clothing line to a sunglasses company and, later, a finance company called Nude, which helps young people save up for their first home. Though he continued to update Poolside.fm’s Instagram, the website for the radio service wasn’t updated for years. Despite the inattention, it continued to see thousands and, sometimes, tens of thousands of visitors per month.

Bell more recently returned to the project with the idea to reinvent the website with an operating system-like look-and-feel, and even paid people to do three different versions of the site until he found the right team. Unbelievably, the team working on the project now do so on a volunteer basis in their free time because they find it to be a positive experience. (And perhaps because they see long-term potential in the Poolside.fm brand.)

Visitors who go to Poolside.fm can switch through various “stations,” each with their own vibe. The default, Poolsdie.fm, features the upbeat music that prompted the project in the first place. But there’s also an indie channel, Indie Summer; a chill channel, Hangover Club; and fast-tempo disco, Tokyo Disco. 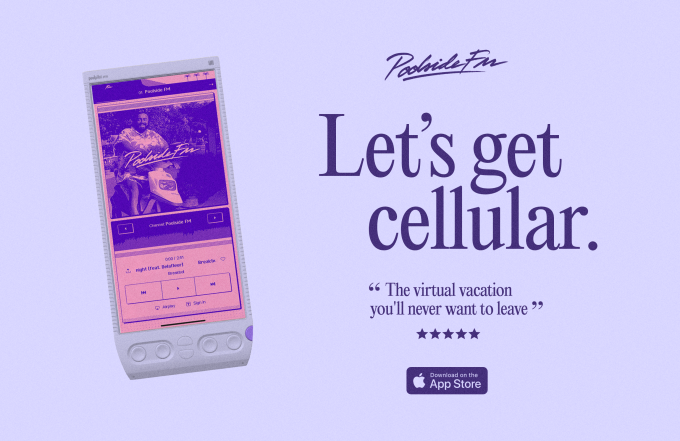 Since last summer’s relaunch, the updated website has seen 1.5 million listening sessions from more than 900,000 individuals, with much of the listening taking place across the U.S. (32%), Japan (15%), U.K. (8%), Germany (4%) and Canada (4%). Meanwhile, the recently launched Mac app has already been installed 30,000 times across the past three weeks and was featured by Apple in the “Apps We Love” section of the Mac App Store.

But instead of copying the user interface from the web, the Poolside.fm team created something new.

The iOS app, built by developer Josh McMillan, references older cellular devices — like the Nokia 3310, which once featured a grainy, pixel-y image of hands coming together and shaking. On Poolside.fm’s app start screen, however, a similar set of hands now drop a cherry in a martini glass. 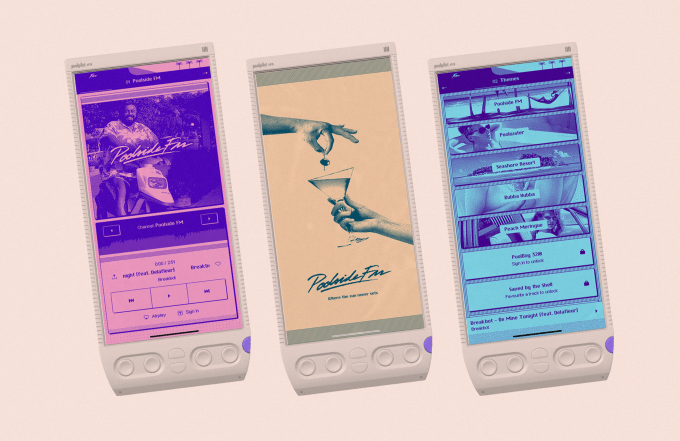 But the app isn’t the classic gray-and-green color scheme of old phones. It’s a bright and cheery pink. You also can opt for other jewel-toned shades in a theme picker, if you prefer.

The app includes Poolside.fm’s full channel lineup, which you can play, pause, skip or go back, and favorite, if signed in. And despite its old-school feel, Poolside.fm is a modern app with support for things like background play, AirPlay, and the ability to work with your AirPods. 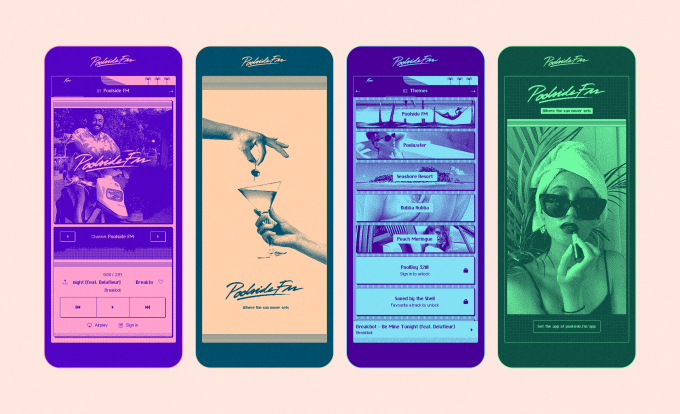 “The bills are like, I don’t know, I would say for both Firebase and the hosting, the whole thing is probably under $100 per month,” he guesses. That’s because the video and audio come from YouTube and SoundCloud, which handle the bandwidth load. The actual service itself is very light.

Though Bell says investors have been sliding into his Twitter DMs, the team isn’t looking to immediately monetize their project. It’s funny, he adds, how the one business (of so many that he started) that wasn’t designed to be a success — the one with no business plan, in fact — has ended up attracting the most attention.

“I think that’s what makes the difference. When you’re just channeling pure passion into something, with a bunch of other people that are working on it because it’s fun — not because they’re being paid — the kind of product that comes out of that is unlike anything that’s going to come out of a product that’s working towards KPIs and metrics for investors,” explains Bell. “In that environment, you can’t build something like Poolside.fm, where it’s six people who are all working on it in their spare time, for free, because it’s their happy place and it’s fun to work on. You can’t get that energy in a business environment very easily,” he says.

That said, Bell does have a few ideas about where the project could go in the future.

The team already sold a little merchandise, like hats and tees. (He’s still packing up Poolside.fm’s motel-style keychains from his house, he says.) Bell could see the team running projects from a separate company, as “Poolside.fm presents X,” for example.

Post-COVID, these could include experiential events. But Bell is also talking to podcast studios about doing a fiction podcast series, and the team is thinking about selling more physical products — like pool accessories, naturally.

Of course, we had to ask if Bell finally now has a pool of his own, after all these years. But he hasn’t taken that victory lap just yet.

“I definitely do not have a pool in the Highlands of Scotland. I’m looking out onto a field full of sheep right now,” he laughs.