Apple is expanding its investment in podcasts. Today, Apple Books and Oprah announced the launch of “Oprah’s Book Club” podcast, an eight-episode series that will explore themes related to Oprah’s Book Club pick and bestseller, “Caste: The Origins of Our Discontents,” by Pulitzer Prize-winning journalist and author Isabel Wilkerson. The podcast is the first to cross over from Apple’s streaming TV service, Apple TV+.

Earlier this year, Bloomberg had reported Apple was looking to make original podcasts related to programs on Apple TV+. These podcasts would serve as companions to Apple TV+ content, helping to market Apple’s growing slate of Apple TV+ originals.

Other podcasts were also in development, later reports had claimed. In an interview with Forbes, for instance, an executive producer of the Apple TV+ anthology series “Little America,” Lee Eisenberg, had said the show would have its own podcast as well. But that one hasn’t yet launched.

Apple declined to talk about any other podcasting efforts.

“Oprah’s Book Club,” however, would make for an obvious start for any expansions on this front. 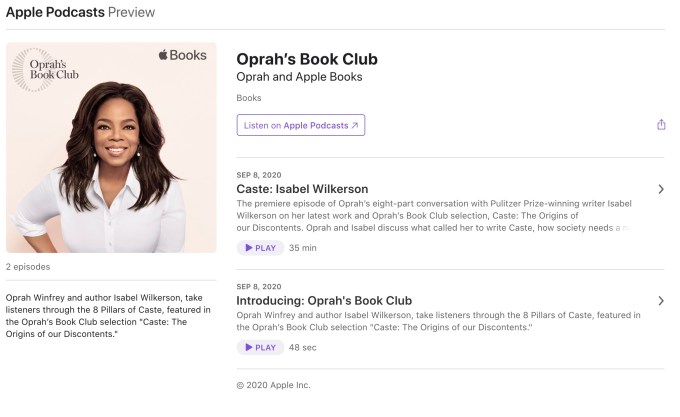 Today, Apple already streams the “Oprah’s Book Club” series on Apple TV+. The company also has a number of ways to cross-market Book Club content. In addition to the new podcast series, for example, customers can also buy Oprah’s book selections on Apple Books, access a discussion guide for the book on Apple Books, and read and listen to an exclusive excerpt from “Caste” on Apple News, among other things. Apple Music Radio (formerly Beats 1) also features an author interview.

The premiere episode of the new podcast will focus on a conversation where Wilkerson talks about what inspired her to write “Caste” and how she believes society needs a new way to talk about racism, Apple says. Subsequent episodes will focus on specific pillars of caste, as described in her book. The new episodes will be released twice weekly on Tuesdays and Thursdays, starting today.

Apple so far has only made limited investments in podcasting, compared with the sizable efforts from rivals like Spotify, Pandora and Amazon. Spotify has hundreds of originals and exclusives available to its users. It also acquired several podcast networks and podcast startups, including Gimlet, Parcast, Anchor and The Ringer.

Pandora, meanwhile, tapped into parent company SiriusXM’s assets to turn its talk shows into podcasts and developed a new podcast-and-music format, Pandora Stories. Amazon wraps in a premium collection of Audible podcasts with a Prime membership.

Apple, on the other hand, releases more standard corporate fare as podcasts, like its Apple Keynotes and quarterly earnings call. Apple Retail had previously offered podcast-focused events at the Apple Store, but these are no longer updated. Apple News produces “Apple News Today,” and Apple Music produces “The Zane Lowe Interview Series” and “Songs for Life,” which also stream on Apple Music.

Apple Books, however, is the partner producer on the Oprah podcast, not Apple TV+, so this one may not “officially” count as the first Apple TV+ companion series, we should note.

Unlike Spotify’s efforts, Apple’s podcasts are truly podcasts. That is, they’re made available for free on Apple Podcasts and can be added to any other podcast listening app via RSS, as the podcast format requires.