When people in the U.S. or Europe think of crowdfunding and medical expenses, sites like GoFundMe, where people fundraise around specific predicaments, come to mind. But today comes news of how another approach — a platform based around crowdfunding and mutual aid that pays out when its members fall into medical dire straits — is picking up some significant steam in its growth, and its financial backing.

Waterdrop, which goes by Shuidihuzhu in China (translated as “water drop mutual help”), today said that it has raised $230 million in a new round of funding jointly led by two strategic investors, the insurance giant Swiss Re and returning investor Tencent, whose WeChat platform is used to sign up users and buy products using a quick QR code scheme. 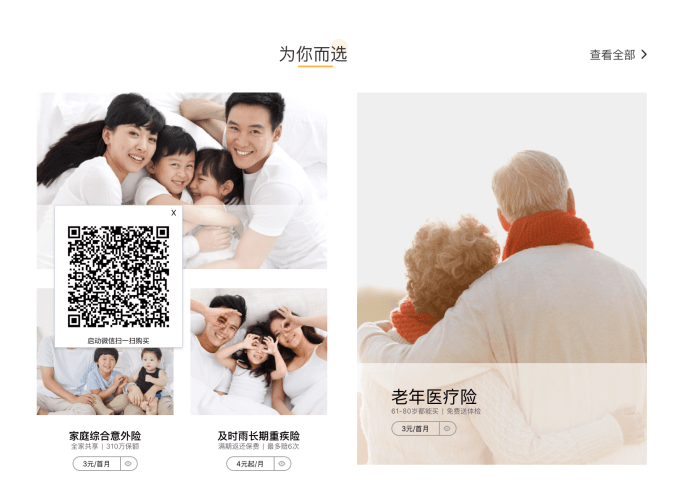 Previous investors IDG Capital and Wisdom Choice Global Fund also participated in the Series D. The startup is not disclosing its valuation, but when the round had partially closed at $200 million earlier this month, PitchBook noted that its pre-money valuation was $1.8 billion, which puts the valuation now at just over $2 billion.

This may also mean that plans for an IPO that were reported in July are being put off for the moment. Update: Indeed, a Waterdrop spokesperson responded a day later to state: “The company currently has no IPO plan or timeline.”

Previous to this, Waterdrop had raised about $252 million, including a $145 million Series C in June 2019. It has a longer list of previous backers that also include Yuri Milner, ZhenFund and Boyu Capital, the VC firm co-founded by the grandson of former long-time Chinese president Jiang Zemin, a link that underscores the power structure that exists around tech funding and the businesses that are given the financial engine to grow.

This latest round of funding will be used not just to keep growing the platform, but incorporating partnerships with others in the healthcare ecosystem, from pharmaceutical companies and insurance businesses, through to hospitals and pharmacies, and other clinical care facilities, in part by way of a new service called Haoyaofu, to provide members with lower-cost medications and treatments.

Waterdrop has also been looking at how it can get more involved in facilitating other services such as medical consultations and providing overseas medical treatment, as well as cancer screening and routine exams, preventative cornerstones of how many insurers operate today.

“We are excited about the huge growth potential that lies ahead of us. Our long-term goal is to become a leading online healthcare platform in China with an ecosystem that includes insurers, pharmaceutical companies, hospitals and drug stores, as well as nursing institutions and rehabilitation institutions,” said Peng Shen, founder and CEO of Waterdrop, in a statement. “We are committed to not only helping users with financing issues but also providing them with integrated healthcare services along the way.”

Beijing-based Waterdrop noted that this is Swiss Re’s first investment into an insurance startup in China, and the largest private fundraise for an insurtech company so far this year in any market, which it says was spurred in part by the global surge not just in the attention that healthcare is getting as a result of the coronavirus health pandemic, but the push toward better tech-based solutions to meet a new set of demands across the ecosystem, from healthcare providers through to those working on medicines and other innovations, through to the needs of patients.

“As a leading online insurtech company, Waterdrop is well-positioned to tackle the pain points of traditional insurance and pave the way for future breakthroughs in the industry, such as the accelerated technological innovation and digitalization of the industry worldwide that we have witnessed during the COVID-19 situation,” said Ning Zhou, head of principal investment and acquisition for Asia for Swiss Re.

Indeed, the same uncertainty that COVID-19 has brought to many industries has ironically been a boost for insurance startups. Lemonade, the U.S.-based insurance tech startup, raised more in its IPO, $319 million and currently has a market cap of $3.5 billion.

The “water drop” reference in the startup’s name comes from the basic premise behind the business model, requiring low buy-in (i.e. just a drop of water) from its customers.

One part of the Waterdrop business — which today is live only in China, with a beta version of an international site launched in April 2019 — focuses on mutual aid for medical conditions. In one part, users contribute very incremental amounts money, starting as low as half a cent, toward a mutual aid scheme, where Waterdrop then pays out up to 300,000 yuan (about $43,000) when members unexpectedly find themselves struck with a major medical setback.

The other part of that business focuses on mutual aid for those who suffer an accident that results in a permanent disability or death, which pays out up to 100,000 yuan ($14,500) in these cases.

Those sums may not sound like much, but in a country where some 600 million people earn as little as only 1,000 yuan ($144) each month, these can be significant sums, either in place of having other more costly insurance programs, or as a complement to these. (The average monthly per capita income, it should be noted, is much higher, at 30,000 yuan.)

Another part of the business focuses on more traditional health insurance services, with monthly payments again starting at low amounts of money, such as a long-term serious health insurance that starts at 4 yuan ($0.58) per month.

A third part is a more traditional crowdfunding platform for healthcare costs.

Waterdrop has not been without bumps, as you would expect. An exposé in December unveiled how employees, under pressure to meet aggressive growth targets, were cutting due diligence corners in sign-ups and in some cases lying on application forms. (The company in response said it fired the team responsible and worked to put in place better measures to block things like this from happening again.)

It has also built public lists to name and shame those who have tried to scam others on its crowdfunding platform, which points to a persistent problem of that also getting abused.

Despite that, all together, the Waterdrop businesses have seen a lot of growth.

The Insurance Mall now has 120 million unique insurance enrollees, with a written premium of US$865 million in the first half of 2020, which is close to the total written premium for full year 2019 (essentially saying business has doubled to date). For the full year 2020, Waterdrop Insurance Mall expects to record a total written premium of $2.0 billion, or more than 100% year-on-year growth, with a total earned premium of $865 million, or 300% year-on-year growth. Waterdrop Crowdfunding, meanwhile, has raised $4.6 billion from 320 million unique users over 1 billion+ donations as of the end of July 2020. And Waterdrop Mutual has paid out $233 million to 12,819 families so far.

The Swiss Re investment is significant not only for the funding itself, but because Waterdrop is not alone in the market, with another major competitor backed by Alibaba called Xiang Hu Bao (which translates less prosaically and simply as “mutual protection”) that is hot on its heels for growth.

“We will continue to build on our solid partnership with Waterdrop and together we will support the ongoing development of the insurance industry and promote digital innovation,” said Russell Higginbotham, CEO Reinsurance Asia and Regional President, Swiss Re, in a statement.

For investor Tencent, having a significant stake in a healthcare company that ties in its services with its WeChat messaging platform is one way to continue to have leverage in this growing area against one of its big rivals in the country.

“Amid the rapid expansion of the Chinese commercial health insurance market, Waterdrop has seized the market opportunity very well and used the power of technological innovation to help tens of millions of families,” said Yu Haiyang, MD of Tencent Investment, in a statement. “Tencent continues to be a long-term supporter of Waterdrop and will help it build an even better user experience.”