Funding for fintech startups shrank 87.6 percent year-over-year to $192.1 million during the first quarter of 2019, a new report from data provider CB Insights shows. India, which recorded $285.6 million raised for fintech startups in the period, overtook China to be Asia’s top fundraising hub for financial technology. Both countries clocked in 29 fintech deals, suggesting a cooling investor sentiment in China which saw its height of 76 deals just three quarters ago. 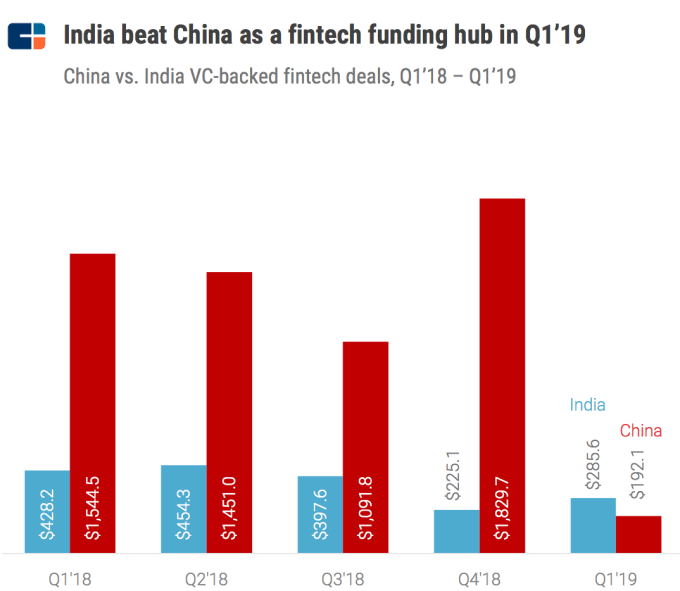 The plunge in China has followed on the heels of tightened regulation around online lending, suggests CB Insights. Over the past few years, China has rolled out a flurry of measures to rein in financial risks arising from its fledgling online lending industry. Peer-to-peer lending, which matches an individual looking for a loan with someone looking to invest, has been the top target in a wave of government crackdowns.

This kind of service offers credit to unbanked individuals who cannot otherwise get loans in a country without a mature unified credit system. But a lack of oversight led to rampant frauds across the board. Thousands of peer-to-peer lending sites shut down due to increased regulation, which is estimated to leave as few as 300 players on the market by the end of 2019, Shanghai-based research firm Yingcai forecasted.

Like China, India’s enthusiasm for finance technology is in part a result of the country’s lack of financial infrastructure. Lending startups are gathering steam as they, like their Chinese counterparts, tailor services to the country’s large unbanked and underbanked consumers and enterprises. Moves from tech leaders are also set to send ripples through the rest of the industry. Amazon finally followed its rivals Paytm, Google Pay and PhonePe to start offering peer-to-peer payments in the country. Walmart is closely watching how Flipkart, which it bought out last year, applies data to payments solution. 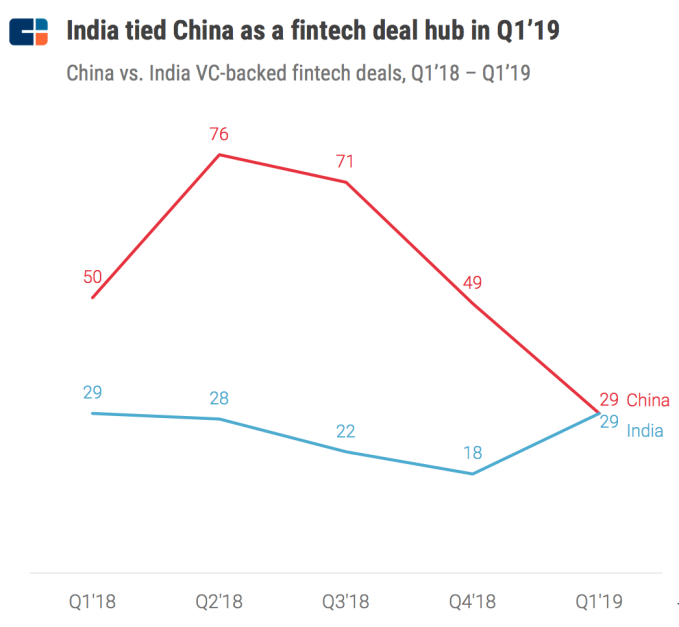 Despite the setback in online lending, a new form of consumer-facing financing vehicle — so-called mutual aid platforms that let patients crowdfund for serious diseases — is enjoying an early boom in China, CB Insights noted in its report. As with peer-to-peer lending, internet-powered mutual aid is trying to fill gaps in a traditional industry. Though most Chinese people are part of a national public insurance scheme, surgical bills can easily bring down an average family.

The top two performers in the sector are unsurprisingly from the top two opposing camps in China’s tech world. Shuidihuzhu, which translates as “water drop mutual help” in Chinese, counts Tencent as a major investor. Users contribute as little as half a cent to a pool of funds that pays out when a patient needs financial aid. The three-year-old platform, which leverages Tencent’s billion-user WeChat messenger to sign up members, claims it has attracted 78.8 million users and paid out nearly 440 million yuan $65.34 million to more than 3,100 families so far.

Shuidihuzhu’s rival, which is called Xiang Hu Bao and means “mutual protection”, is run by Alibaba’s affiliate e-wallet Alipay. Launched only last September, the service said it had acquired over 50 million users by April and had set itself up for an ambitious goal: to reach low-income groups who can’t afford the premiums and advance payments attached to traditional health insurance and to acquire 300 million users in the next two years. That means almost a third of Alipay users, most of whom live in Chia. By the end of 2018, the digital wallet had over 1 billion annual users worldwide.