In the quarter, Target topped estimates for revenue, same-store sales, adjusted EPS and gross margin. It reported $23 billion in revenue versus estimates of $19.82 billion. Its record-setting 24.3% increase in comparable sales was well above the expected 5.8%. Earnings per share came in at $3.38 versus the $1.58 forecast. And its GM was 30.9% instead of the expected 28.98%.

The company attributed its sales growth to a number of factors, including its ability to remain open amid the pandemic as an essential business, its customers’ overall trust in the Target brand, its ability to get customers to shop across its product categories, its digital services and most notably, the return of customers to its stores in Q2.

The latter item doesn’t necessarily mean Target shoppers were walking the aisles, however.

Instead, it speaks to the investments Target made ahead of the pandemic in bridging the gap between online ordering and its physical stores. In Q2, Target’s In-store Order Pick Up grew more than 60%, as shoppers headed inside Target to pick up their web orders, for example.

Target’s Drive Up service, which allows customers to shop online then pull up in designated parking spots to have orders brought their car, was up by more than 700% in the quarter.

And Target’s same-day home delivery service Shipt was up 350% over last year.

That means that for much of what Target customers think of as “online shopping,” their sales were actually being fulfilled by Target’s stores. In fact, Target said its stores fulfilled more than 90% of its second-quarter sales. 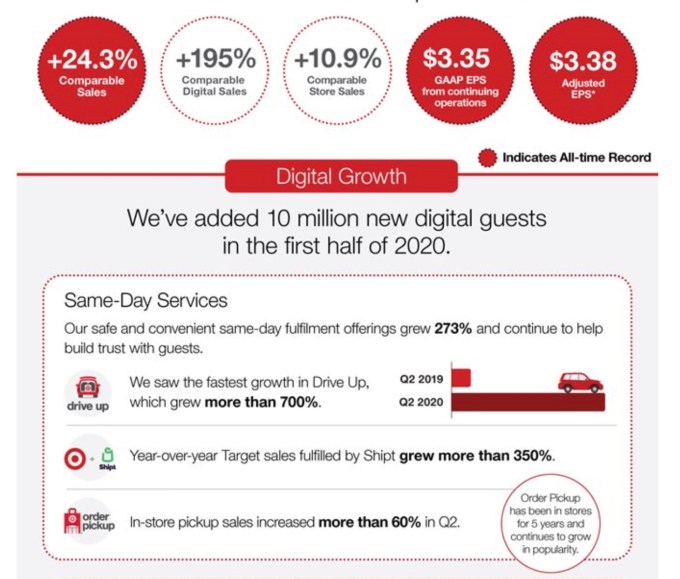 To build out its digital fulfillment services, Target took a tech company-like approach in leveraging internal engineering teams capable of iterating quickly on new ideas. A team of eight, including four engineers, originally built Drive Up starting back in April 2017, for instance. By summer 2017, Drive Up was being tested internally. It then rolled out to Target’s home market by that fall. And as of August 2019, Target’s Drive Up service was available nationwide.

The retailer has also made key acquisitions to aid its e-commerce operations, including its $550 million deal for Shipt in 2017, and more recently, its acquisition of same-day delivery technology from Deliv back in May. It has also integrated Shipt’s same-day service directly into its own website and app, instead of relying only on Shipt’s dedicated brand to reach Target shoppers.

The results of these efforts are now paying off in a pandemic where customers don’t necessarily want to browse stores’ aisles in person to shop. That has led to Target seeing what Yahoo Finance today described as “tech company-like growth” for its retail business.

Target’s chairman and CEO Brian Cornell additionally noted the company has added $5 billion in market share in the first six months of 2020, during which time it has added 10 million new digital customers.

“Our second-quarter comparable sales growth of 24.3% is the strongest we have ever reported, which is a true testament to the resilience of our team and the durability of our business model. Our stores were the key to this unprecedented growth, with in-store comp sales growing 10.9% and stores enabling more than three-quarters of Target’s digital sales, which rose nearly 200%,” he said. “We also generated outstanding profitability in the quarter, even as we made significant investments in pay and benefits for our team. We remain steadfast in our focus on investing in a safe and convenient shopping experience for our guests, and their trust has resulted in market share gains of $5 billion in the first six months of the year,” Cornell continued.

“With our differentiated merchandising assortment, a comprehensive set of convenient fulfillment options, a strong balance sheet and our deeply dedicated team, we are well-equipped to navigate the ongoing challenges of the pandemic and continue to grow profitably in the years ahead,” he said.

The pandemic has played a role in what customers bought, too. Target said its sales were up across all five of its core merchandise categories. This was led by the strongest sales in electronics, a category that was up 70% year-over-year due to people staying at home for work, school and entertainment, leading to more purchases of things like computers or gaming systems. Electronics were followed by home products, which were up by 30%, then increases of 20% for the beauty, food and beverages, and essentials categories. Apparel even shifted from a 20% decline in Q1 to double-digit growth in Q2. Customer basket size also grew 18.8%, as people shopped for more items on their Target runs.

Like Walmart, Target also saw a boost from government stimulus checks, which will likely taper off next quarter. But Target declined to offer further 2020 guidance, saying that the COVID-19 crisis makes consumer shopping patterns and government policies unpredictable.