Target runs are about to get a lot easier. The retailer today is officially expanding its new curbside pickup service called Drive Up to the first locations outside of its home market of Minneapolis-St. Paul, where it had been in pilot testing. With Drive Up, customers can place orders using the Target app on their phone, then drive to their local store and have their purchases brought out directly to their vehicles, minutes after arrival.

Starting today, nearly 270 stores across Florida, Texas and the southeast will now offer Drive Up to their customers, which is still on track to reach 1,000 of Target’s 1,800 stores by year-end.

In addition to Florida and Texas, some stores in Alabama, Georgia, Mississippi, Oklahoma, Louisiana, and South Carolina also now have access to Drive Up. The locations will often overlap with where Target’s Shipt delivery service is available. 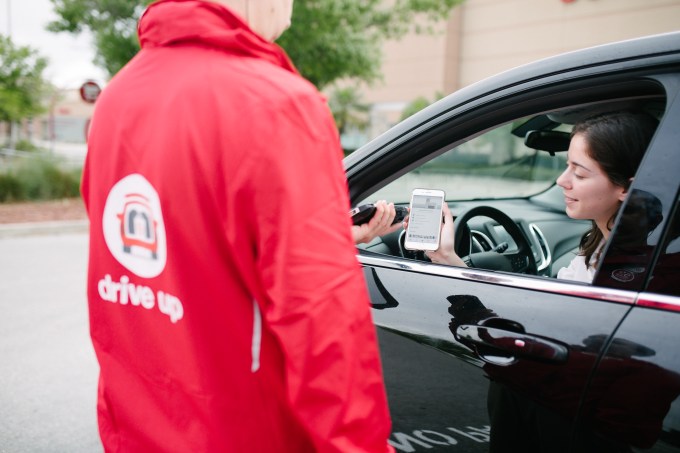 With Drive Up, Target aims to better compete with the likes of Walmart and Amazon.

Both today offer curbside pickup of groceries – the former via its online Walmart Grocery shopping service, and the latter through AmazonFresh and Whole Foods. Target, meanwhile, acquired grocery delivery service Shipt for over half a billion last year. The service has yet to roll out a grocery pickup option. (That’s something in discussion, but the near-term focus is on expanding Shipt to the majority of Target’s U.S. stores by the end of the year.)

In addition, both Amazon and Walmart offer in-store pickups and self-serve pickup experiences with Amazon Lockers and Walmart’s Pickup Towers, where available.

Target Drive Up doesn’t directly compete with either grocery pickup or self-serve. It isn’t for fresh and frozen items, but is for almost anything else – from everyday essentials to TVs to clothing to beauty to household goods and more. Consumer packaged goods can be ordered through Drive Up, too, like chips, crackers, cereal, cookies, canned goods, coffee, etc.

The assortment is similar to what’s available for in-store pickup, which equates to hundreds of thousands of SKUs. It’s broader than what’s available through Target’s next-day delivery service, Target Restock.

How Drive Up Works

Using Drive Up is pretty simple – something that reflects the fact that Target has its own in-house engineering teams developing its new e-commerce experiences. Drive Up was built by a team of eight, including four engineers, in a matter of months starting last April. By summer 2017, it was being tested internally. And by October, it had rolled out to consumers in Target’s home market.

To get started, you shop for items as usual in the Target app.

But there will now be a new option for “drive up” on the product detail screen. This screen also shows you if the item is in stock at your local store, if you can order it for in-store pickup, and how soon it could be delivered to your home. 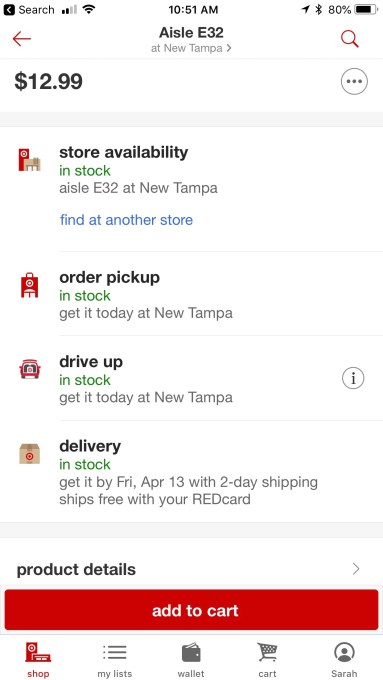 To order it for “drive up” pickup, you just tap that option to add the item to your cart. You can also move items to “drive up” from the checkout screen, if you prefer. Cartwheel discounts won’t be available on Drive Up items – you have to go in store for that.

The app will also ask you for make of car (SUV, van, wagon, etc.) and color as part of the ordering experience. 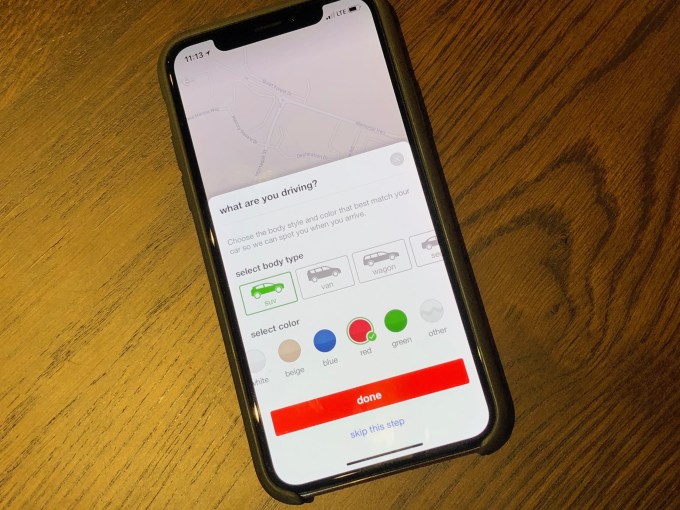 After you complete the checkout, the app will inform you that your “drive up” order will be “ready within 2 hours.” But that’s just Target giving itself a buffer, it seems. 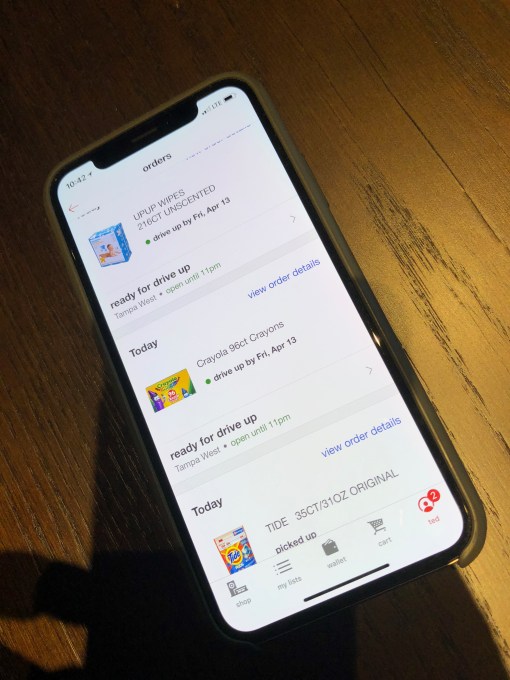 In early tests, Target was putting orders together as fast as 21 minutes, according to an analyst report from Gene Munster of Loup Ventures. 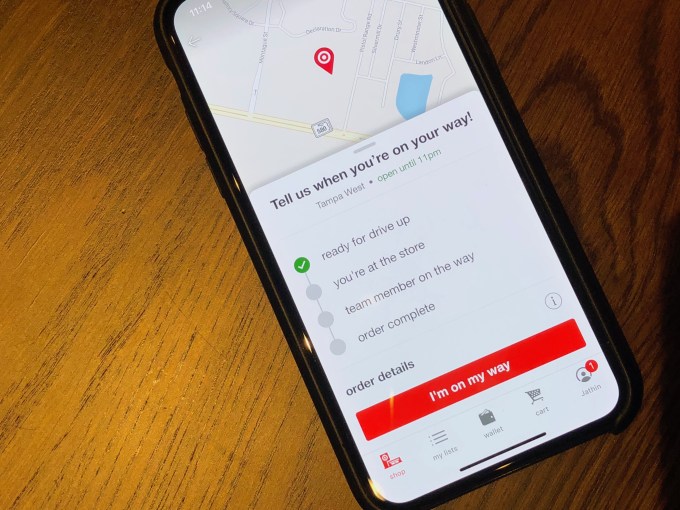 That speed comes from having trained, dedicated store staff who handle orders as soon as they come in. On their own handheld devices (Target calls the store staff’s Android-based mobile Zebra device a “MyDevice”), staff will see pending orders and customers’ ETA to the store.

The employee pulls items from store stock in the back room, as well as any other remaining items from the floor – scanning barcodes as inventory moves from stock to cart, then cart to bagged order. 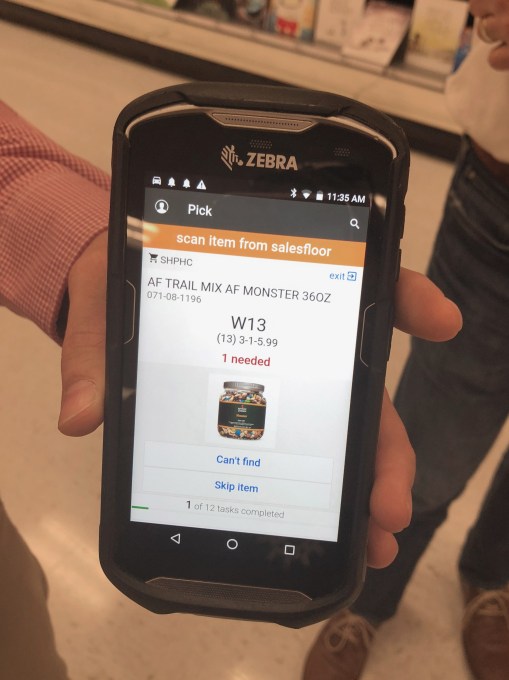 Items are currently being bagged in special “Drive Up” plastic bags, which are slightly larger and sturdier than Target’s regular bags. 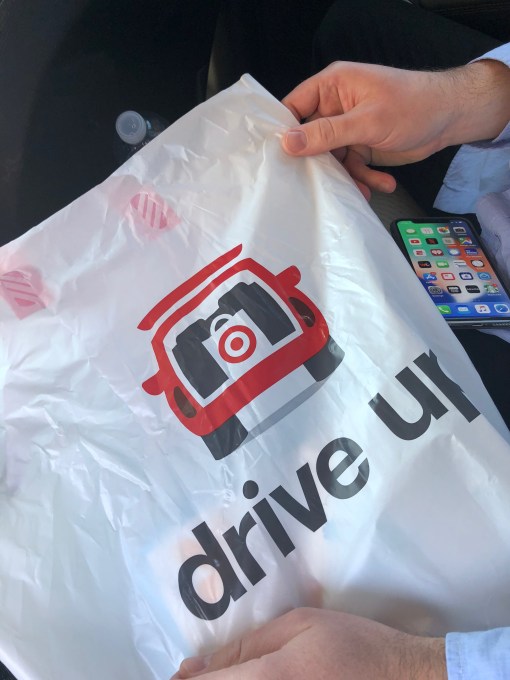 These are placed in cardboard bins at the customer service desk while larger items – like TVs – would sit on the floor behind the service desk. 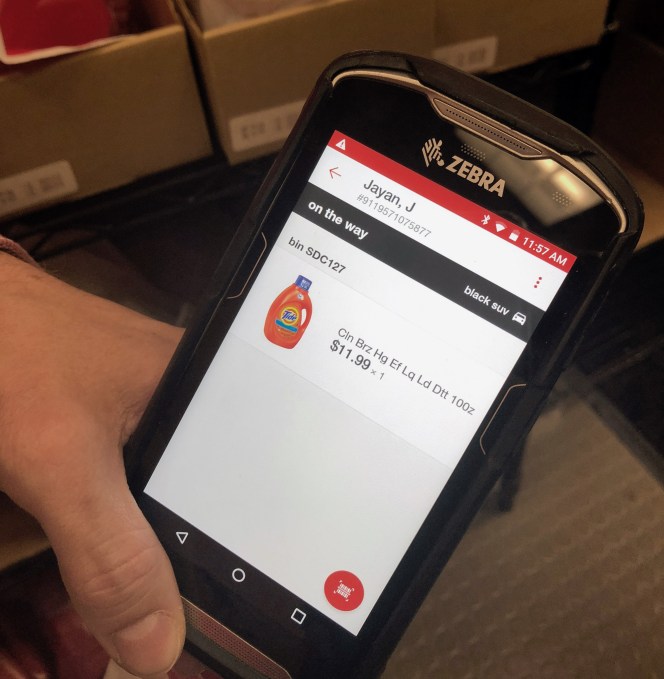 The Target mobile app will alert the customer as soon as their order is filled and ready.

The customer then hits the “I’m on my way” button in their app, which notifies Drive Up staff via an alert  – a car horn beeping twice – on their MyDevice. (The engineers added the car honk during pilot tests, because they found other types of alerts were getting missed. So if you hear a car horn inside a Target store one day, that’s probably why.) 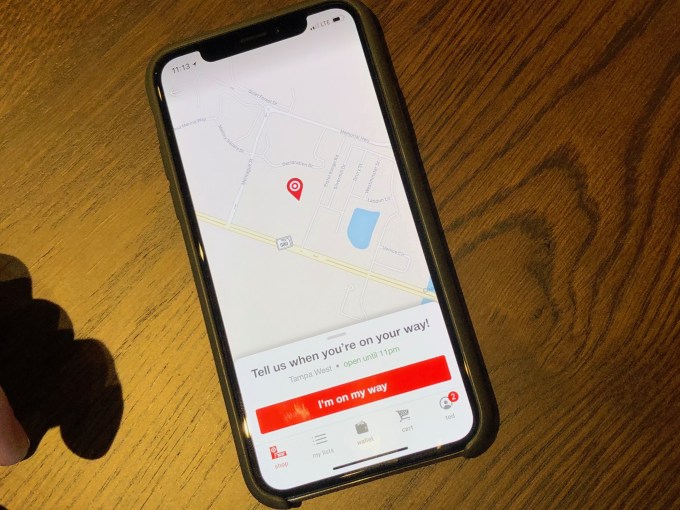 Target’s app asks customers to share their location. This allows staff to get a head’s up on the customer’s arrival, but doesn’t continue to track location after orders are complete. (However, as a nice touch for the privacy-minded, customers who don’t feel comfortable sharing their location, can choose to share their status manually instead.) 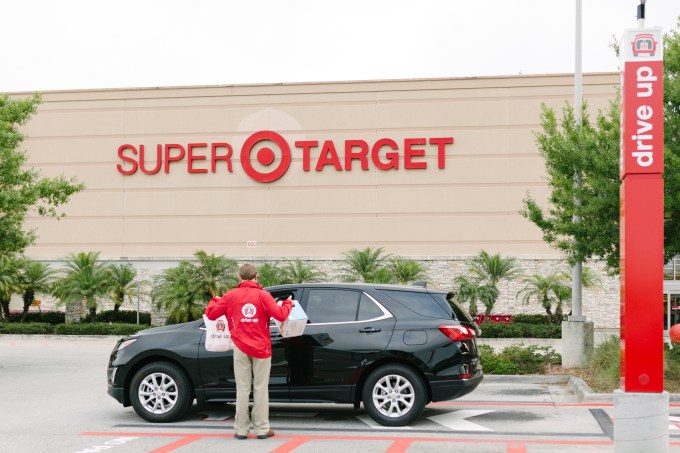 At arrival, customers park in one of four designated spaces next to a “Drive Up”-branded pole that’s lit up at night thanks to the solar panel at its top. They don’t have to call a phone number – Target staff knows they’ve arrived. (Yep, the car horn notification again). An employee then brings the order to customer’s car.

The wait time, during Munster’s tests, averaged an impressive 1 minute, 18 seconds. (While I tested it as well, I can’t speak to wait time as it was pre-launch, and special considerations were taking place for demo purposes. But I did find the checkout flow in the app to be easy to follow.) 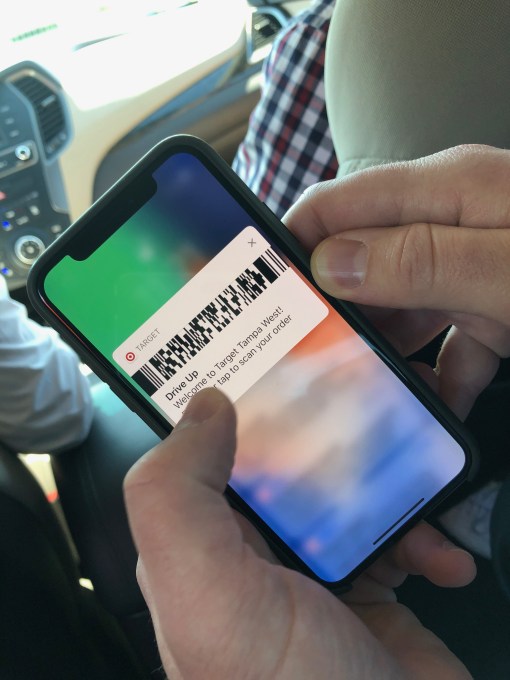 As opposed to asking for a driver’s license, the Target employee will scan a barcode in the customer’s app which confirms their identity. The customer finger signs on the employee’s device to pay and the transaction is completed with a “thank you” confirmation screen appearing in the customer’s Target app. 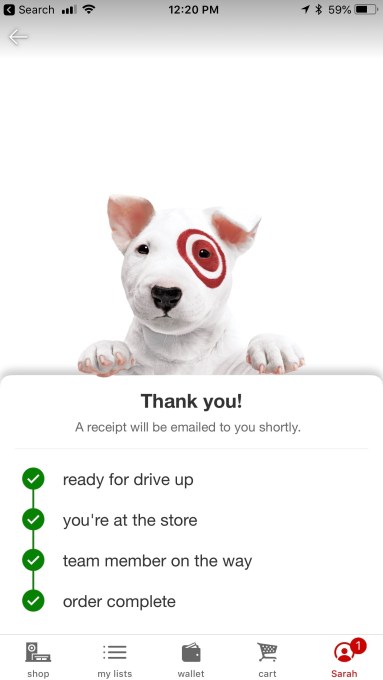 While it makes sense to offer curbside pickup for competitive reasons, there is a question as to whether it will lead to a decrease in foot traffic in stores and the related impulse buys Target is famous for.

That’s not been the case so far, claims Dawn Block, Target’s SVP of Digital. While it’s too early to state this definitively, Target believes these orders will end up being additive to its bottom line.

“We find this is a slightly different trip type. It’s really more of a fill-in and a quick trip,” Block explains. “And when the guests have time and want to head into the store, we find that they’re doing that and they’ll continue to do that….We believe that it absolutely is [additive],” she says. 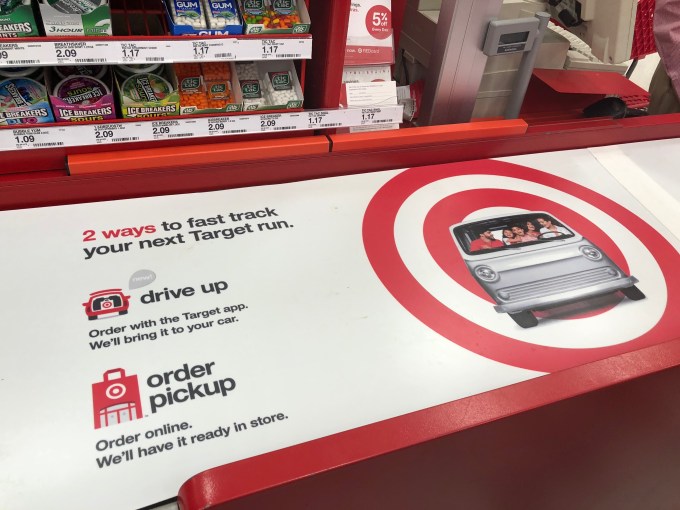 If that turns out to be true, Drive Up could require Target to adjust its staffing in some locations.

During pilot testing, some stores managed with their existing teams, while others required staff to work more hours or hired additional personnel. And now that customers are getting orders at their cars in under two minutes, Target’s given itself a tight baseline to maintain even as Drive Up scales.

“We will watch the staffing levels really closely and make sure that we’re continuing to deliver on the guest expectations,” Block says. “The guests love that speed and convenience. So we’re going to staff appropriately to keep that up,” she commits.

But in the broader market, Drive Up isn’t just competing against Target’s own in-store traffic – it’s competing with the idea that shoppers will still visit physical stores when they can instead push buttons on their phone and have items appear at their home only hours later.

Target says it will be getting the word out about Drive Up through things like in-store signature, belt wraps (see above), and its team members.

The Drive Up service will continue to roll out across the U.S. throughout the year.

Correction, 4/17/18, 11:30 AM ET: Article updated to clarify the Drive Up assortment is larger than, not similar to, Target Restock.