With the already narrow window of remaining time to complete a census count abruptly cut short by the Trump administration, getting every person living in the U.S. to fill out the form, already a scramble in a normal census year, is a compound challenge in 2020.

The critical once-a-decade count determines everything from Congressional representation to Pell grants to funding for school lunch programs — and as of this week, as many as 60 million households remain unaccounted for. If left untallied, those individuals and their communities will be invisible when the time comes to allocate vital federal resources.

To rise to that challenge, the progressive volunteer and campaign coordination platform Mobilize is launching a central resource hub to empower census volunteers during the six-week final stretch. The civic tech startup noticed that a handful of nonprofits doing census work were already bringing campaigns onto the platform, and the new site, GetOutTheCount.com, will amplify those efforts and collect them in one place. 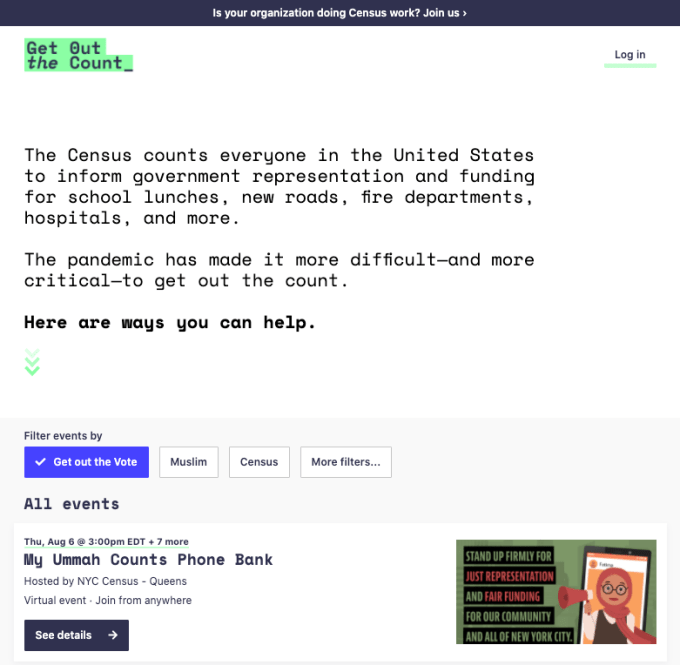 “Organizations are trying to reach communities and help them understand what they’re going to be asked in the census, what they’ll not be asked by the census and make sure… that those communities are aware of what their rights are here, are aware of what the deadlines are, and can be counted,” Johnson said. “Because we know that being counted is such a fundamental piece of being included in our democracy.”

One of the biggest challenges this census year is the focus on reaching historically undercounted Black, Latinx and indigenous communities — a key goal if the 2020 census is to capture U.S. demographic shifts and allocate resources and representation accordingly. With the shortened deadline, the pandemic and tens of millions of “hard to count” households left uncounted, the stakes couldn’t be higher.

“We’re facing this monumental challenge, particularly with COVID going on,” Johnson said. “It’s always hard to perform the census every 10 years and make sure that you’re getting accurate counts.

“It is additionally hard to do that if you’ve got a once-in-a-century pandemic that is preventing people from answering their mail, from answering the door, from all the things that would [lead to] a more representative count.”

Mobilize launched in early 2017 amidst the post-Trump surge of activism on the left and quickly became ubiquitous among progressive causes and candidates. In the 2020 Democratic primary contest, Biden, Bernie and everybody in between relied on the platform to marshal campaign volunteers and steer supporters. This January, the civic tech startup raised a $3.75 million Series A round led by progressive tech incubator Higher Ground Labs. LinkedIn co-founder Reid Hoffman, a prominent Democratic donor, and Chris Sacca’s Lowercase Capital also contributed to the round.

The digital platform aims to both be a unifying resource to Democratic and progressive campaigns and to do what the events page on social networks like Facebook can’t. For Mobilize, that means translating what on a different platform might remain aspirational online activity into action. It accomplishes that by sending volunteers reminders, prompting them to invite friends and staying connected even after they take action to keep them engaged in similar campaigns.

Groups already coordinating their census campaigns on Mobilize include NYC Census 2020, CensusCounts and Fair Count, an organization founded by Fair Fight founder and former Democratic nominee for Georgia governor Stacey Abrams. Fair Count’s mission is to reach “hard to count” communities in Georgia, including the state’s historically undercounted Black male population, to win the state the resources and representation that reflect its reality.

GetOutTheCount.com lets anyone type in their zip code to see local census mobilization efforts coordinated across those organizations and others. It stands to reason that if you’re willing to phone bank to reach people who’ve yet to be counted for one group, you’d probably be willing to do it for a different one with overlapping goals.

For Mobilize, the crucial final census push is something of a crucible for the platform’s power in a year that’s gone all-digital. Johnson has seen virtual events skyrocket on Mobilize as COVID-19 took root across the U.S. Prior to the pandemic, about a quarter of events were virtual — now they all are.

Johnson acknowledges that the “headwinds” against an accurate census count in 2020 are very real, both politically and logistically, and particularly now that the Trump administration has trimmed the deadline. But he hopes that Mobilize is able to help organizations leverage the power of the platform’s network effect and its scalability during a national crisis that has a nation cooped up indoors rather than knocking on them.

In spite of the crisis, or perhaps because of it, Mobilize has seen a major uptick in volunteer signups between the months of April and July and expects August to be even bigger once the numbers are in.

“2020 is a very hard year for a lot of people for very real reasons,” Johnson said. “I think that is actually motivating even more civic engagement by virtue of the fact that people are wanting to see circumstances change and help their friends, neighbors [and] communities in this moment of existential crisis, on whatever axis you’re evaluating it.”