It’s a mark of 2020 that the image of throngs of Americans flocking to polling places to exercise their right to vote, once a heartening symbol of democracy in action, is now a nightmare scenario that could visit widespread death on unsuspecting communities nationwide.

In the midst of a viral outbreak that’s infected more than half a million people and swiftly claimed more than 20,000 lives in the U.S. alone, the country is grappling with the question of how Americans will safely cast their votes in November’s election — and time is running out.

A number of state officials have pushed back their primaries to protect residents, but last week’s Wisconsin primary, with its long lines, uneven protective measures and shuttered polling places, demonstrated a worst-case scenario for what November’s general presidential election could look like if states don’t quickly implement a Plan B.

But a handful of lawmakers pushing for a more equitable voting system don’t believe we need a full-on Plan B to rescue the election, just a scaled-up version of systems in place that millions already use to cast their ballots each election cycle. Early voting, absentee voting and mail-in voting have all ticked upward in the last 20 years. Five states now use vote-by-mail as their primary way of voting: Oregon, Washington, Colorado, Utah and Hawaii. The military also relies on mail-in absentee voting for those deployed overseas. In 2018, one in four Americans who cast a ballot did so through the mail. 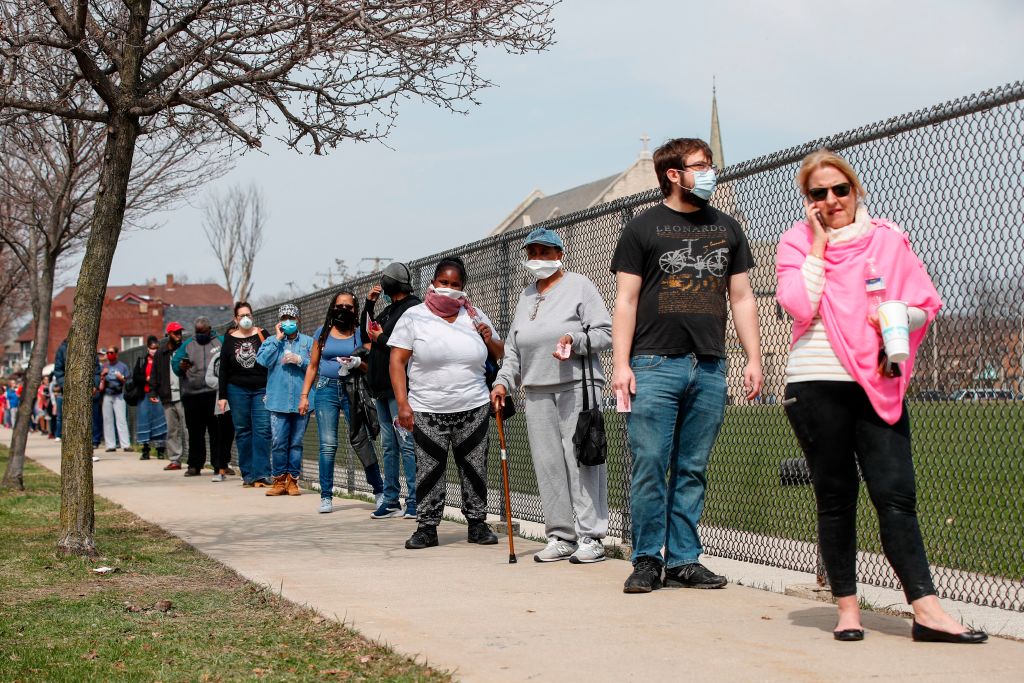 With the economy still frozen in place, Congress is working on another big coronavirus relief package, though efforts are at a political standstill for the moment. Proposing their own bill, Democratic Senators Amy Klobuchar and Ron Wyden are striving to get vote-by-mail provisions into the next relief package. “Americans shouldn’t have to choose between their health and casting a ballot,” Klobuchar said in a bipartisan call on vote-by-mail efforts. “And it is wrong to shortchange our election officials as we provide relief to address the effects of this global pandemic.”

The bill, called the Natural Disaster and Emergency Ballot Act (NDEBA), seeks to provide 20 days of early voting for all states, a guarantee that all voters can request to vote with a no-excuse absentee ballot, accommodations for voters who don’t receive an absentee ballot in time and additional funding for the Election Assistance Commission to make the changes.

“We are gonna fight like hell to get our bill in the next COVID-19 package,” Wyden told TechCrunch in an interview.

Republicans in Congress have yet to show any support for expanded mail-in voting, but a swath of Republican state officials close to the election process have turned to mail voting systems to keep residents safe, including the secretaries of state in Kentucky, West Virginia and Georgia.

On the bipartisan call led by Sen. Klobuchar with secretaries of state last week, West Virginia Secretary of State Mac Warner was skittish about the idea of a permanent, expanded vote-by-mail system, but agreed voters should be allowed to cast their votes safely through the mail during the COVID-19 crisis. He previously announced that all West Virginia voters would be sent application postcards for voting through the mail.

“The governor, attorney general, county clerks and I have zealously worked together within state law to balance health concerns with the ease of voting,” Warner said. “We have determined that the absentee voting process is the safest method… Your ballot box is as close as your mailbox.”

Washington Secretary of State Kim Wyman, also a Republican, touted her state’s own system in the bipartisan call.

“Washington state’s vote-by-mail system is accessible, secure, fair and instills confidence in our voters,” Wyman said, encouraging officials “across the political spectrum” to unify around keeping voters safe and stressing that expanded absentee voting and vote-by-mail “must be options on the table” for 2020.

Bernie Sanders ends his historic campaign for the presidency

On the call, secretaries of state around the U.S. emphasized the need to act quickly to scale up absentee voting systems, stressing that funding, organizing and putting new systems into practice will be a scramble over the next seven months.

President Trump has attacked vote-by-mail systems in recent White House coronavirus briefings and tweets, but there is no evidence that voting through the mail is “fraudulent in many cases,” as he has claimed. Trump himself uses mail-in voting to cast his absentee ballot in Florida.

The president’s attacks on expanded vote-by-mail also contradict the CDC’s own guidance for safe elections during the pandemic, which encourage expanded mail-in voting to “minimize direct contact with other people and reduce crowd size at polling stations.”

Out of the billions of absentee votes cast through the mail in the U.S. over a 12-year period, an examination of all known instances of voter fraud found only 491 cases involving absentee voting. With those numbers, Americans are less likely to commit voter fraud than they are to be struck by lightning. In states with vote-by-mail, safeguards built into the system can catch or deter anyone who might tamper with a ballot. In Oregon, which uses forensic signature matching to secure its vote, a poll worker was sentenced to 90 days in jail and ordered to pay a $13,000 fine for tampering with two ballots.

Republicans today mostly believe that Democrats would benefit from any effort that might broadly boost voter turnout, a perspective that the president echoed in a recent Fox News interview discussing the early coronavirus relief bill. “The things they had in there were crazy,” Trump said. “They had things — levels of voting that, if you ever agreed to it, you’d never have a Republican elected in this country again.”

That package included $400 million to safeguard November’s election — an amount Democrats argue is insufficient — and no requirements that states implement vote-by-mail. But the conversation around vote-by-mail hasn’t always broken down along today’s political lines and the political reality of a broad mail-in voting system is likely nuanced, though untested on a national scale.

An early and vocal proponent of vote-by-mail, Wyden explains that those lines have been redrawn over the years as attitudes toward implementing vote-by-mail have shifted.

“You have to put this in context of where we are,” Wyden said, noting that the debate around vote-by-mail was an “academic thing” two decades ago, with political scientists hashing out which party stood to benefit. In Oregon, other Democrats initially opposed vote-by-mail efforts, believing that because their voters skewed older, Republicans would benefit.

“After all this bickering back and forth on who would benefit, Oregonians put it on the ballot.” In 1998, 69% of voters supported the ballot measure, which passed easily.

In the U.S., implementing any voting changes across the country is politically challenging due to the fact that states oversee and administer their own elections. Even the oversight process varies widely from state to state. Differences aside, many states have expanded absentee voting in recent years.

“Back then when I was introducing those first bills, you didn’t have the number of people voting absentee that you have today,” Wyden said. While voting absentee once required a justification, a “big chunk” of those excuse requirements have given way since then, allowing more people to vote by mail.

“Absentee voting is enormously popular,” Wyden said. “Basically what I tell people… is what we’re really doing with our legislature is kind of upscaling what is already going on — not reinventing the wheel.”

Wyden warns that we’ve already seen the worst-case scenario play out in Wisconsin. “You have older voters waiting in line to talk to older poll workers… some had masks, some didn’t.”

“[In] Wisconsin… the legislature said ‘we’re going to put the lives of our people at risk.’ I thought that was very troubling,” Wyden said.

“All I can think of was at this point in the middle of a pandemic, I don’t think this is a partisan issue.”