Amazon is giving live streamers a new way to earn commissions on purchases of products showcased in their streams. The company is today adding live streaming to its existing Amazon Influencer Program, which before today, allowed social media influencers to earn money by pointing fans to their favorite Amazon products through posts on Facebook, Twitter, Instagram and YouTube.

The Influencer Program quietly debuted in 2017 as a way for Amazon to capitalize on the growing trend of influencer marketing as a way to drive sales. The program itself is a step up from the Amazon Associates program, as it requires approval to join and gives influencers their own page with an Amazon URL to showcase their recommendations.

Though Amazon already catered to video creators through the program, the new live-streaming option is focused on its own Amazon Live service. A sort of modern-day version of QVC that streams directly on Amazon’s shopping site, Amazon Live launched last year as the retailer’s latest effort to attract consumers by way of live video.

On Amazon Live shows, hosts talk about and demonstrate products, much like they would do on home shopping networks. Underneath the video, a carousel guides consumers to purchase the items featured. Commissions are paid on products they sell.

This service wasn’t Amazon’s first attempt at live content — the retailer pulled the plug on its earlier effort in live content, a short-lived “show” called Style Code Live that featured hosts with TV and broadcast backgrounds who brought in experts to talk beauty and style tips.

Amazon Live, however, isn’t narrowly focused on fashion and beauty. Instead, its content can cover a range of categories — like cooking, fitness, baby, home, auto, electronics, toys, pets, moves and TV, industrial and much more. There are also multiple live channels to flip through, unlike on cable TV shopping networks.

To broadcast to Amazon Live, video creators and now, influencers use the Amazon Live Creator app to live stream and chat with viewers as they show off the products to be shopped. On the Amazon Live homepage, fans can also chat with the host and one another in a Twitch-like side panel next to the live video.

You can see a few influencers’ streams in action, with early adopters Mirror & Thread, Beauty by Carla, The Deal Guy and BrickinNick already available on Amazon Live, as the service has been beta testing for several months.

In addition, influencers who live stream on Amazon Live as a part of the new program will have their videos not only streamed on the Amazon Live homepage itself, but also on their own dedicated Amazon storefront. As they grow their fan base, they can move up levels from “Rising Star” to “Insider” to “A-List.” 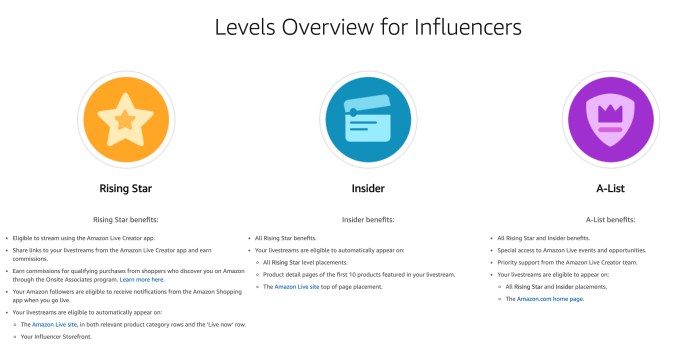 These tiers have various rewards and features. Rising Star, for example, offers paid commission on qualifying purchases through Amazon’s Onsite Associates program, while higher levels get to have their videos showcased on product detail pages in addition to their own storefront and Amazon Live. A-Listers also receive priority support and special access to Amazon Live events and opportunities, says Amazon.

“We’re focused on bringing customers fun and interactive shopping experiences, while also helping influencers grow their businesses on Amazon,” said Amazon Live Director Munira Rahemtulla, in a statement. “Livestreaming enables creativity, connection, and inspiration, and the opportunities are endless – we’re excited to introduce the Amazon Live Creator app to influencers and can’t wait to see what they’ll create for Amazon customers,” she added.

TechCrunch asked Amazon to clarify how influencers are compensated for their streams, given that today’s social media personalities have a number of ways to work with brands for profit — including through YouTube BrandConnect, Facebook’s Brand Collaborations and other programs, for example. Amazon says it pays livestreamers based on the Associates Program Standard fees schedule, where commission vary by category from 1% to as high as 10% (e.g. luxury beauty) for example.

(7/16/20: We’ve updated this post with more information about commissions)