Amazon’s Influencer Program, a service that allows social media personalities to earn commissions on the Amazon products they promote, is now accepting sign-ups from YouTube influencers who want to participate. Last Thursday, Amazon quietly enabled a self-service tool for YouTube stars that lets them request to join the highly-vetted program, which had first launched into beta in late March.

The Influencer Program, until now, has been operating in a closed beta. Social media influencers could apply to the program by filling out an online form.

These applications were vetted, as Amazon considered factors like the size of the influencer’s online following, fan engagement on their posts, quality of content, and relevancy for Amazon, among other things.

The idea with the program is to allow Amazon to better tap into social media’s power to drive sales. Today’s influencers regularly promote products they like in their online postings, including YouTube videos – often either as part of a brand relationship or as a means of generating income through affiliate sales. Amazon wants to now insert itself more directly into that action.

An Amazon spokesperson confirmed the program’s further opening in a statement to TechCrunch:

“We recently enabled a self-service tool for YouTube influencers only to be able to sign up for the Amazon Influencer program,” they said. 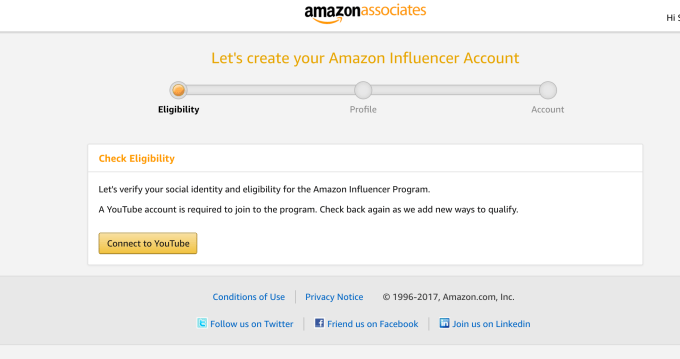 The new tool is aimed specifically at YouTubers who want to have their channel vetted by Amazon. After clicking “Get Started,” applicants are walked a few steps where they have to verify their social identity and eligibility. The tool states that a YouTube account is required to join, but other ways to qualify will be added in the future.

The program also has a refreshed website with a more polished look alongside some basic details on how the program works. 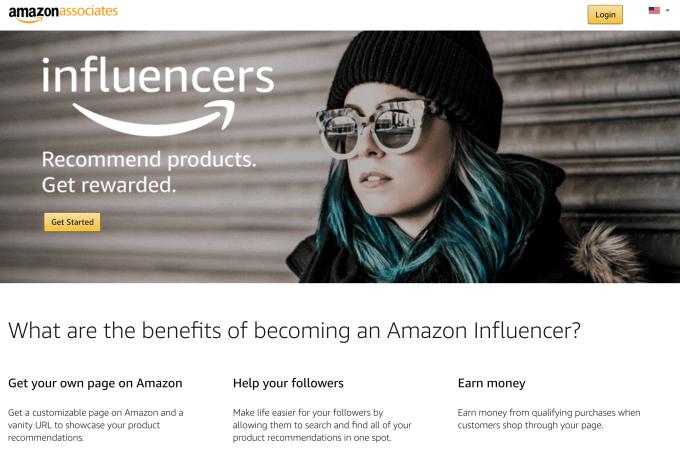 According to the website, Amazon Influencers will get their own customizable page on Amazon, including a vanity URL they can share where their product recommendations are featured. When customers shop their page, the influencer will earn a commission on qualifying purchases.

The page explains, too, that the program is an expansion of the online Amazon Associates program for social media influencers, as it’s offering a new way to direct traffic to Amazon to boost sales.

Early program participants include popular YouTube channel What’s Up Moms, Mark Cuban, and Felicia Day, according to the Influencer homepage. (Amazon will not disclose how many beta participants the program has signed up to date.)

As it falls under the Amazon Affiliate Program, the Influencer Program is not necessarily offering higher commissions – it’s simply making it easier to send customers to Amazon to shop the product recommendations.

Key to this program is that vanity URL, which is meant to be something short and memorable.

Amazon notes it’s “especially useful when promoted verbally or in an environment where linking is not possible.” In other words, it could easily be mentioned in a YouTube video while the product being promoted is discussed.

This is not the first time Amazon has tried to use video to drive sales. It had launched its own watch-and-shop online show called “Style Code” last year, but it didn’t pan out. The show was canceled in May. However, with the Influencer Program, Amazon can effectively turn YouTube stars into sellers, also much like a modern-day HSN or QVC.

While the debut of the self-serve tool seems to imply the program has now fully launched, we understand that’s not the case. The program is still considered to be in “beta” for the vast majority of people trying to sign up, as their applications will be vetted manually by Amazon staff.

It’s unclear how this program may tie into Amazon Spark, the retailer’s recently launched Instagram-like service, however. On Spark, Prime members can post photos of products they like and other ideas for all to see. Presumably, influencers could post their URL there as well, as the link can be shared anywhere on the web.

The Influencer Program is still something of an experiment for the time being, and may change in the future as Amazon broadens access.