Teaser images and leaked photos of the 2021 Mercedes-Benz S-Class suggested the automaker was moving toward a more digital-centric interior. That might have been an understatement.

Mercedes-Benz revealed Monday its second-generation MBUX infotainment system, and it is loaded with new technology, including touchscreens, augmented reality heads-up display and improved voice and facial recognition. Gone are many of the physical switches found in the older version of the S-Class. Mercedes said it removed 27 mechanical switches for the 2021 model.

The upshot: Mercedes is linking technology with luxury. And while the entire interior of the new S-Class has yet to be revealed, it appears the company is transitioning away from a rather crowded dash and center console area that in previous models included every kind of analog button and switch, as well as newer digital displays.

Before diving into the tech that stands out in the newest version of MBUX, here’s a handy graphic that provides an overview. 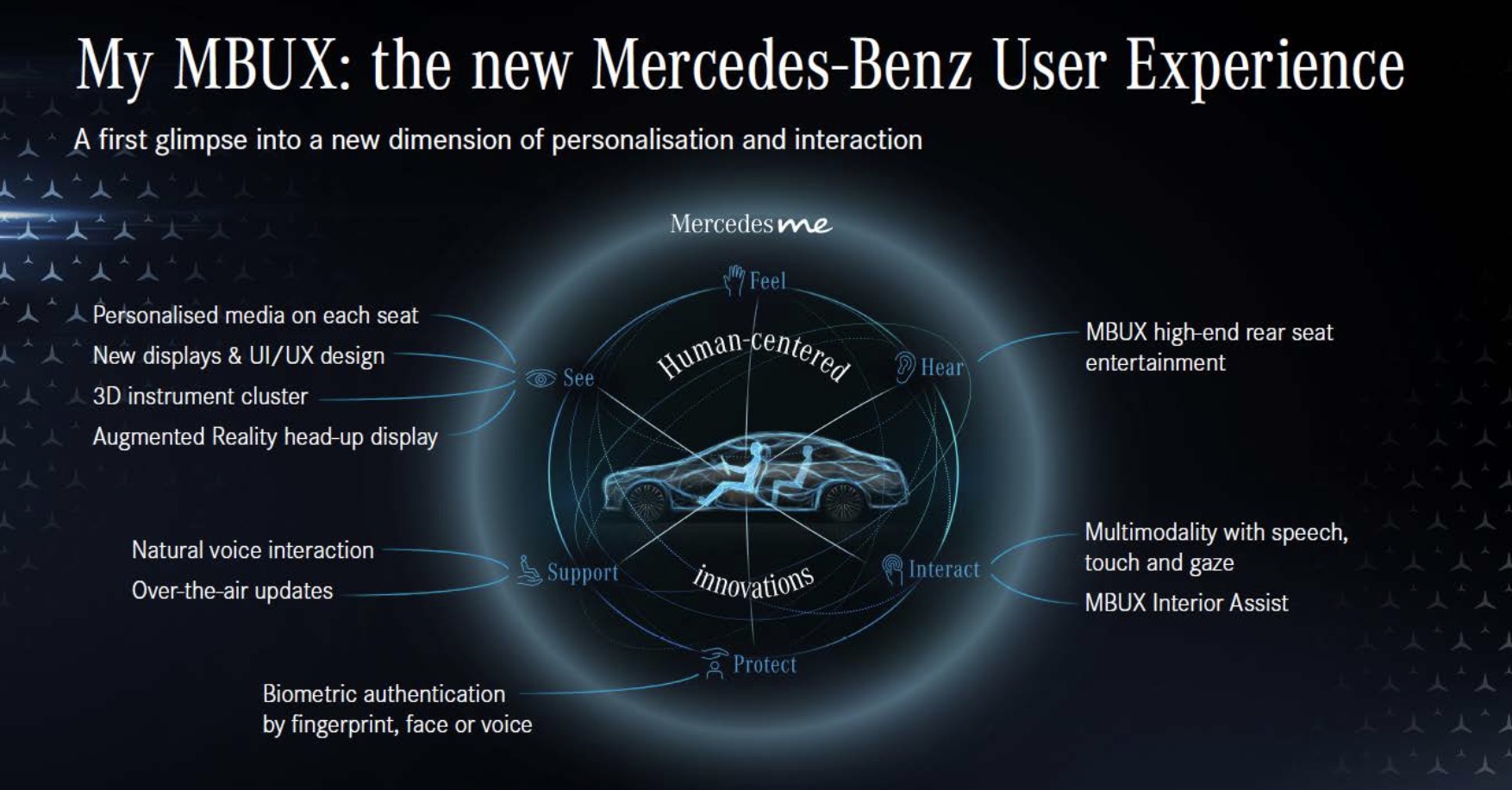 The first-generation Mercedes-Benz User Experience, or MBUX, system was unveiled in January 2018 at the CES tech trade show and debuted in the automaker’s A Class hatchback. That was a departure for Mercedes, which has historically reserved its best tech for its flagship model, the S-Class. Mercedes is returning to that strategy with the new version of MBUX heading to the 2021 S-Class.

Here are the highlights.

You read that correctly. The 2021 Mercedes S Class will have up to five touchscreens, which includes displays for passengers. The S-Class will come standardly equipped with 12.8-inch OLED screens that include haptic feedback.

The user can control or access features on the displays by touching or swiping the actual screen or by using voice control, natural hand gestures and now gaze control. Mercedes did hold back on some functions, like lights and windshield wipers off of the touchscreen. The climate control panel is permanently at the lower edge of the display.

The system will provide the kind of customization an S-Class owner would expect. Preferences can be stored in the vehicle’s personal “Mercedes me” profile. Up to seven different profiles are possible in the vehicle.

The appearance of the screens can also be individualized with a choice of four display styles — discreet, sporty, exclusive and classic. There are three user modes, as well, to cover navigation, assistance and service. Screen content can also be shared with other passengers.

In the back seat, where up to three screens are optionally available, passengers can share, select and amend navigation destinations.

Mercedes has adopted 3D technology into the vehicle, specifically for the driver display. The three-dimensional effect is possible without having to wear 3D glasses, the automaker said.

The company was able to achieve this effect by combining a conventional LCD display with a special pixel structure and a controllable LCD aperture grill. A barrier mask is placed a few millimeters in front of the LCD. The result is that the left and right eye see different pixels of the LCD, creating the illusion of depth.

The 3D display feature can be adjusted to a 2D or flatter graphic.

Mercedes-Benz put an early emphasis on voice in the first-generation of MBUX. The automaker said it has improved its voice assistant further. For instance, certain actions can be triggered without the “Hey Mercedes” activation keyword to accept a phone call or display the navigation map. “Hey Mercedes” can now explain further in-car questions such as where the first-aid kit is located or how to connect a smartphone via Bluetooth.

The voice assistant now understands commands and questions relating to infotainment sector and vehicle operation in 27 languages. It has also become far more natural and continues to learn — two areas we hope to test. For instance, the voice assistant understands indirect language, such as if a user says “I am cold” instead of the clear command “Set temperature in footwell to 72 degrees.”

There’s also a new “Chit-Chat” feature that supplies the right answer to many questions — even questions about animal noises or general knowledge can be answered, Mercedes claims.

Mercedes is all-in on the security of this vehicle. The classic PIN entry is still on the S-Class. The automaker has added a new authentication method to ensure a high level of security.

The system now combines fingerprint, face and voice recognition. This allows access to individual settings. That extra layer of security isn’t there to protect your seating preference, although perhaps that’s worth protecting. It’s also there to allow users to make payments digitally from within the vehicle.

Besides the voice assistant, the infotainment system is equipped with other tools to assist the driver.

For instance, there’s a special blind spot warning designed for drivers leaving their vehicle. Sensors and cameras can detect the driver’s intention to leave and will issue warning if there are road users and obstacles alongside the car. Another warning will alert of an unattached child seat on the front passenger seat.

The vehicle will also listen for cues to gauge the alertness level of the driver. If the driver says “I’m tired,” an activation program of energizing comfort control is started. The same sentence from the rear starts a well-being program.