It’s rare that I pay much attention to automaker infotainment and multimedia system updates at CES – usually there’s too much going on with autonomy, electrification and mobility services to give it much thought. This year, however, Mercedes-Benz had one of the most interesting announcements at the show with its new MBUX smart multimedia system and in-car voice activated assistant.

MBUX is not the underpowered, underwhelming voice input system carmakers have been pushing on consumers for around a decade now. Instead, it’s a learning, smart and connected platform built upon Nvidia’s powerful GPU technology. For maybe the first time, using an in-car infotainment system felt to me like an actual pleasure, rather than doing something that ranges from ‘bad’ to ‘adequate’ on the user experience scale.

Part of that is just the fact that the computers powering the system are capable enough to drive high framerate visuals, on screens with a high resolution that doesn’t leave things pixelated. For too long, infotainment systems in cars have relied on underpowered, cheap local chips to power their output, leaving software developers working at automakers with the unenviable challenge of shoehorning their work onto silicon that really shouldn’t be running an alarm clock, let alone vital apps and information displays you use while driving.

Scrolling and animations on the MBUX system’s two dash mounted displays (one in the center, and another behind the steering wheel) are silky smooth, and feel as responsive as an iPhone to touch input, which is a major achievement relative to typical first-party car touchscreen performance.

MBUX also focuses on simplicity when it comes to interaction: Even though it offers a lot of options and features, many of the things you want to do can be accessed directly from the top level main screen, including navigating to your home, playing a favorite music station, checking the weather and more.

Even when you do want to drill down to be more specific, there are shortcuts built in, thanks to the way MBUX learns your preferences and presents them through a “Suggestions” shortcut that’s just a tap away form the main screen. These will offer suggested destinations, music, cabin comfort settings and more based on what it learns about your habits, your schedule, and your preferences. They also follow the driver around, and are attached to their profile – which can even follow you from vehicle to vehicle if you’re switching between Mercedes cars equipped with MBUX.

Of course, there’s also the voice powered element, which you can trigger by saying “Hey Mercedes” at any time, or by pressing a button on the steering wheel. This allows you to issue voice commands in natural language, like saying “I’m cold” in order to have it increase the heat by two degrees, or asking it if you can wear flip flops next week to retrieve a local weather forecast. 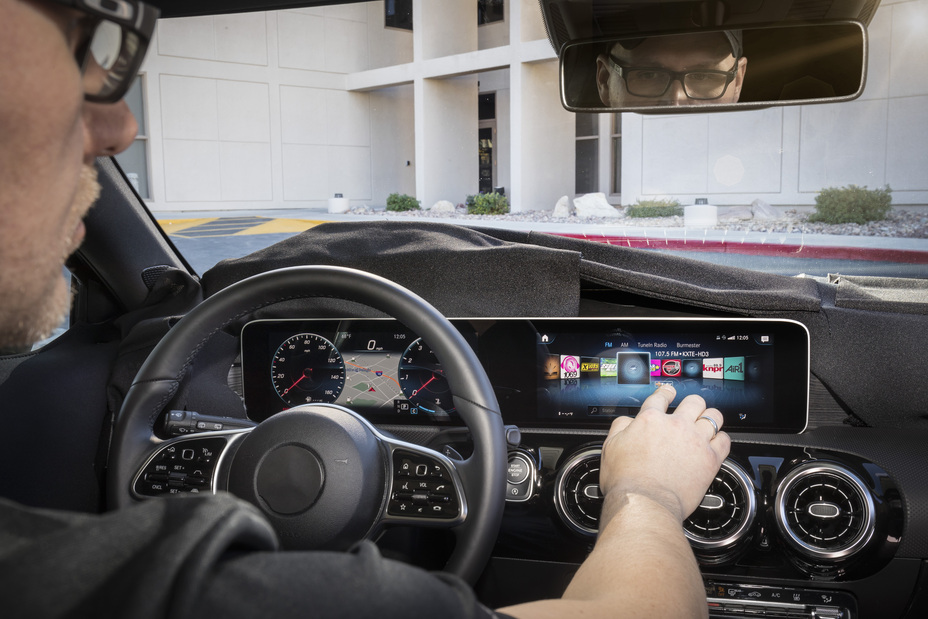 In practice, the voice commands worked well, though Las Vegas cellular service wasn’t always cooperating. Mercedes-Benz built its speech assistant with occasional connectivity in mind, however, so there’s a lot you can do even when you’re not connected to the cloud, including modifying cabin lighting and asking it to play specific songs from an attached USB drive, for instance.

Its capabilities are also designed to grow over time; the smart assistant is built using AI technology powered by Nvidia, and can improve both locally, and via software and feature updates pushed from the cloud. Mercedes-Benz also plans to issue significant feature additions to the system over the lifetime of the vehicle, and using Nvidia GPUs to power it mean they’ve actually got a lot of additional computing power to spare to support those updates.

Nvidia CEO Jensen Huang explained in an interview that his company has been working with Daimler directly for two years to bring this to fruition, with a dedicated engineering team set up for the purpose. Daimler VP of Digital Vehicle & Mobility Sajjad Khan also added that working with Nvidia was key to helping the company achieve something that was performant now, but also had plenty of room to grow.

In the end, MBUX is that rarest of beasts: A first-party infotainment system that’s exciting, powerful and extremely well-crafted from a technology perspective. If you’d have told me a week ago that one of my favorite things from CES would be an automaker’s infotainment software, I’d have laughed, but here we are.

MBUX will arrive first on the all-new A-Class when it arrives later this year, but it will also roll out to other new Mercedes vehicles after that.