Google said on Thursday it plans to offer credit to millions of merchants in India through its Google Pay app starting later this year as the American technology group looks to help small businesses in the country steer through the pandemic and also find a business model for its mobile payments service.

The company said it is working with financial institutions to offer loans to merchants from within Google Pay for Business app. The Google Pay’s business app, which the Android giant launched late last year, has already amassed 3 million merchants, it said.

Google’s announcement today comes as part of its effort to share its broader initiatives for small and micro-businesses in India.

The company said Google My Business, an app it launched in India in the second half of 2017 to help mom and pop stores and other small merchants build online presence, has been used by more than 26 million businesses in the country to list themselves on Google search and Maps. India has about 60 million small and micro-sized businesses in the nation, according to government estimates.

“Every month we drive over 150 million direct connections between these businesses and customers including calls, online reservations and direction requests,” company executives said.

New Delhi ordered a nationwide lockdown in late March in a bid to contain the spread of COVID-19. The move forced most businesses to suspend their operations. In recent weeks, the Indian government has rushed to relax some of its restrictions and many stores have resumed their businesses.

Last year Google launched the Spot feature in India that allows businesses to easily create their own branded commercial fronts that are accessible to customers through the Google Pay app. 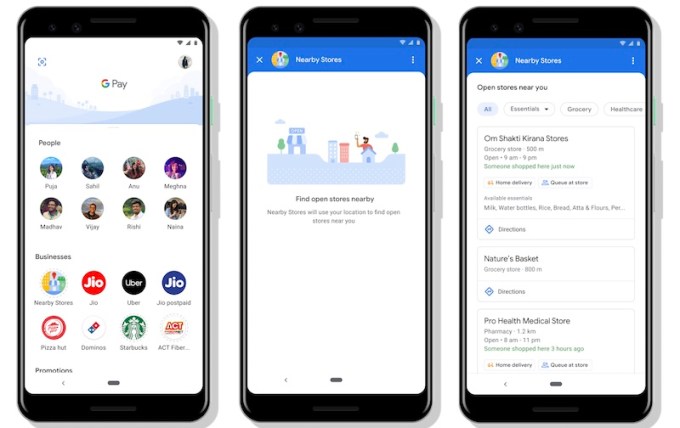 In May, Google introduced Nearby Stores as a Spot feature on the Google Pay app that allowed local businesses in select parts of the country get discovered by customers in their neighborhood. The company said it is expanding this offering across India starting today.

Thursday’s announcement also outlines the grip Google assumes on small businesses in India, and how its scale — and resources — could pose additional challenges for scores of local startups that are already attempting to serve businesses.

SoftBank-backed Paytm, Walmart’s PhonePe and New Delhi-based BharatPe have in recent years onboarded millions of merchants and offer them a range of services, including loans.

Paytm, which works with more than 16 million merchants, earlier this year launched a range of gadgets, including a device that displays QR check-out codes that comes with a calculator and USB charger, a jukebox that provides voice confirmations of transactions and services to streamline inventory management for merchants.

For some of these players, Google’s increasingly growing interest in targeting merchants means they will be facing off the search giant on two fronts. TechCrunch reported earlier this month that Google Pay had about 75 million transacting users in India, more than any of its competitors. But despite the scale, Google Pay and most other payments services in India are struggling to find a business model for their services.

Facebook, Google’s global rival, has courted more than 1 million merchants in India on its WhatsApp’s business app. WhatsApp, which is the most popular app in India, is informally used by countless additional merchants in the country.

For merchants, the more players the merrier. Small businesses in India continue to struggle to secure working capital from financial institutions, such as banks.