In India, it’s Google and Walmart-owned PhonePe that are racing neck-and-neck to be the top player in the mobile payments market, while Facebook remains mired in a regulatory maze for WhatsApp Pay’s rollout.

In comparison, SoftBank-backed Paytm’s app saw 30 million transacting users last month and an average of 10 million users transacted each day, people familiar with the matter said. Paytm has refuted these figures. TechCrunch could not determine daily transacting users of Google Pay and PhonePe.

Google still lags Paytm’s reach with merchants, but the Android-maker has maintained its overall lead in recent months despite every player losing momentum due to one of the most stringent lockdowns globally in place in India.

The company is facing a complaint in India over allegations that it is abusing its market position to unfairly promote Google Pay app in the country, Reuters reported last month.

Paytm, once the dominant player in India, has been struggling to sustain its user base for nearly two years. The company had about 60 million transacting users in January last year, said people familiar with the matter.

The Indian homegrown player said it had over 50 million monthly active users on its app in May, a spokesperson told TechCrunch. After the publication of this story, the spokesperson claimed that more than 50 million users transact on its app each month. The Information reported in January that Paytm had fewer than 40 million transacting users in December.

Paytm has struggled to grow in recent years in part because of a mandate by India’s central bank to mobile wallet firms — the middlemen between users and banks — to perform know-your-client (KYC) verification of users, which created confusion among many, some of the people said. These woes come despite the firm’s fundraising success, which amounts to more than $3 billion.

In a statement, a Paytm spokesperson said, “When it comes to mobile wallets one has to remember the fact that Paytm was the company that set up the infrastructure to do KYC and has been able to complete over 100 million KYCs by physically meeting customers.”

Paytm has long benefited from integration with popular services such as Uber, and food delivery startup Swiggy, but fewer than 10 million of Paytm’s monthly transacting users have relied on this feature in recent months.

Two executives, who like everyone else spoke on the condition of anonymity because of fear of retribution, also said that Paytm resisted the idea of adopting Unified Payments Interface. That’s the nearly two-year-old payments infrastructure built and backed by a collation of banks in India that enables money to be sent directly between accounts at different banks and eliminates the need for a separate mobile wallet.

Paytm’s delays in adopting the standard left room for Google and PhonePe, another early adopter of UPI, to seize the opportunity.

Paytm, which adopted UPI a year after Google and PhonePe, refuted the characterization that it resisted joining UPI ecosystem.

“We are the company that cherishes innovation and technology that can transform the lives of millions. We understand the importance of financial technology and for this very reason, we have always been the champion and supporter of UPI. We, however, launched it on Paytm later than our peers because it took a little longer for us to get the approval to start UPI based services,“ a spokesperson said. 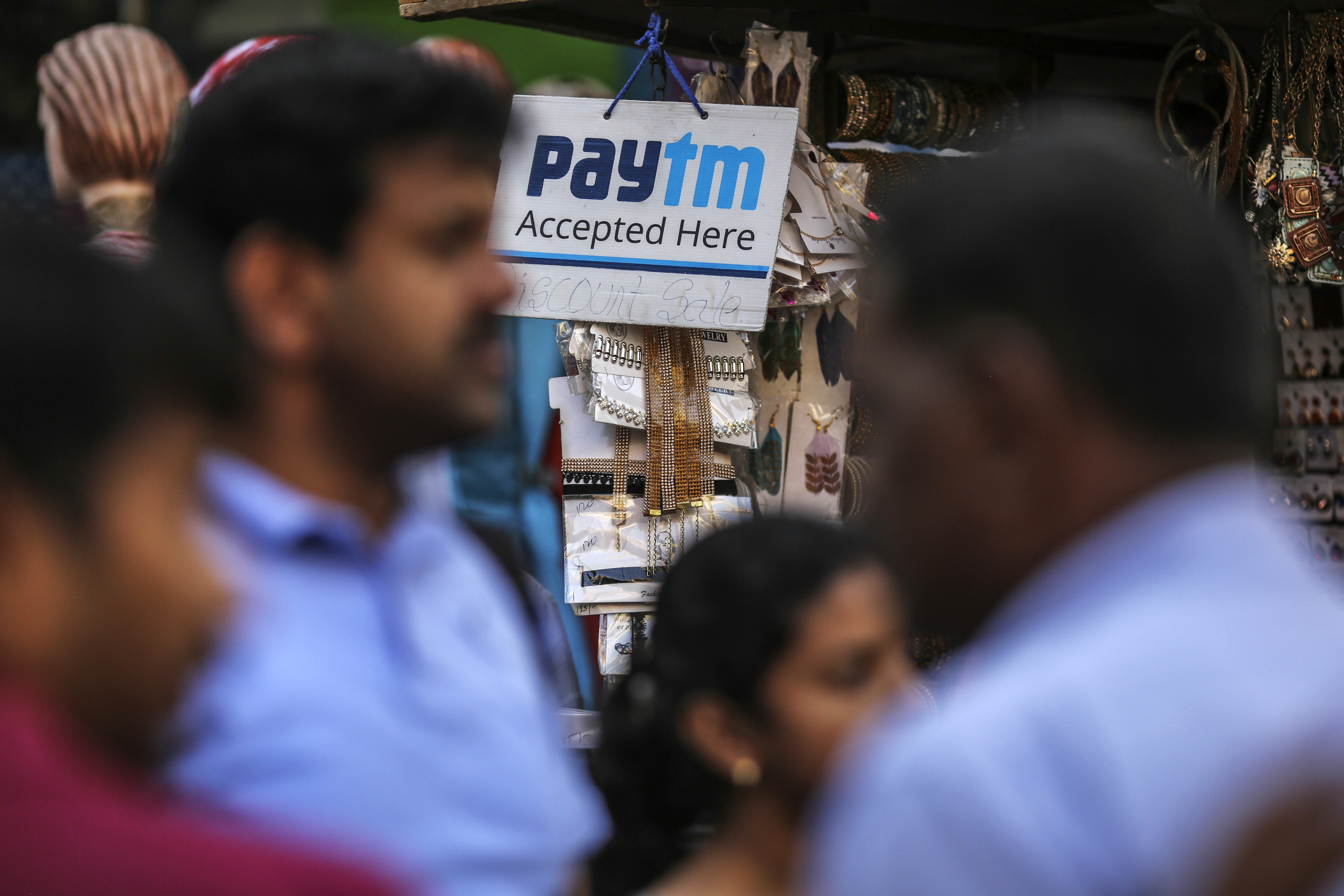 A sign for Paytm online payment method, operated by One97 Communications Ltd., is displayed at a street stall selling accessories in Bengaluru, India, on Saturday, Feb. 4, 2017. Photographer: Dhiraj Singh/Bloomberg via Getty Images

Missing from the fray is Facebook, which counts India as its biggest market by user count. The company began talks with banks to enter India’s mobile payments market, estimated to reach $1 trillion by 2023 (according to Credit Suisse), through WhatsApp as early as 2017. WhatsApp is the most popular smartphone app in India with over 400 million users in the country.

Facebook launched WhatsApp Pay to a million users in the following year, but has been locked in a regulatory battle since to expand the payments service to the rest of its users. Facebook chief executive Mark Zuckerberg said WhatsApp Pay would roll out nationwide by end of last year, but the firm is yet to secure all approvals — and new challenges keep cropping up. The company, which invested $5.7 billion in the nation’s top telecom operator Reliance Jio Platforms in April, declined to comment.

PhonePe, which was conceived only a year before WhatsApp set eyes to India’s mobile payments, has consistently grown as it added several third-party services. These include leading food and grocery delivery services Swiggy and Grofers, ride-hailing giant Ola, ticketing and staying players Ixigo and Oyo Hotels, in a so-called super app strategy. In November, about 63 million users were active on PhonePe, 45 million of whom transacted through the app.

Karthik Raghupathy, the head of business at PhonePe, confirmed the company’s transacting users to TechCrunch.

Three factors contributed to the growth of PhonePe, he said in an interview. “The rise of smartphones and mobile data adoption in recent years; early adoption to UPI at a time when most mobile payments firms in India were betting on virtual mobile-wallet model; and taking an open-ecosystem approach,” he said.

“We opened our consumer base to all our merchant partners very early on. Our philosophy was that we would not enter categories such as online ticketing for movies and travel, and instead work with market leaders on those fronts,” he explained.

“We also went to the market with a completely open, interoperable QR code that enabled merchants and businesses to use just one QR code to accept payments from any app — not just ours. Prior to this, you would see a neighborhood store maintain several QR codes to support a number of payment apps. Over the years, our approach has become the industry norm,” he said, adding that PhonePe has been similarly open to other wallets and payments options as well.

But despite the growth and its open approach, PhonePe has still struggled to win the confidence of investors in recent quarters. Stoking investors’ fears is the lack of a clear business model for mobile payments firms in India.

PhonePe executives held talks to raise capital last year that would have valued it at $8 billion, but the negotiations fell apart. Similar talks early this year, which would have valued PhonePe at $3 billion, which hasn’t been previously reported, also fell apart, three people familiar with the matter said. Raghupathy and a PhonePe spokesperson declined to comment on the company’s fundraising plans.

For now, Walmart has agreed to continue to bankroll the payments app, which became part of the retail group with Flipkart acquisition in 2018.

As UPI gained inroads in the market, banks have done away with any promotional incentives to mobile payments players, one of their only revenue sources.

At an event in Bangalore late last year, Sajith Sivanandan, managing director and business head of Google Pay and Next Billion User Initiatives, said current local rules have forced Google Pay to operate without a clear business model in India.

The coronavirus pandemic that prompted New Delhi to order a nationwide lockdown in late March preceded a significant, but predictable, drop in mobile payments usage in the following weeks. But while Paytm continues to struggle in bouncing back, PhonePe and Google Pay have fully recovered as India eased some restrictions.

About 120 million UPI transactions occurred on Paytm in the month of May, down from 127 million in April and 186 million in March, according to data compiled by NPCI, the body that oversees UPI, and obtained by TechCrunch. (Paytm maintains a mobile wallet business, which contributes to its overall transacting users.)

PhonePe and Google Pay together accounted for about 83% of all UPI transactions in India last month. UPI itself has over 117 million users.

Industry executives working at rival firms said it would be a mistake to dismiss Paytm, the one-time leader of the mobile payments market in India.

Paytm has cut its marketing expenses and aggressively chased merchants in recent quarters. Earlier this year, it unveiled a range of gadgets, including a device that displays QR check-out codes that comes with a calculator and USB charger, a jukebox that provides voice confirmations of transactions and services to streamline inventory management for merchants.

Merchants who use these devices pay a recurring fee to Paytm, Vijay Shekhar Sharma, co-founder and chief executive of the firm told TechCrunch in an interview earlier this year. Paytm has also entered several businesses, such as movie and travel ticketing, lending, games and e-commerce, and set up a digital payments bank over the years.

“Everyone knows Paytm. Paytm is synonymous with digital payments in India. And outside, there’s a perceived notion that it’s truly the Alipay of India,” an executive at a rival firm said.

The story was updated with additional data Paytm provided after the publication.