As Facebook continues to shrink from responsibilities that would see the company moderating political speech, Joe Biden has apparently had enough.

The presumptive Democratic nominee launched a campaign of sorts against Facebook leadership Thursday, with an open letter slamming Facebook’s decisions and a catchy hashtag, #MoveFastFixIt — a play on the company’s much maligned early slogan, “Move fast and break things.”

Folks, we saw in 2016 what can happen when social media platforms are left unchecked and allow disinformation to run rampant. It puts the very integrity of our elections at risk.

We simply cannot let it happen again in 2020.

In the broadside against the social network, Biden calls on his supporters — and perhaps more broadly, Facebook’s critics — to demand the platform stop promoting “fake news” (a favorite term of President Trump, applied differently here), move quickly to remove viral misinformation, act against content that could suppress the vote and to stop PACs and candidates from relying on Facebook ads to “spread lies,” particularly within two weeks of the election.

While most of the points are common criticisms of the social network, the proposal for a two-week “pre-election period” during which Facebook would fact-check political ads before allowing them to run is something new.

Facebook has taken a notoriously hands-off approach to political advertising. Twitter, which has diverged even more deeply from Facebook’s own platform policies in recent weeks, stopped allowing political ads altogether late last year. But even with Facebook’s chosen path, the two-week demand is a concession that Biden’s team might actually win given the company’s self-consciousness around its role in amplifying foreign disinformation during the 2016 presidential election. 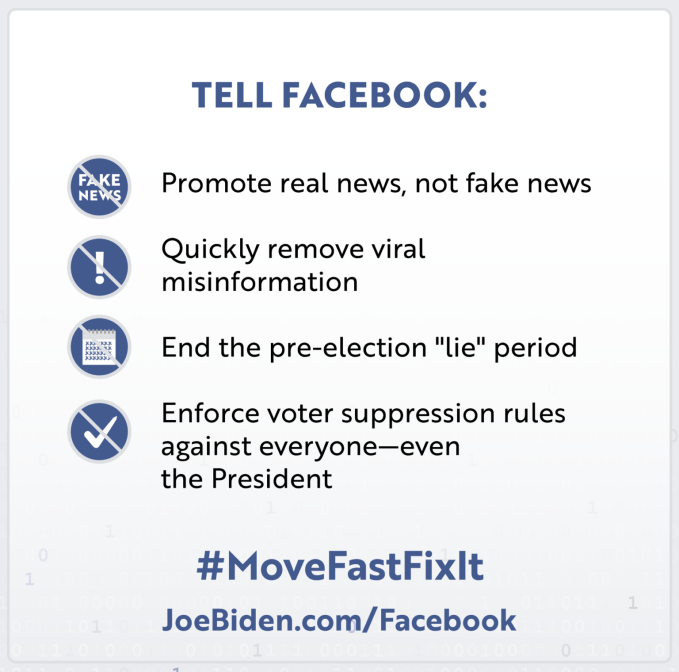 As part of its attack on the social network’s perceived failures, Biden is asking supporters to sign a petition joining his demands. The campaign even provides a direct link for anyone interested in sending a form letter calling for accountability from Facebook’s Twitter account via DM.

“With fewer than five months until the 2020 election, real changes to Facebook’s policies for their platform and how they enforce them are necessary to protect against a repeat of the role that disinformation played in the 2016 election and that continues to threaten our democracy today,” Biden campaign spokesperson Bill Russo said in a statement to TechCrunch. “We are urging our supporters to make their voices heard in this call for change.”

Update: Facebook issued a public response to Biden’s criticism. In a strange turn, it cites President Trump’s social media executive order from late last month, which, were it workable, would completely undermine critical legal protections for Facebook and other social networks. The full text:

We live in a democracy, where the elected officials decide the rules around campaigns. Two weeks ago the President of the United States issued an executive order directing Federal agencies to prevent social media sites from engaging in activities like fact-checking political statements. This week, the Democratic candidate for President started a petition calling on us to do the exact opposite. Just as they have done with broadcast networks — where the US government prohibits rejecting politicians’ campaign ads — the people’s elected representatives should set the rules, and we will follow them. There is an election coming in November and we will protect political speech, even when we strongly disagree with it.