Some Facebook employees are virtually walking out today to challenge the company’s lack of response to President Donald Trump’s posts pertaining to protests in light of the brutal killing of George Floyd. Employees participating in the protest requested time off and then added an out-of-office response to their emails notifying senders they are protesting, The New York Times reports. Facebook has since acknowledged the walkout and said it will not require employees to use their paid time off.

Last week, amid protests in Minneapolis against the police killing Floyd, an unarmed black man, Trump posted on both Twitter and Facebook that, “when the looting starts, the shooting starts.”

As The Washington Post reported, there is a racially charged history behind that phrase. In the sixties, a white police chief used that same phrase during civil unrest in black neighborhoods in Miami. Trump, however, claims to have not known that.

Twitter’s response was to apply a notice to his tweet, stating that it violated Twitter’s rules about glorifying violence.

Facebook, however, took a different approach. Its response was to do nothing. 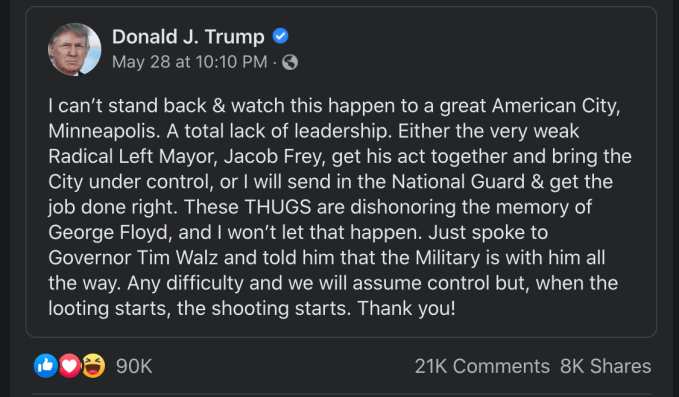 On Friday, Facebook CEO Mark Zuckerberg explained that the company’s policy “allows discussion around state use of force, although I think today’s situation raises important questions about what potential limits of that discussion should be.” Additionally, Zuckerberg said “we think people need to know if the government is planning to deploy force.”

Last week, after the White House announced its intention to issue an executive order designed to punish social media companies for Twitter’s decision to fact-check the president’s tweet, Zuckerberg drew a contrast between Twitter’s policy enforcement choices and Facebook’s own in a Fox News interview. In the interview, which aired the same day that Trump’s executive order intimidate to limit platforms from moderating their content was issued, Zuckerberg criticized tech platforms that would act as the “arbiter of truth” for things people say online.

In addition to the protest today, employees have circulated petitions that call for Facebook to add more diversity to its ranks, while others have threatened to resign if Zuckerberg does not reverse his stance. A handful of Facebook employees also spoke out against the company on Twitter, including Facebook’s head of design for Portal Andrew Crow. “… Giving a platform to incite violence and spread disinformation is unacceptable, regardless who you are or if it’s newsworthy,” Crow said. “I disagree with Mark’s position and will work to make change happen.”

Internal unrest at Facebook leaking out in the open is a relatively rare phenomenon. While other big tech companies have faced more open dissent in the last few years over political and ideological divides, Facebook employees generally close rank and keep their grievances within the company’s walls.

On Sunday night, Director of Product Management Jason Toff tweeted that he was “not proud of how we’re showing up.” “The majority of coworkers I’ve spoken to feel the same way. We are making our voice heard,” Toff said. Katie Zhu, an Instagram employee, took Monday to raise money for racial justice causes, tweeting “i’m deeply disappointed & ashamed in how the company is showing up the world rn.”

Zuckerberg responded to internal frustration and escalating clashes between protesters and police by announcing that Facebook would donate $10 million to groups fighting for racial justice in the U.S. The company has a market capitalization of more than $650 billion.

“We recognize the pain many of our people are feeling right now, especially our Black community,” a Facebook spokesperson said in a statement. “We encourage employees to speak openly when they disagree with leadership. As we face additional difficult decisions around content ahead, we’ll continue seeking their honest feedback.”