Facebook’s internal R&D group, NPE Team, is rolling out yet another new app today called Collab after having just launched a new group audio calling app, CatchUp, on Tuesday. With Collab, the focus has now returned to video, and specifically, the concept of watching, mixing and matching original videos together, beginning with music.

In Collab, creators can either record their own musical arrangement or swipe to discover arrangements to build a composition, or a “collab.” While there are some elements of TikTok’s duets in this idea, the difference is that all videos posted to Collab can be mixed and matched with others. TikTok, meanwhile, allows creators to control who can duet with them.

In addition, Collab is only designed for making original music videos for the time being, which sets it apart from other video apps — including TikTok, Dubsmash, Triller and more, which have users creating content to the music from popular songs available via an in-app catalog.

Though focused on music, you don’t necessarily have to be a gifted musician to publish to Collab. You could participate by doing something simple — like banging on a child’s xylophone, beating a tambourine, pulling on a roll of tape, tapping a glass bottle or even just tapping your foot. Musicians could then use that video alongside their own content to build their “collab.”

The collabs can only be up to 15 seconds in length, as this is not intended to be a professional music-making platform, but rather one that’s used for fun and experimentation.

Once users have created a collab, they can publish it for others to watch in the app’s feed or to further remix. However, the underlying music itself cannot be remixed — only the videos. The resulting collab can also be published to other social media platforms, including Instagram, Facebook Stories and more. The app uses the iOS Share Sheet, so that means it could even export to TikTok — in other words, it’s not a direct answer to TikTok but a way to capitalize on the larger network of video creation tools that are emerging because of TikTok’s growth. 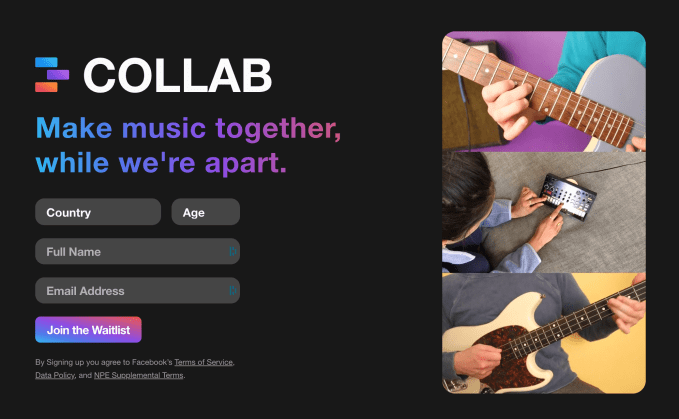 There are a number of existing apps that allow users to collaborate with others on music, including by mixing sounds, making recordings and arranging compositions. But these tend to be digital audio workstation (DAW) software programs, or at least those aimed at semi-professional to professional musicians. Spotify’s Soundtrap is one example. BandLab, Endless, Bandpass and Kompoz are a few others. Vampr, meanwhile, helps musicians discover new collaborators. Collab, meanwhile, is more open to mainstream users — including those who play music for fun or are just fans of music in general.

Facebook says it has been working on Collab for a few months, but hurried the launch in light of so many people being sheltered in place around the world due to the coronavirus pandemic.

“Digital spaces can connect us when we can’t be together in person, and Collab is a new way to create together,” a Facebook company spokesperson said about the launch.

However, the app itself is not ready to rapidly scale, which is why it’s being released today as an invite-only beta.

The company notes there’s still work that needs to be done to polish the app’s experience, but the team will be iterating on the product and responding to user feedback going forward. More people will be able to join Collab as invites roll out in batches. Access to the waitlist is here.

Prior to CatchUp, apps were launched with little fanfare, but now Facebook is publicly announcing their debuts and answering questions. That’s a change in strategy for the team, and one that could point Facebook’s desire to capitalize on users’ hunger for new social and entertainment experiences while stuck at home due to the COVID-19 outbreak.

Collab is available as an invite-only beta on iOS in the U.S. and Canada.