The app is available for download in the U.S. and Canada, app analytics firm Sensor Tower tells us. Tuned was developed and released by Facebook’s New Product Experimentation (NPE) team. The division is — as the name suggests — very experimental and thus a bit quicker to pull the plug on projects if they don’t show traction.

The Tuned app arrives during a very interesting time for couples. Couples that live together are spending every waking moment in each other’s presence in the midst of quarantine and could probably never have less of a need for an app like this. For couples that don’t live together, there’s more of an appeal, as people are emboldened to build out digital toolsets to stay close with their partners during an unprecedented time. 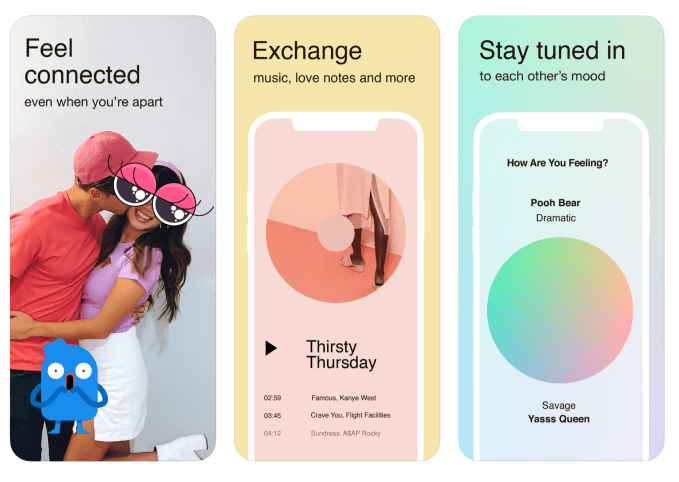 The app is by all means just a messaging app that’s more focused on pushing updates and stickers to a singular person. Users can also integrate the app with Spotify to share songs, or use dedicated widgets to share how they’re feeling or what they’re up to. The company refers to the app’s feed as “scrapbook-style.”

It’s not integrated with the company’s dating platform, Facebook Dating; in fact, the most interesting quality of the app is the sheer lack of Facebook tie-ins.

For years, Messenger was the testing bed for Facebook’s social curiosities, but Messenger became too important and users weren’t responding positively to constantly seeing nominal changes in an app they frequently used. The issue is Facebook doesn’t have a default experimentation app anymore, and so these NPE team releases kind of force Facebook to get by with less user data and make judgment calls on how fast functionality can develop when starting from a standstill. It’s unclear how successfully this strategy is progressing. NPE Team’s only other release that’s still available, a Pinterest competitor named Hobbi, was released two months ago and has only received one review on the App Store — a one-star review.