Quibi, the oddly-named mobile streaming service founded by Jeffrey Katzenberg, was downloaded over 300,000 times on launch day, according to preliminary data from app store intelligence firm Sensor Tower. That’s only 7.5% of the approximately 4 million installs Disney+ saw when it launched in the U.S. and Canada on November 12, 2019. However, it was enough to send Quibi’s app to nearly the top of the charts on the App Store. Today, Quibi is the No. 3 app on the Apple App Store, but only No. 29 on Google Play.

The bigger jump up the charts on iOS could be attributed to Quibi being heavily promoted by App Store editorial across a number of sections at launch. This includes in a large, scrollable banner at the very top of the “Apps” page on the App Store, as well as inclusion in the curated “Apps We Love Right Now” collection directly below. That likely drove a number of day one downloads from curious App Store visitors.

Apple’s interest in promoting Quibi has to do with it being a subscription-based product, which is a source of revenue for the App Store. Though Quibi’s streaming service is available for the first 90 days for free and free for a year for T-Mobile unlimited wireless customers, it will later require an in-app purchase of either $4.99 per month or $7.99 per month for either its ad-supported or commercial-free streaming plan, respectively. 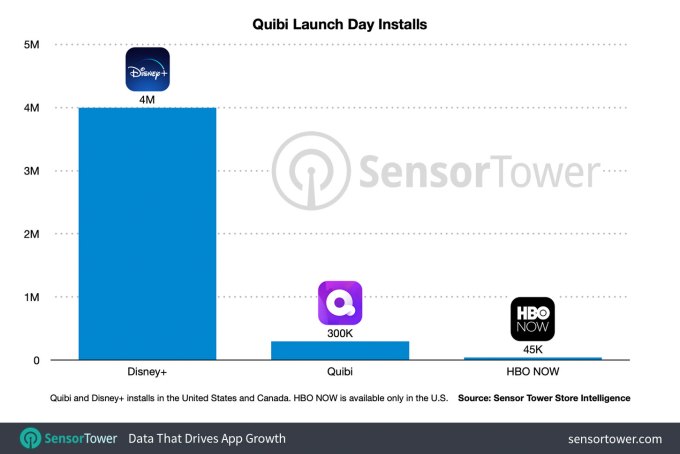 Sensor Tower also noted that Quibi’s debut was far ahead of HBO NOW’s launch back on April 7, 2015, five days before the “Game of Thrones” Season 5 premiere. But that’s perhaps not the best comparison. Not only did that event take place several years ago, HBO NOW was then only one of several ways to watch HBO content. The majority of the network’s viewers at the time already had access to HBO through their pay-TV subscription — and if they wanted to watch on mobile, they could use the existing HBO GO app to do so.

Quibi, on the other hand, is only available through mobile. So this 300K figure represents its total customer base at launch, not just some small portion looking for an over-the-top option.

Before yesterday’s debut, Quibi had offered its app for pre-order through the App Store in an effort to boost day one downloads. It’s unclear how well that effort paid off, but Sensor Tower says it front-loaded a “significant number” of launch day downloads.

The app itself offers a lot of star power with big names including Sophie Turner, Liam Hemsworth, Chance the Rapper, Jennifer Lopez, Chrissy Teigen and others appearing in Quibi’s shows available today. And thanks to Katzenberg’s connections and (Quibi’s massive $1.75 billion in funding) Quibi promises content from filmmakers like Steven Spielberg, Guillermo del Toro, Lena Waithe and Catherine Hardwicke and other stars will arrive soon.

But consumer demand for a mobile streaming service designed for our busy, on-the-go lives where we only have minutes of downtime to spare is something that’s no longer relevant in the quarantine era where we have endless hours to binge TV at home. And Quibi is currently without an AirPlay or Chromecast option, which makes it a poor choice for stay-at-home viewing.

The 300K downloads is an early figure, to be fair. It won’t be clear until the 90-day trial wraps how many stay with Quibi, choosing to pay. But Qubi’s launch numbers don’t indicate a breakout success, either. Quibi may be at the top of the charts for now, but it still has a lot to prove.