The company has been in the headlines for more than two years, thanks to the involvement of founder Jeffrey Katzenberg (who previously co-founded DreamWorks Animation) and CEO Meg Whitman (previously the CEO of eBay and Hewlett Packard Enterprise).

Quibi is launching with nearly 50 shows today. The initial lineup includes “Chrissy’s Court” (in which Chrissy Teigen presides over small claims court), “Shape of Pasta” (a food and travel show starring chef Evan Funke), “Most Dangerous Game” (a dystopian thriller starring Liam Hemsworth) and “Survive” (a scripted plane crash drama starring Sophie Turner). All the episodes are less than 10 minutes in length, and can be viewed in either portrait or landscape mode.

Quibi says it will be delivering more than 25 new episodes every day, including segments of what the company is calling Daily Essentials — news and entertainment shows like “Last Night’s Late Night” from Entertainment Weekly and “The Replay” from ESPN.

The service will cost $4.99 with ads or $7.99 per month without ads. Quibi is also offering a 90-day free trial if you sign up before the end of April. 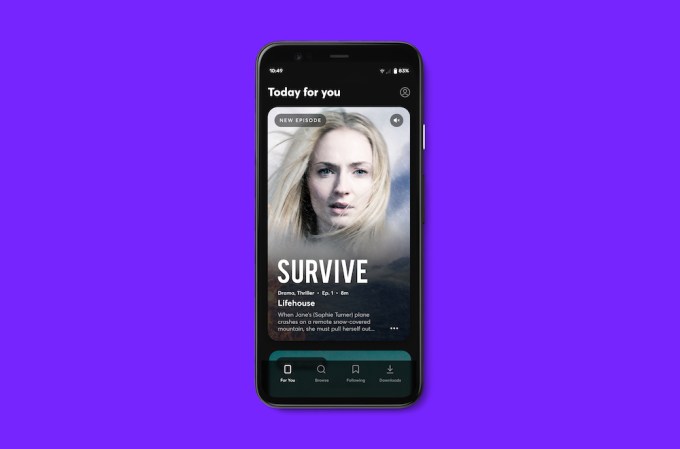 In a briefing with reporters last week, CTO Rob Post acknowledged that it’s been a long, expensive road to launch. But he said that given the heavy investment in content, “There was no room for [Chief Product Officer Tom Conrad] and I to deliver a minimum viable product.” Instead, they had to build something that was fully polished.

While Quibi has been building up to this for months, with a big presentation at the Consumer Electronics Show, Super Bowl ads and more, the world has changed, with a global pandemic making this a strange time to launch any product.

People are certainly looking for distraction and escape right now. But the app is designed for viewing while you’re on-the-go, whether that’s walking around, waiting in line or sitting in the backseat of a car — all moments that are happening considerably less often as huge swaths of the population are advised to shelter in place and maintain social distance.

Still, Post argued that there’s a need for the kind of entertainment that Quibi is offering.

“I’m looking to take small breaks more than ever before to stand up, walk around, go outside,” he said. “Our use cases are these in-between moments. Now more than ever, that use case is still present.”

And of course, these restrictions have also created challenges for Quibi’s launch and content production.

“That’s meant all kinds of things,” Conrad said. “Our Daily Essentials, which were all set to be produced in studios in New York and L.A. each day, in most instances are being shot in people’s homes … Everybody from the production team to postproduction houses to the engineering and marketing organizations are trying to adapt to this moment.”

Quibi has already been showing off is Turnstyle technology, which allows for a seamless transition back-and-forth between portrait and landscape modes. (Apparently Quibi’s filmmakers have to deliver two edits of each episode, one optimized for each orientation.) Last week, the company gave reporters access to the full app.

Judging from a few hours of exploration, Quibi is indeed as polished as Post and Conrad promised, making it easy to swipe through and browse the day’s offerings. Turnstyle also works smoothly, with a blink-and-you’ll-miss-it transition every time I rotate my phone.

I quickly noticed, however, that I was torn between the two viewing modes. Portrait mode was more comfortable, particularly when I was watching a full seven- or eight-minute episode, but landscape mode looked much more cinematic, and often included imagery that had been cropped out of the more narrow, vertical footage. 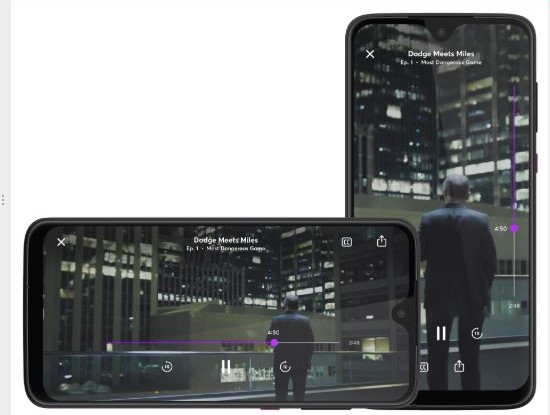 In addition, the focus on a smartphone app — rather than an experience for the browser, tablet or connected-TV — made for a clumsy experience anytime I tried to watch with someone else. (The whole point is to focus on the mobile viewing experience, but Conrad said, “If there’s appetite for Quibi in the living room or on tablets, we certainly will follow that interest as the data reveals.”)

As for the content itself, my favorite show was probably “Most Dangerous Game,” which kicks off with a tantalizingly bleak introduction (the premise will be familiar to viewers of the classic film of the same name). I also enjoyed “Shape of Pasta,” which includes plenty of mouth-watering pasta footage, and”Chrissy’s Court” — Teigen is always delightful, and I liked seeing a courtroom reality show that leans more into humor than drama.

At CES, Whitman positioned Quibi as the first platform to truly take advantage of the new creative opportunities that mobile phones offer to filmmakers. She also emphasized that in contrast to free video platforms like YouTube, Quibi will offer “Hollywood-quality content.”

“[YouTube] is the most ubiquitous, democratized, incredibly creative platform,” Whitman told us. “But they make content for hundreds of dollars a minute. We make it for $100,000 a minute.”

The production value is certainly evident — most of the shows I watched look significantly more expensive that what you’ll find on YouTube. What’s missing so far, however, is any real sense of the creative breakthrough that Whitman was hinting at. Instead, Quibi delivers well-produced, moderately entertaining shows that can be watched when you’ve got a few minutes to spare. They’re fine, but rarely more than that.

Maybe that will be enough for most viewers, particularly during the trial period. The challenge will be convincing those viewers to stick around and pay a subscription fee. To do that, I suspect Quibi will need a breakout show, or something that really takes advantage of the phone in a new way. We’ll see if that arrives in the months to come.