Brizzly, the name associated with a long-gone Twitter client, and later, a goofy project highlighting our addiction to social media, is coming back. And this time, it’s focused on serving the needs of Twitter power users in search of features Twitter itself has failed to build — like an Edit button and an auto-deletion option for tweets, among other things.

These features and more are a part of a new subscription service, Brizzly+, which offers a robust toolset built on the Twitter API.

But the most in-demand feature is Brizzly’s version of an Edit button for tweets.

Twitter, for whatever reason — complexity, confusion or just not caring — has consistently refused to build an Edit button, despite the feature being a top request among Twitter users who want to correct typos in their tweets. That left third-party Twitter apps to step in to meet users’ needs. In the third-party Twitterific app, for example, the company worked around the problem by adding a “Delete and Edit Tweet” action that would let you correct a tweet by replacing it with a new one. 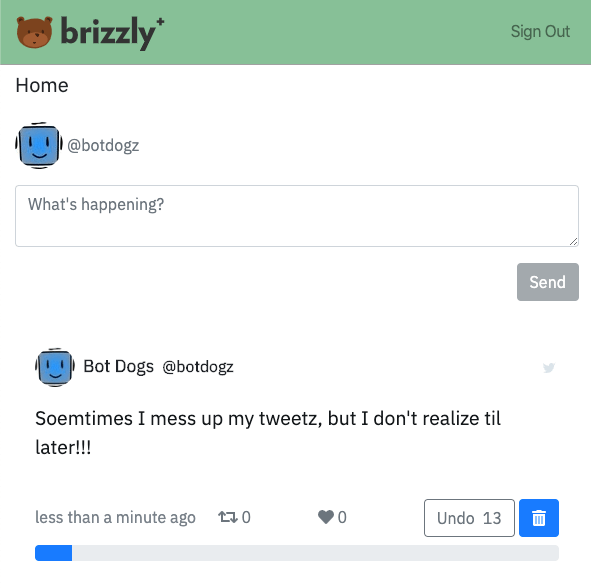 Brizzly+ handles the edit tweet feature a bit differently, however. According to Brizzly founder Jason Shellen, former head of Product at Slack, the Brizzly+ “Undo” feature involves the client briefly storing your tweets before posting them. This allows you to go back and make corrections as needed before they go live. You can even configure how long of a delay you need, which can be anywhere between 10 seconds and 10 minutes.

Another feature called “Redo Tweet” will help you to fix your typoed tweets after they’ve gone live. This works more like Twitterific, as it deletes the old tweet and replaces it with a new one. But Brizzly+ helpfully copies the post into a new field, allowing you to make the changes quickly.

Auto-deleting tweets has become a more in-demand request among Twitter users in recent years. In part, this is because things posted online years ago on the then much smaller social network today may come across as too personal, too oversharing or just embarrassing. But some high-profile Twitter users have also been targeted by critics who dug up old tweets to shame them. One of the more notable examples was the 2018 firing of director James Gunn from the “Guardians of the Galaxy” franchise after Twitter users pulled up a series of past, offensive tweets. Gunn was later reinstated, but the campaign to take him down raised awareness of how older tweets could be problematic.

A number of services are available today that focus on mass-deletion or auto-deletion or both. Some even have hundreds of thousands or even millions of users, according to a 2019 story by The New York Times.

With Brizzly+, Twitter users can opt to instead just have their tweets automatically erase themselves after 24 hours. Once enabled, the feature turns Twitter posts into ephemeral instead of permanent content. That’s similar to something Twitter itself is now testing with its Stories-like feature, called “Fleets.” But Fleets are a part of a separate product, so they don’t really address users’ concerns over their tweeted content.

There’s also a handy addition to the Brizzly+ auto-delete feature called “Fave to Save.” This allows you to set a threshold of likes for your tweets in order to prevent them from being auto-deleted. The option may make sense for people who are less concerned with their tweets’ content, but want to seem more popular on Twitter by highlighting their best content when you visit their profile.

Finally, for a little fun, Brizzly+ lets you replace Twitter’s “What’s happening?” prompt in the edit window with a custom phrase of your own choosing.

Brizzly’s founder Jason Shellen has worked on a number of top social and communication apps over the years — most recently, Slack. Earlier in his career, he worked at Pyra Labs, maker of Blogger, which sold to Google in 2003. At Google, he continued to work on Blogger, created Google Reader and helped Google acquire companies like Feedburner, Picasa and Measure Map. After Google, Shellen sold his startup Thing Labs, maker of Brizzly, to AOL in 2010, where he stayed to work on AIM and messaging. His next startup, Hike Labs, sold to Pinterest.

Shellen bought back Brizzly from AOL/Oath (Oath became Verizon Media, which also owns TechCrunch). In 2018, he relaunched it for a joke before developing Brizzly+. That original post-to-nowhere version of Brizzly remains, but is now called Brizzly Zero.

The new Brizzly+ subscription service costs $6 per month, which reduces to $5 per month when billed annually. It’s also offering a two-week free trial.

For now, Brizzly+ is only a web client, but the company lists a native iOS app among the ideas it’s planning to work on next, along with image upload, dark mode, tweet history deletion and others.

Twitter has had a contentious history with third-party clients, even actively trying to shut them down at times. But interestingly, Twitter has been expressing support for Brizzly+.

Our friends @Brizzly are back! We’re excited about their new Tweet compose & auto-deletion tools. They even built…an edit feature!🙃 Check them out 👇 https://t.co/p7Hbt4qxPF

“We love to see developers building things that improve on a core piece of Twitter — like Tweet compose. They’re helping people do things that weren’t otherwise possible,” said Ian Cairns, head of Product for Twitter’s Developer Platform, in a statement shared with TechCrunch. “This was one of the best parts of the Twitter API in the early days, and we know we haven’t always made it easy. We’re starting to change that,” he added.