The app industry is as hot as ever, with a record 204 billion downloads in 2019 and $120 billion in consumer spending in 2019, according to App Annie’s recently released “State of Mobile” annual report. People are now spending 3 hours and 40 minutes per day using apps, rivaling TV. Apps aren’t just a way to pass idle hours — they’re a big business. In 2019, mobile-first companies had a combined $544 billion valuation, 6.5x higher than those without a mobile focus.

This week, we’ll look at the coronavirus outbreak’s impact on the App Store, China’s demand for App Store removals — and soon-to-be-removals, it seems. We’re also talking about Facebook’s lawsuit over a data-grabbing SDK, Tinder’s new video series, the TSA ban on TikTok, Instagram’s explanation for its lack of an iPad app and how Democratic presidential primary candidates are performing on mobile and social, among other things. 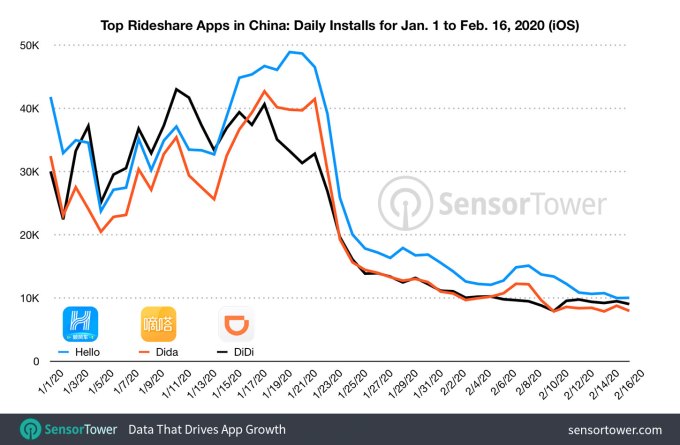 One of the many economic fallouts related to COVID-19 coronavirus concerns is a significant decline in the usage of Chinese ride-hailing applications. According to Sensor Tower data, downloads of the three most popular apps — Hello, Didi and Dida — were down 75% year-over-year during the week of February 10 compared with the same time frame in 2019. Meanwhile, people staying home have been ordering food and groceries more often. Overall downloads of the top 10 apps in the food-ordering category increased by 68% from January 13 to the week of February 3.

Also on the rise are mobile games. According to a recent report by the FT, users in China downloaded a record number of games and apps as the virus outbreak confined people to their homes. More than 22 million downloads were registered in Apple’s App Store in China during the week of February 2, according to App Annie, and average weekly downloads during the first two weeks of February were up 40% over the same time last year.

Meanwhile, Chinese tech giants, including Alibaba and Tencent, have been deploying health-rating systems to help authorities track the movements of millions of Chinese. Alibaba had been tapped to explore the rollout of a rating app to help the government control who can travel into and around the city. Along with Ant Financial, it worked to develop a smartphone-based rating system in conjunction with the government of Hangzhou. Tencent created a program for Shenzhen, reported The WSJ.

Plague Inc., a simulation game with more than 130 million players, was pulled from the Chinese App Store this week, a move that appears to be linked to the coronavirus outbreak. The company behind the game, Ndemic, posted a statement announcing that the game’s content is now considered “illegal in China as determined by the Cyberspace Administration of China.” Ndemic says it’s trying to reach out to find out what, specifically, it could change in order to get the game back in China.