The millennial obsession with wellness and self-care has led to a booming business for meditation apps. In the first quarter of 2018, app intelligence firm Sensor Tower reported the top 10 “self-care” apps had pulled in some $27 million in revenue. Fast-forward to the end of 2019, and the numbers have gotten much higher. According to Sensor Tower’s latest data, just the top 10 highest-grossing meditation apps of 2019 — a subset of “self-care” apps — grew to $195 million. That’s a 52% year-over-year increase.

Meditation apps were already leading the self-care app market back in 2018, with apps like Calm, Headspace and 10% Happier driving revenue. Other self-care apps focused on mindfulness or yoga were popular as well, but further down the charts. 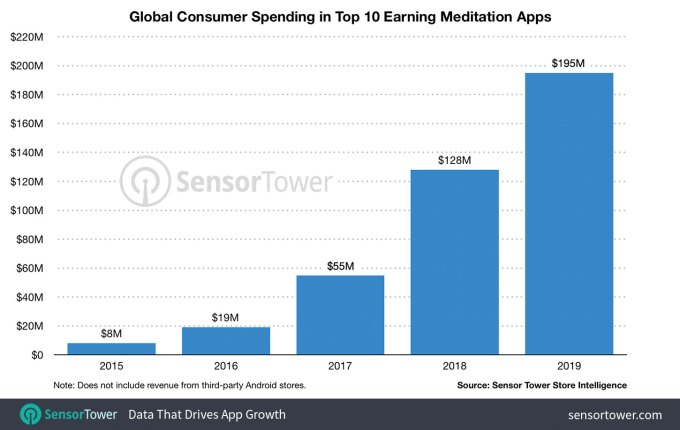 The revenue growth comes from not only an active user base, but from those who are still finding these apps for the first time. In 2019, 52 million first-time users downloaded one of the top 10 meditation apps, for example, up 15.6% from 2018. Calm and Headspace led the way here, as well, with 24 million and 13 million new users in 2019, respectively. 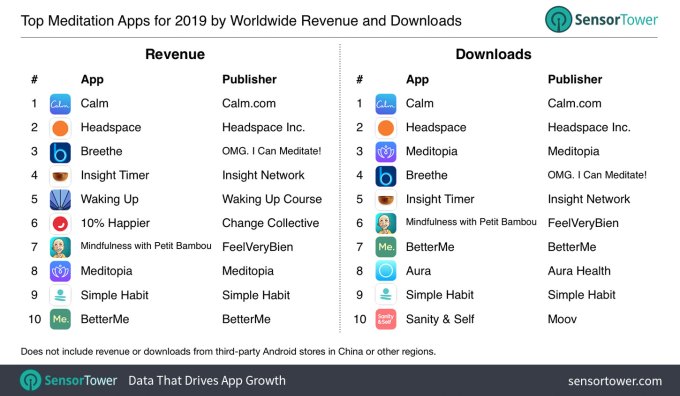 Despite their popularity, self-care isn’t a top-level category on the App Store. Instead, the apps are usually listed in the “Health & Fitness” category alongside exercise apps, dieting apps and calorie counters, fitness trackers and others.

But the apps still do well. At present, Calm is the No. 1 “Health & Fitness” app in this category and Headspace is No. 5 on Apple’s iOS App Store.

There are a number of reasons why these apps have become so popular in recent years. To some extent, it could be tied to millennials’ lifestyles. This demographic chose to marry later in life and delay having children. That gave them more time to remain self-focused, compared with prior generations. They’ve also grown up with internet access, giving them the ability to learn more about wellness and self-care, in general.

In addition, always-on internet connectivity is reported to lead to anxiety and depression — depending on how screen time is used by the individual. While screen time alone doesn’t cause harm, the way it’s used can. Self-care apps, and particularly meditation apps, help assuage these sorts of problems. (Though, we should point out, they are not a solution for mental illnesses.)

The apps have also benefited from the shift to subscriptions, in terms of growing their revenue. Over time, the category is likely to grow further.

Update: After publication, Sensor Tower updated the graph to include a meditation app that was left off, Meditopia. The article has been updated with the corrected chart. 1/31/20